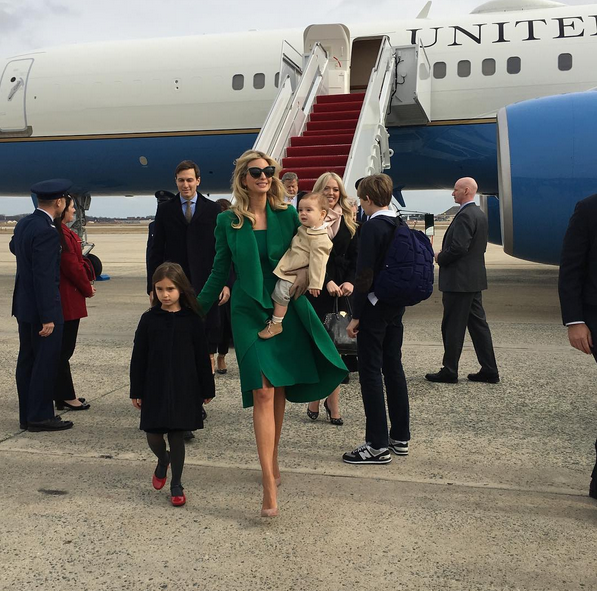 In this viral photo posted on Ivanka’s Instagram page the day before the Inauguration, America’s new first daughter channels the Duchess rather mightily.

In the picture, Ivanka is rocking the whole Duchess package: walking down the red-carpeted steps of a private jet in nude stilettos and a gorgeously tailored outfit, with an incredibly intact blowout with a babe on one hip and a child holding her other hand.

There are entire Google image archives devoted to pictures of the Duchess coming down airplane steps with babies and toddlers in tow. Wherever she goes, her airplane exit often becomes one of the most photographed moments of her and Prince William’s trip. On my favorite parenting blog, there is a post entirely about this subject, aptly titled, “Kate Middleton walking down planes.” The poster writes:

“I always see pictures of [her] in towering heels, baby on arm and walking down steep stairs as she comes out of airplanes and gasp. It seems a bit precarious to me to try to balance on heels, keep your poise and smile for the cameras while keeping a firm grip on a toddler as you make your way down a steep staircase in windy conditions.”

It is precarious. It’s also precarious trying to be both a mom and a public figure in today’s world: yet another parallel of mastery between Trump and Middleton.

Kate Middleton has done an exceptional job of making motherhood glam again. Unlike American celebrity moms, she doesn’t post on social media about being covered in throw up and never getting any sleep. She doesn’t complain in interviews about the travails of parenting. She doesn’t post the makeup-less 3 a.m. selfie that is supposed to make us think she is a “real mom” like the rest of us. Yes, she has the royal P.R. straight jacket on, and yet, she demonstrates her authenticity in motherhood with the obvious care she puts into her children and the genuinely warm way she behaves with them, even under the camera’s glare. She commits the ultimate crime in today’s post-feminist world: She appears to enjoy being a mom, and lets the media run with that perception.

Like Middleton, Ivanka has allowed herself to be very much defined by her role as a mom. While Ivanka has a demanding career, she seems proud to let the paparazzi make a fuss over her family life too, occasionally doing what Middleton does not, sharing a more candid and makeup-free moment with her kids with the world.

But both women also share the fact that they juggle life as public figures with life as young moms, while maintaining a feminine confidence and grace. It’s easy to scoff at Middleton’s lack of a career, but she is one of the most scrutinized women in the world. And she stands as a shining example to women the world over who are more interested in the job that Ivanka Trump recently called “the most important job a woman can have,” the job of being a mom, over any particular job in the workforce.

Trump offers a different example in having a demanding job that is about to become a lot more influential with her father in the White House. Even before her dad was elected, she was busy helping him shape a paid-leave plan for moms that might actually stand a chance of being passed in a Republican-controlled Congress.

But even if it fails, just by being a proud, happy, and glamorous mom, Ivanka Trump is already doing her share to help make motherhood great again.