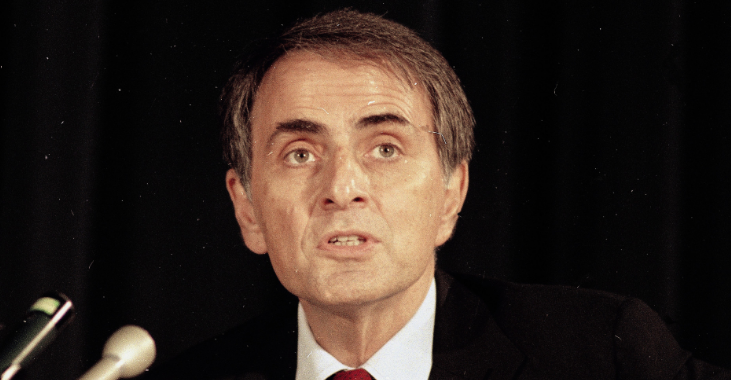 Carl Sagan died more than 20 years ago, but a prediction the American scientist and writer made shortly before his death could lead one to believe he caught a glimpse of a 2017 newspaper.

While Sagan’s most famous work was the science fiction novel Contact, the inspiration for the 1997 film starring Jodie Foster, it’s a passage from one of his lesser known works that is causing commotion.

Here is what he wrote in The Demon-Haunted World: Science as a Candle in the Dark, a work published posthumously in February 1997:

“I have a foreboding of an America in my children’s or grandchildren’s time – when the United States is a service and information economy; when nearly all the key manufacturing industries have slipped away to other countries; when awesome technological powers are in the hands of a very few, and no one representing the public interest can even grasp the issues; when the people have lost the ability to set their own agendas or knowledgeably question those in authority; when, clutching our crystals and nervously consulting our horoscopes, our critical faculties in decline, unable to distinguish between what feels good and what’s true, we slide, almost without noticing, back into superstition and darkness.”

It’s impressive. The prediction is so spot on, I suspected it was bogus. (It’s legit.)

Sagan had the foresight to see the precipitous decline of manufacturing, the erosion of our critical faculties, the increasing prevalence of propaganda (and our susceptibility to it), and a general decline in our ability to reason.

We’ve made many of these same observations at Intellectual Takeout. (Here, here, and here, for starters.) Yet it would be a mistake to assume that this general decline of thinking presupposes a particular way of thinking. I say this because Sagan’s own assumptions and reasoning were at times overwrought.

An example: While I’ve not read The Demon Haunted World, a review of the book conducted by Smithsonian magazine offers a glimpse of Sagan’s own tendency to slip into dogmatic thinking:

Sagan splits his universe in two, into science and irrationality. “Truth” is only what can be experimentally proved, and “understanding” is only what fits into the logical straitjacket of a syllogism. This may work beautifully within the scope of questions that science can answer, but life is a far richer tapestry than the threads of scientific logic alone can weave. And it is myopic to define “reason” so narrowly that one can’t see the other threads.

The line between science and scientism is one that Sagan was prone to crossing. He was a smart guy and I enjoyed the fruit of his work, but I suspect Sagan at times “nervously clutched his crystal” in much the same way as many of the people he derided.