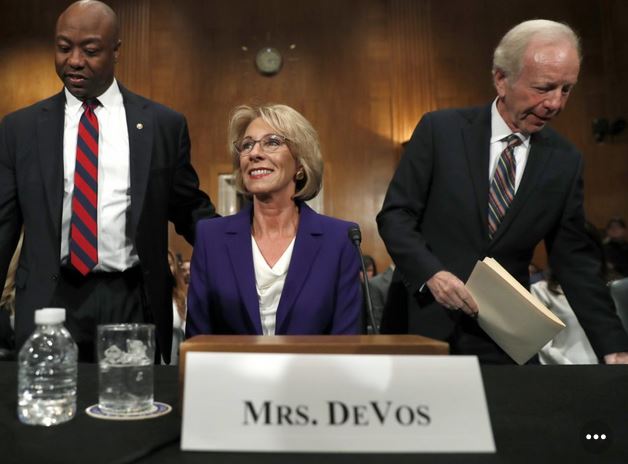 Over the past few weeks, the political and media controversy has primarily centered around Donald Trump’s various selections for cabinet positions. Perhaps, of them all, the one pick that has garnered the most profuse and stringent criticism has been Trump’s choice for United States Secretary of Education—Betsy DeVos.

Whether one believes the Michigan philanthropist and school-choice advocate to be a satisfactory and competent individual for this influential office is largely contingent on one’s views regarding DeVos’ educational and political principles on such key issues as parental rights, charter schools, private schools, and the extent of federal prerogative in education.

However, even from a bi-partisan standpoint, there is one attribute she possesses that qualifies her to the post and which all previous Secretaries have lacked. It is her deficiency of professional experience in education. That’s right. She has no training in education or teaching, nor has she filled any official capacity in a public school system, as a teacher or administrator. All previous Secretaries of Education have held some form of experience in these areas, yet she has none and is more qualified for the position because of it.

This may seem a strange statement. Certainly, what is needed in a United States education secretary is someone who has a degree in education, spent innumerable hours teaching in the classroom, and can spout Dewey and modern educational lingo and statistics as easily as a first grader reciting the alphabet. Right?

Over the past two centuries, our civilization has increasingly come under the dominion of the expert and the trained professional. When it comes to questions as diverse as gardening, childrearing, politics, or education, our culture automatically turns to the individual with longest list of abbreviations after his or her name.

This would be solidly good and right if the trained and professional gardeners, child care workers, politicians, and teachers really were the most knowledgeable and competent farmers, parents, statesmen, and educators. However, this often is not the case.

In his 1909 essay “The Twelve Men,” the great English essayist, playwright, journalist, novelist, and poet G.K. Chesterton explained why this is in the following words:

“That the more a man looks at a thing, the less he can see it, and the more a man learns a thing the less he knows it. The Fabian argument of the expert, that the man who is trained should be the man who is trusted, would be absolutely unanswerable if it were really true that a man who studied a thing and practiced it every day went on seeing more and more of its significance. But he does not. He goes on seeing less and less of its significance. In the same way, alas! we all go on every day, unless we are continually goading ourselves into gratitude and humility, seeing less and less of the significance of the sky or the stones.”

This is the trap of the professional educators. By enveloping themselves in all the current educational statistics, studies, and techniques, they can easily forget what education is and what it was meant to be. By seeing, they cease to see and lose sight of education’s wood among its trees.

The American education system—bureaucratic, massive, and complex—could benefit from fresh eyes, which will have a greater likelihood of perceiving a truth that many experts have missed.

School boards were established to empower ordinary, passionate leaders who understand their local school systems. It might take someone not trained as an educational expert to recognize these local leaders are our greatest asset, not the experts themselves.

Daniel Hubin has edited the Hubin Anthology of Christian Literature and is pursuing studies at Welch College. He resides in Franklin, Tennessee.