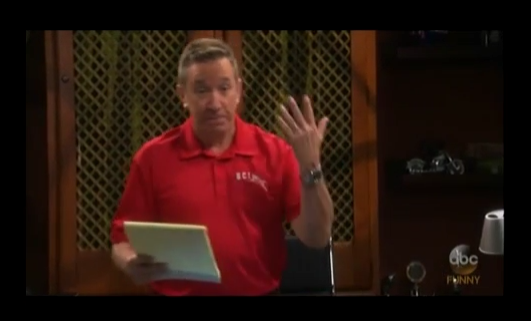 Tim Allen has become one of TV’s biggest stars by embracing his Everyman qualities.

The former Home Improvement actor is now in his sixth season on ABC’s Last Man Standing, a show that could have been a spinoff of his Tim “the Tool Man” character.

Like Tim Taylor, Mike Baxter is a “man’s man”: plain-speaking, masculine, and “ruggedly” individualistic. He’s not necessarily smart, but his common sense has a knack for getting at the truth of things.

Though much of the humor in both comedies is directed at the hyper-masculine protagonist, plenty is saved for the absurdity of the world in which this simple guy finds himself operating.

In a recent episode, the writers of Last Man Standing set their sights on the new fad of political correctness in higher education. It involves Mike trying to help his daughter Mandy cheat on an assignment for her ethics class (get it?), but Mike runs into problems with “microaggressions”. Here is an excerpt:

Mandy: No, uh, you can’t say “Ladies and gentlemen,” because it excludes those who don’t identify as either.

Mike: Hmm. But those are the only two choices.

Mandy: No, not anymore. You just have to keep it gender-neutral, okay? Please continue.

Mike: “Hey, everybody.” “America is the land of opportunity. I stand before you as –”

Mandy: Stop! Okay, by saying that America’s the land of opportunity, you are implying that everyone has the same opportunities.

Mike: I’m not implying it. I’m saying it. If you live here and you work hard, you can succeed. That’s how this works.

Mandy: Uh…yeah, that one’s on here, too. It hurts the feelings of those who work hard and don’t succeed.

It’s a pretty funny clip. The sad part is that there are students paying $3,000 a credit for this stuff.