It’s easy to battle racists and racism when they’re wearing their ideas on a t-shirt or an armband.

When somebody says something like “The Mexicans are taking our jobs” or “The blacks are lazy” or “The Jews are running the world!”, you know exactly what you’re getting with that person. When people run around wearing white hoods and have swastika tattoos on their foreheads, it’s pretty clear what they’re all about.

You see a person like that and almost instinctively understand that they have reduced a lot of the way they see the world and the way they interact with others to the most superficial of characteristics.

Maybe you feel sorry for them. Maybe you’re angered by them. Either way, you know that if they vote or try to create legislation, they’re going to do so in a way that is based on collective identity and trying to make sure their “group” succeeds and the other is kept out.

Some of these guys are pretty easy to spot.

We’ve all made fun of them, and our culture mostly dismisses them as idiots and the butts of our jokes. Southern rednecks and good ol’ boys who miss segregation, Texan militia bros on border patrol, fat union slobs in Michigan who are always complaining about “The Chinese” taking all the factory jobs and the un-American corporations that move jobs overseas. And now we even have racist “Alt-Righters” and a handful of neo-Nazis coming back into the spotlight.

Mostly, they’re pretty obvious simply as a matter of aesthetics.

They talk differently and express ideas that most of us would be uncomfortable expressing in public. They see people not as unique human beings who have their own skills and identity, their own moral character and work ethic, or their own ideas; but instead as part of some collective group. And for some reason, that collective group is always bad unless it’s their own.

There’s no universal agreement among collectivists on exactly which race or gender is the problem, but the one thing that brings them all together is the rejection of individualism.

That (not being “offensive” or “anti-establishment” or a Confederate war reenactor or anything else) is the unifying flaw in their thinking that bridges all cultural, social, and economic differences. Racists can come from any class and any part of the world. The one thing they all have in common is their rejection of people as individuals. That is their underlying mistake.

Collectivism is the root of just about every terrible idea, and has provided people with reasons to close their borders, go to war, and harm their neighbors for as long as anyone can remember.

But ask yourself: Who else in our society consistently makes this mistake?

Who else consistently reduces individuals to their group identity based on race, gender, sexual-orientation, or economic status? Who in our society are obsessed with identity politics?

It is not just the rednecks and Nazis.

To the contrary, some of the most egregious collectivists in our society are the people sometimes called “Social Justice Warriors” who see themselves as the opposite of right-wing collectivists. SJWs are people who claim to oppose to racism and sexism, yet for them everything must be understood only through the lens of collective identity.

Who people are as individuals is irrelevant. Whether or not they have worth as a person depends largely on whether or not they’re seen as part of one group or another. Empathy and sympathy are only extended to those who are seen as more oppressed based on a superficial assessment of their skin color or gender.

It is a truly dehumanizing way of looking at other people. 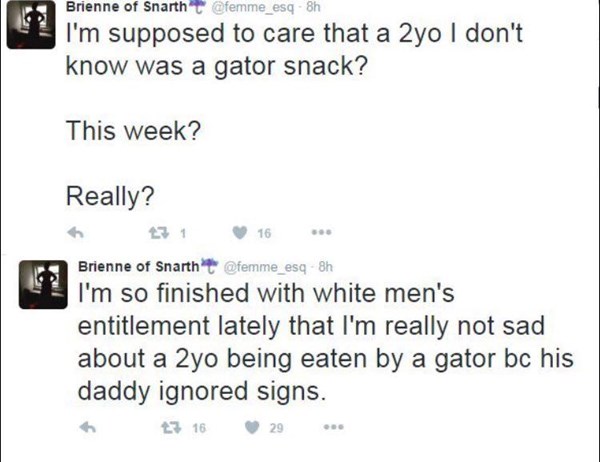 What’s important to understand is that these people are making exactly the same error that other racists have been making for generations.

Instead of treating people as equally morally worthy in the abstract and more or less valuable based on their individual character and contributions to society, they see people as interchangeable members of collective groups and adjust their outrage and expectations accordingly.

The only real difference is that this type of collectivism has its roots in Marxist class-theory and can often be found in academia, dressed up as compassionate and well-meaning.

In the service of their supposed good intentions, these other collectivists offer explanations of the world in terms of shared experiences based on race or gender, and in terms of an overriding narrative of “privilege” wherein all people of some race or gender all share some unique place on the sliding scale of oppression.

Meanwhile, they explain away their collectivism as somehow different from other forms of racism and sexism by simply redefining those terms to be an issue of power dynamics instead of an issue of seeing people first and foremost as representatives of their “group” and not as unique people with values and experiences of their own. 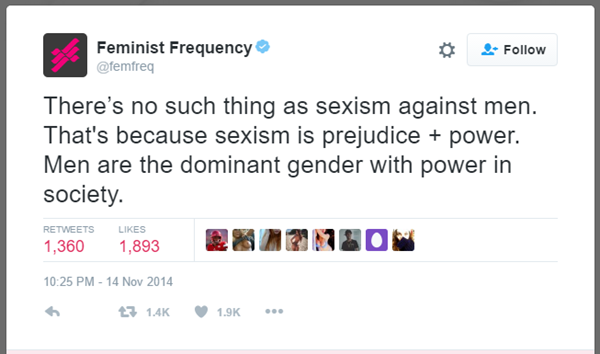 But make no mistake, this kind of thinking is every bit as racist as anything you might hear on the set of Duck Dynasty, and in many ways it’s actually far more insidious.

When you take a closer look, sometimes it’s actually hard to tell them apart. Anita Sarkeesian — a well-known feminist blogger and owner of the @femfreq Twitter account, for example, has even advocated the benefits of racial and gendered segregation. 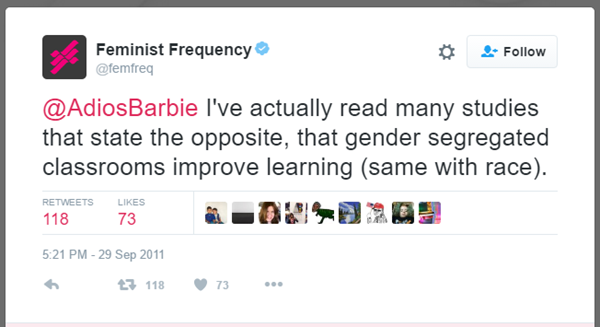 Over the past few weeks, we’ve heard a lot of scary stories about the Alt-Right and the re-emergence of awful racists from the shadows of society. And it’s definitely a scary sight . But now would be a great time to remember that racism isn’t only ugly when it wears a pointy hat and sounds like a hillbilly.

It’s also ugly when it wears makeup and librarian glasses and has a college education.

When you think of bigotry as an aesthetic, it’s easy to think that it only exists among a certain type of person. But of course, this is just another stereotype. Bigots can come from rural Alabama, but they can also come from Brooklyn. The key is understanding that the true core of all forms of bigotry is collectivism.

If we want a kinder world, more cooperation with our neighbors, and less political polarization we need to abandon identity politics in all of its forms and start treating individuals with dignity and respect.

Sean Malone is the Director of Media at FEE. This article was originally published on FEE.org. Read the original article.