Shakespeare the Scapegoat: Sacrificing the Bard on an Altar of Ignorance 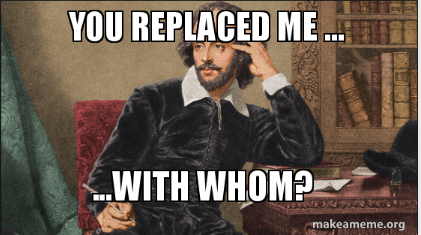 In the aftermath of Trump’s shocking victory, the English Department at the Ivy League University of Pennsylvania called a meeting of its students to discuss the election. This might seem a little odd in itself. What, one wonders, has the election to do with the studying of literature at college?

One might see how the Politics Department would call such a meeting, but why on earth would the English Department do so? On what grounds? Perhaps the faculty wanted to encourage its students to discuss the figurative use of language in the campaign, or perhaps the use of metaphor by the candidates? Not exactly. They merely wanted to vent their reactionary spleen against the “racism”, “homophobia”, “sexism”, “fascism” and “Nazism” of the millions of Americans who failed to vote as they did. In other words, the meeting had nothing to do with literary correctness (which no longer exists in their postmodern world) but with political “correctness” which must be enforced at all costs.

In any event, the outcome of the meeting was that the students and faculty of the English Department decided to victimize Shakespeare for his part in Donald Trump’s election victory. Deeming the Bard of Avon to be too white, a birth defect for which he is apparently to blame, and too straight for their liking, a decision was taken to remove a hallway portrait of William Shakespeare and replace it with a photograph of black lesbian activist Audre Lorde. One imagines Donald Trump quaking in his boots at this earth-shattering development.

“We invite everyone to join us in the task of critical thinking about the changing nature of authorship, the history of language, and the political life of symbols,” Penn English professor and Department Chair Jed Esty wrote in a statement endorsing the censorship of Shakespeare.

Unraveling the jargon, this iconoclast advocates the removal of great works of literature which do not reflect his own ideological prejudices, replacing them with works of questionable literary merit which toe the totalitarian party line which he advocates. In short and in sum, it is better for students to read political propaganda, expressive of an unhealthy and hate-filled obsession with race and sexuality, than it is for them to read Shakespeare, or Homer, or Virgil, or Dante, or Jane Austen, or Dickens, or Dostoyevsky, et cetera.

Thus Penn English major Katherine Kvellestad told the student newspaper that “the change reflects the values of the department and its students.” In other words, students no longer go to college to learn the values of others, including those others whose genius commands respect, but to demand that their own values are imposed on others. Thus a 20-year-old uneducated undergraduate sits in judgment on Shakespeare, condemning him for being born white (a crime), being born further in the past than the student (a crime), for marrying someone of the opposite sex (if not a crime, then at least a faux pas) and failing to endorse the political platform of the latest faddish ideas (a heresy).

As for the black lesbian activist whose iconic image has replaced the hateful Bard, she claims to be a poet. Her poetry, which is obsessed with race, does not judge society on its merits but on the color of its skin. Thus Ms. Lorde writes of “the whiteness of the desert where I am lost” and of “trying to make power out of hatred and destruction”.

She is indeed lost, as are those faculty members and students who join her in judging everything in terms of race. As for “trying to make power out of hatred and destruction” one thinks perhaps of Achilles. The problem is that students at the University of Pennsylvania do not think about Achilles, the consequence of which is that they are doomed to fall as he fell and fail as he failed.

These poor malnourished students, living on a diet of poisoned ivy, will fail in life as surely as they will pass their exams. Failing to learn the lessons of great literature because their professors fail to teach them, they are doomed to the Pride which always precedes the inevitable fall.