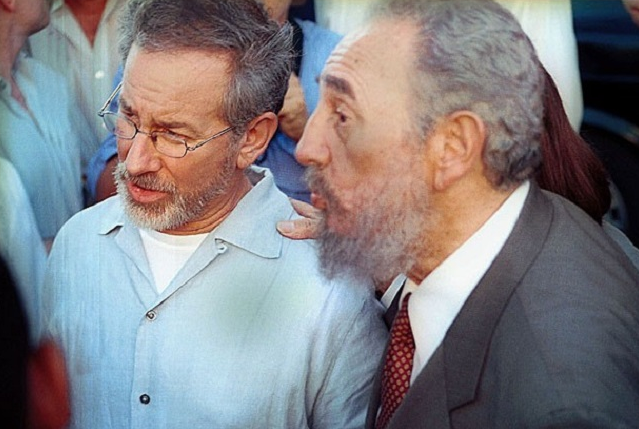 Hollywood romanticizes revolutionaries, seeing them as noble, rugged individuals with towering passion and idealism who fight and risk their lives to make the world a better place. Sometimes that view is deserved. But more often than not, given Hollywood’s left-leaning partisanship, it elevates brutal dictators to the status of misunderstood heroes. Thus it’s no surprise that Fidel Castro, recently deceased political leader of Cuba from 1959-2008, has for years been portrayed by Hollywood as a hero despite the crimes committed by his repressive regime. His passing has resurrected his story, and while the so-called Hollywood Elite might continue to talk about him as a charming and earnest world leader, the facts of his brutal dictatorship are impossible to deny.

It was in the late 1950’s that Fidel, along with his brother Raul and the revolutionary Che Guevara, fought a guerrilla war against Fulgencio Batista, then-ruler of Cuba. Despite having much smaller forces, Fidel was a master of propaganda and was able to oust Batista: on January 1, 1959, Castro and his force of 800 guerrilla fighters defeated a Cuban army of 30,000 men. But revolutionary fervor quickly turned to power-wielding, and Castro’s true colors were revealed. He nationalized all private commerce and industry, kicked out all foreign investment, and rounded up and jailed dissidents. By 1961, Cuba was firmly established as a partner nation with the Soviet Union, and the United States had severed all diplomatic relations with the small nation only ninety miles away from Florida.

Four months later, President John F. Kennedy tried to overthrow Castro in the catastrophic Bay of Pigs invasion, a historical moment captured in the film The Good Shepherd. In the movie, the failure of the operation is blamed on a CIA leak, which the agency denies. A year later, during the Cuban Missile Crisis, the US went head-to-head with Cuba again over Russian nuclear weapons hidden throughout the island. This story was retold in the powerful film Thirteen Days, though it, too, did so inaccurately.

Truth is, Castro’s Cuba was an absolute dictatorship, a one-party government where political dissent and opposition were ruthlessly suppressed. In 1993, Castro’s own daughter Alina Revuelta sought asylum in the United States, denouncing her father as “a tyrant” and describing Cuban Communism as “a dead-end street.”

You would know none of this from the way Castro and Cuba have been portrayed in Hollywood movies and lavishly praised by celebrities, however. Conspiracy theory lover Oliver Stone produced not one, not two, but three documentaries about Fidel, most notably Comandante, which HBO opted not to broadcast even after paying for much of its production costs. Did Stone portray Castro objectively? Of course not. As Stone explains: “My role here was not as a journalist. It really was as a director and filmmaker. In my job, I challenge actors. I provoke them.” He later said that he felt Castro was “one of the world’s wisest men.”

Actor and activist Sean Penn, director Steven Spielberg, actor Michael Douglas, and plenty of other Hollywood celebrities have visited the island nation of Cuba and managed to completely overlook the fact that it has been a repressive dictatorship for half a century. Jack Nicholson had the audacity to praise Castro as a political savant; he told Variety that “Castro is a genius. We spoke about everything.” He added, “I think Castro never wanted to break [diplomatic relations] off with us”.

Actor Chevy Chase actually said at an Earth Day event years ago that “sometimes socialism works . . . Cuba might prove that.” But it’s singer and actor Harry Belafonte who had the most ringing (and outrageous) endorsement of Castro: “If you believe in freedom, if you believe in justice, if you believe in democracy, you have no choice but to support Fidel Castro!” Tell that to the thousands of Cuban people who suffered under his regime, which was tantamount to apolice state. And tell that to the millions of Cubans who risked death to flee their country and find freedom in the United States.

Hollywood loves over-the-top revolutionary figures and happy endings, but in the case of Fidel Castro, it has taken hero-worship too far. The story of Cuba isn’t one of sunny socialism; it’s a tale of brutal repression and economic degradation. Here’s hoping Castro’s death creates an opportunity for Cuba to write a new chapter in its history—and for Hollywood to finally stop romanticizing dictators.