About Those Apparitions Who Shook Down Scrooge for Money 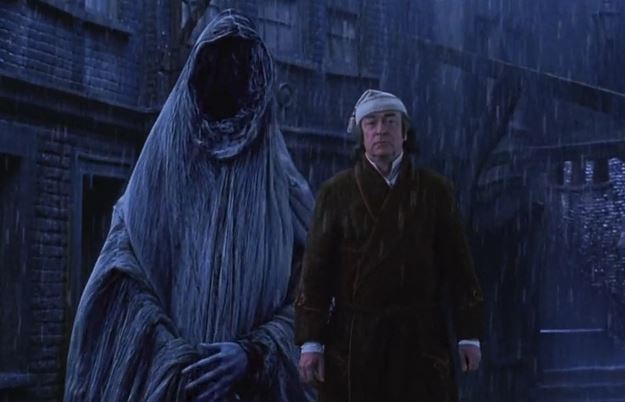 No Christmas season would be complete without plentiful opportunities to watch stage or television productions of Charles Dickens’ unfortunately immortal A Christmas Carol. The classic Reginald Owen and Alastair Sim movies will no doubt play several times on multiple cable channels. We have a live production showing at the Alleyway Theatre here in Buffalo, N.Y. Or, you could always go full-on retro and actually read the book.

I’m going to pass altogether this year on poor Scrooge’s story and hope for a sequel, even though Dickens is no longer with us. It just doesn’t get me into the Christmas spirit to watch a story with such a dark and foreboding ending. Christmas is supposed to celebrate the birth of new hope.

As Butler Shaffer demonstrated in his brilliant defense of poor Ebenezer, Scrooge was an invaluable benefactor to English society before the events of Dickens’ story. We are not given details of his business dealings other than they had something to do with finance. That Scrooge had been in business so many years and had amassed such wealth is enough for us to conclude he had made many more wise decisions on where to direct capital than unwise ones.

Who knows what housing, stores, railways or other benefits to society Scrooge had made possible through his wise judgment? How many thousands of jobs had he created? Dickens is unjustly silent on this. Whatever Scrooge had financed, we know it was something the public wanted or needed enough to pay for voluntarily. Thanks to Scrooge, however crusty his demeanor, the common people of London were far richer than they otherwise would have been without his services.

His only weakness seems to be sentimentality towards the whiny, presumably mediocre-at-best Bob Cratchett. We know Scrooge was paying Cratchett more than anyone else was willing to or Cratchett would surely have accepted a higher-paying job to put additional funds towards curing Tiny Tim. But we really don’t have any evidence anyone else was willing to employ Cratchett at all, at any salary level. Still, we must defer to Scrooge’s judgment on this and perhaps even laud him for finding a way to employ a substandard employee without jeopardizing the firm as a whole.

Thus, all was as well as it could have been on December 23. Scrooge’s customers were happy, Bob Cratchett was at least employed, thanks to Scrooge, and Scrooge himself was as happy as he could be, considering the ingratitude with which his genius had been rewarded and all the panhandlers constantly shaking him down.

Everything changed on Christmas Eve, when Scrooge was terrorized – there really is no other word for it – by three time-traveling, left-wing apparitions. It wasn’t enough to frighten an elderly man with the mere appearance of ghosts. They took him on a trip through time, scolding him for supposed mistakes made in the past and blaming him for the misfortunes of others in the present and future. And let’s not forget the purpose of this psychological waterboarding. They are not, as Shaffer observes, pursuing Scrooge’s happiness, but his money. They are William Graham Sumner’s A & B conspiring to force C to relieve the suffering of X. Politicians A & B use the polite coercion of legislation; the spirits make use of more direct and honest threats of violence.

Their plot was successful. Scrooge awoke from his night of terror obviously out of his senses and began making one poor financial decision after another. Perhaps buying the largest turkey in the local shop could be excused on Christmas Day. But then, without any evidence of improvement in performance, he raised Bob Cratchett’s salary and promised to take on the Cratchett family’s medical expenses.

After that, we are told Scrooge was “transformed” completely, which we can only interpret to mean he no longer made the kind of decisions that had previously benefited so many. We are told Scrooge’s subsequent behavior was so foolhardy that some people laughed at him. But even this wasn’t enough to snap him out of the permanent delirium with which the spirits had inflicted him.

The story ends on that foreboding note. We are told Scrooge never again returned to the prudent decision-making that had brought on the supernatural terror attack on Christmas Eve. We have to assume the “transformed” Scrooge eventually went out of business, perhaps solely due to overpaying Cratchett, who is 50% of his labor force, perhaps due to the cumulative effect of the many unwise decisions we are told continued afterwards.

Not only was Tiny Tim’s medical care cut off, but the whole Cratchett family was rendered destitute and starving. As Scrooge had already been paying Cratchett more than anyone else was willing to, even before the imprudent raise, we have to assume Cratchett made less after Scrooge went out of business than he did at the beginning of the story, if he convinced anyone to employ him at all.

Worse even than the misfortune that befell Scrooge, Cratchett and Tiny Tim was the misfortune visited upon society as a whole. How many profitable ventures were never financed, both before and after Scrooge went out of business from investing with his heart instead of his head? How many future jobs were destroyed and children of unemployed fathers left sick and hungry?

Certainly, this horror story would be better told on Halloween than Christmas. Christmas is a hopeful holiday, celebrating the birth of the savior of the world, whose parable of the three servants lauds wise capital investment and condemns unwise use of capital. We can only hope some ambitious writer will pen a sequel to Dickens’ dark tale, in which Scrooge regains his senses, fires Bob Cratchett and returns to making the kind of decisions that once raised the living standards of so many.

Republished from Tom Mullen’s blog. This article was published on FEE.org. Read the original article.