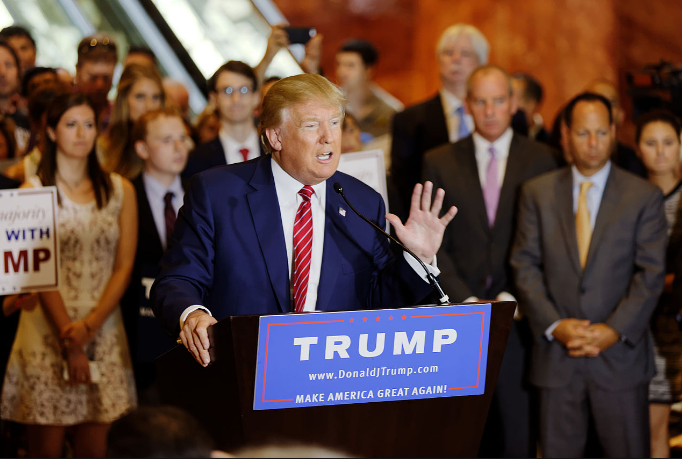 ‘Can you hear me now?’ should be the headline.

Establishment, inside, elite politicians and media have heard and are still stunned. They don’t quite know yet what to make of the results of Election 2016 in America because as of the moment this is being written, the results aren’t yet fully in. But from what we do know, they’re realizing that they didn’t see it coming. At all. And some of them fear these strange, almost foreign people in this country who went to the polls Tuesday. People they have dismissed for so long, they never took the time to listen to them and their concerns in this major election year, or longer.

This NYT opinion piece, published ahead of the long night of election returns, had a pretty good idea that something was happening that would require a reckoning.

Whatever the result of the United States election, politics has been “changed, changed utterly,” to use the words of the poet W.B. Yeats on Ireland after the 1916 Easter Rising. And not just in America. Across the Western world, there is a rising anger at “the system.”

That nails it. It’s spreading across the world, including the United States, but was hardly noticed and certainly not for what it was, given elite media coverage of the election cycle and the Trump v. Clinton race for the presidency. “The center is struggling to hold,” the Times op-ed piece continues. Why? Because the battles, political and cultural, have been between the left and right, sometime the further flung of the two. Bernie Sanders was left of Clinton, who is left of Obama. On Election Day in America, it turns out that many Sanders voters, feeling disenfranchised by establishment politics, voted for Trump, exit polling showed.

Establishment politicians, economists and policy makers know something is happening, but…they don’t know what it is…The source of much of the anger is the very social system that they have created these last 40 years – globalized, neoliberal and destructive of the social contract between governments and peoples on which the political center rests.

The piece keeps referring to “the angry”, which is a stronger way of saying ‘the fed up and determined’, or better yet, ‘the fully engaged’. We are, after all, a Representative Republic, and the time has come to stand up, speak out, and collectively activate to make a difference that’s been long promised by politicians but never delivered. Things have only grown worse for the left out and left behind, the jobless and over-regulated and over-taxed, the everyday American trying to serve and survive and meanwhile, earning less and being strapped with higher prices for fewer choices for healthcare, if they’re working at all. Paying more property taxes and sales taxes and other costs companies have had to add to pay for the over-regulation, themselves.

And all this time, the meritocracy has had a lot of disdain for the everyday people.

The striving middle class is pushed into the ranks of the poor as well-paying jobs, and the social mobility they bring, disappear, sometimes overseas, sometimes as a result of trade deals the establishment parties insisted were in the popular interest. Communities have been devastated, as the civic ecology on which a politics of the common good depends for most folk has been shattered: stable work on which to build a home and a family, pride in identity and place, and a network of supportive institutions and relationships cultivated across generations.

This U.S. election has been compared so much with the Brexit Referendum, British experts have been brought in for analysis on what’s happening in America. In recent months, I’ve commented on radio, along with guests, how similar the two are in the divisive atmosphere that grew around them, to the point where husbands and wives turned on each other for their fervent political differences, neighbor against neighbor, and friendships even ended over these splits in political views, so deeply have they run.

It’s been a year of global judgment on such people, too, which caused further resentment, cast in a string of pejoratives, and lumped together in a “basket of deplorables” by candidate Hillary Clinton at one point, which struck deeply into the base of Donald Trump supporters.

U.S. media and reporters, writers, bloggers and commentators here and abroad have spent months talking about Trump with a disclaimer that to say anything even remotely open about him didn’t mean they actually accepted this bombastic, repulsive, disgusting creature, but ‘hey, let’s give him a break because he’s come so far for a reason, and maybe has something to say’. Everything was thrown at the man, including the ‘creepy, crawly’ imagery of the atmosphere and mindset in which he dwelt. But it was he who said he wants to drain the swamp that was so much of the inside establishment of government and enablers in media.

So some voters who wanted a pro-life, pro-family, religious freedom defender who at least promised good laws and good Supreme Court Justices, who may not have even voted for Donald Trump or Hillary Clinton but hoped somehow, better government would prevail, went into election night waiting with dramatic tension to see what the pundits never could predict.

And they all got it wrong, in that even as Tuesday turned into Wednesday, Donald Trump was actually close to the threshold of securing the electoral votes to become the next U.S. President. Against that prevailing wisdom that was just demolished.

As I write this, the deal just got sealed. Mr. Trump was just declared to have won the presidency. This is historic. Now, a lot of healing has got to follow.

Fuller election coverage will follow as it comes out in the next day or so. But for now, I think of a few different things. One, I saw remarkably few (maybe historically few) yard signs or bumper stickers for any candidate, and if there was one here or there, it was for a local county or state office. Not the presidential race. That is unprecedented in my lifetime.

Another is the recall I had on Election Day of President Gerald Ford’s first line of his hastily arranged inauguration address, succeeding Richard Nixon, saying “My Fellow Americans, our long national nightmare is over.” As I approached my polling place, I wondered if that would be true on this day. But then wondered, what would be over, and what would be about to begin?

We’ll soon find out, but it is a pivotal moment in our history. And just as the people have spoken in the only poll that mattered, the people will need to work together to heal a wounded, divided nation. That is up to each and every one of us.

This MercatorNet article was republished through Creative Commons licensing.