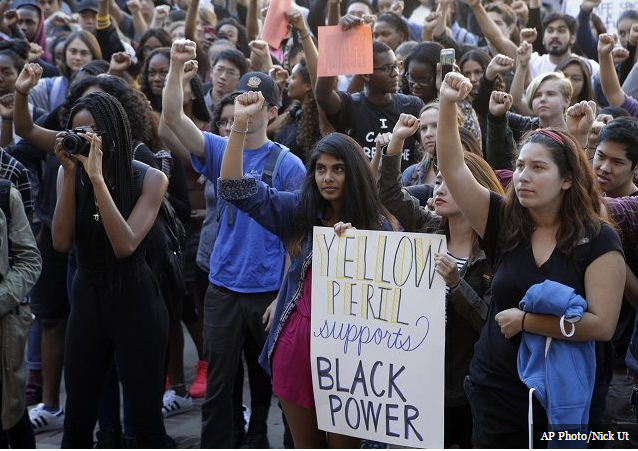 “I am writing because of concerns for our community arising out of yesterday’s national election.  Certainly, not in my lifetime has there been a choice that is embraced by so many while also causing feelings of apprehension and vulnerability among so many others, including many students, faculty, and staff across our diverse University community.

There are three primary challenges for the country and, more importantly for purposes of this letter, for our community.  The first is that those in distress have the right opportunities to raise and discuss whatever anxieties they are feeling now.  I will be personally engaged in this dialogue, and I strongly urge you to seek out the discussions and meetings being planned throughout the University by all schools and departments.  The second is that we not let different viewpoints about this election, strong as the feelings on every side might be, descend into intolerance or intimidation.  This requires strong intellectual character on all our parts.  And the third point is that we all have to make sure that we are able to continue on with the work of scholarship and teaching, which is not only our central mission but ultimately the best answer to overcoming divisions and even the risk, feared by many, that our principles may be violated.

In these moments, we must turn to our fundamental values, among them a commitment to freedom of thought and expression, dedication to tolerance and reason, respect for diversity and differing points of view, and a determination to do what we do with the utmost integrity and courage.”

Via the Columbia Spectator:

“Over 200 Columbia students gathered early Wednesday morning at the heart of campus, reeling from Republican nominee Donald Trump’s presidential victory with a mixture of shock, disgust, and sadness.

The elite university reportedly has created a “safe space” for grieving students, and reports indicate that professors have suggested postponing midterms to allow students time to cope.

“Students looked a bit shaken, not really focused on what we were doing in class,” said Political science professor Justin Phillips. “You can tell when someone’s upset.”

My hunch is that these are not the “fundamental values” Bollinger had in mind, but I could be wrong. He is certainly not a Trump fan. In February, Bollinger, who received a $3.4 million compensation package in 2013, said it would be “a real pity” if Donald Trump was somehow elected.

In any event, the reaction of Columbia’s student body doesn’t seem that far out of line with that of students around the country. Thousands have filled streets in protest, ABC reports, with violence popping up at some rallies.

This isn’t exactly surprising. Protesting seems to be the one thing college students today are really good at. The activities are basically what we’ve come to expect from the intolerant student left. But keep in mind: all of the protesting we’ve witnessed in recent years occurred under a progressive administration.

What will college campuses look like under a Donald Trump administration? Has the age of perpetual protest arrived?