Even the Left is Getting Tired of PC Thanksgivings 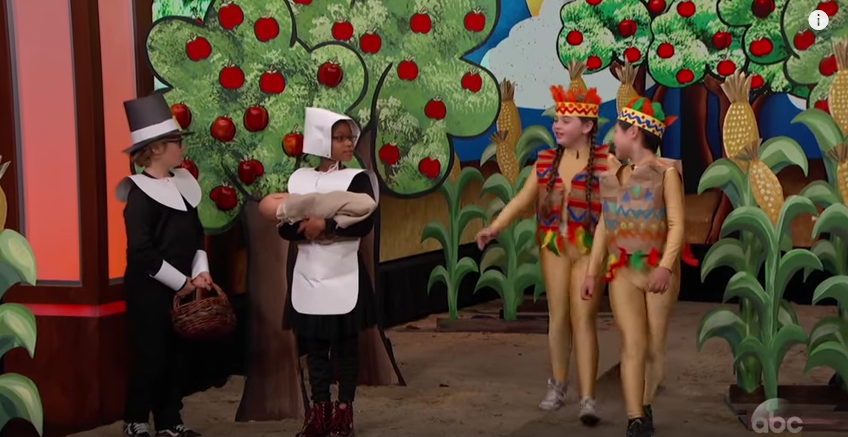 You know that political correctness has gone too far when those who are its biggest proponents are mocking it.

That was the case the other night on Jimmy Kimmel’s show. In honor of the upcoming holiday, Kimmel featured the kid-acted, first Thanksgiving skit which has long been a staple in many elementary schools. And while Kimmel’s skit featured the traditional feathered headdresses and Pilgrim bonnets, the script was completely modern and PC appropriate.

For starters, there were the shout-outs to indigenous and non-indigenous people. The Pilgrim baby was not a “squaw” nor a “brave,” but an “it” whose gender would be determined when the child chose. One Pilgrim had a maize allergy and the sight of the turkey only further offended him.

Fortunately, these food problems were solved by the arrival of a “Tofurkey,” the taste of which no one ended up liking. The play ended with the Tofurkey being self-deprecating and proclaiming:

“You see, when we all come together and compromise and spend all of our time trying to please everyone, we end up with a lumpy glob of brown goo.”

Hollywood and its entertainers like Jimmy Kimmel have long been on the cutting edge of promoting political correctness and non-exclusionary tactics. But do stunts like this show that even they are beginning to grow tired of compromising in order to avoid stepping on any toes?

Is it possible that the pendulum could swing back in place and allow us all to get back to a plain, common sense Thanksgiving, uncorrupted by any PC-nonsense?