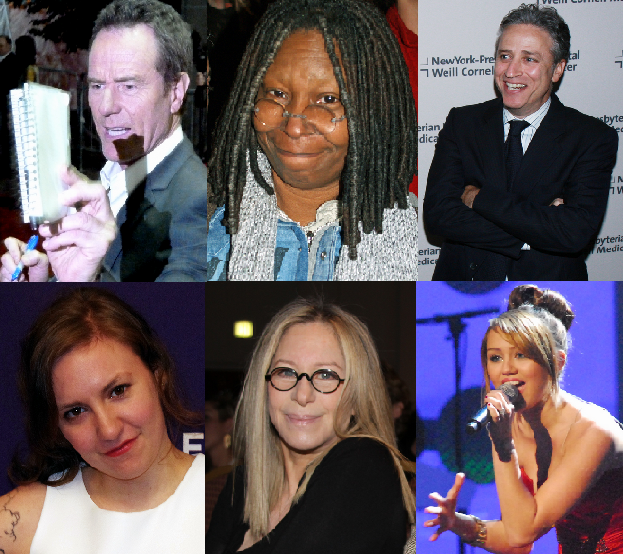 Not for the first time, many distinguished actors, performers, and otherwise notable figures promised they would do the unthinkable if the wrong candidate got elected: they’d remove themselves from America and move to Mexico.

Check that, I guess it’s Canada.

Anyway, it’s an unusual threat if for no other reason than it’s palpably narcissistic. The implication, of course, is that if Americans are not careful, they’ll lose the inestimable talents of these celebrities, some of whom actually have talent.

But one will still be able to watch Breaking Bad reruns if Bryan Cranston moves to Toronto, no? Which makes me think: perhaps these are mere empty threats, the grumblings of unserious people who have no intention of actually moving but find comfort and validation in expressing their disgust about a candidate who doesn’t hold the proper progressive values.

Whatever the case, Americans must somberly accept the possibility that the following people are leaving are physically capable of following through on their most likely empty threats to leave the country if Donald Trump was elected presidential.

“My act will change because I will need to learn to speak Spanish,” Schumer said on the BBC’s Newsnight. “Because I will move to Spain or somewhere. It’s beyond my comprehension if Trump won. It’s just too crazy.”

The actress said there is a “100 percent chance” she’d move to Canada (again, why is it always Canada?) if Trump is victorious on Election Day.

Babs was also unoriginal in her point of destination. “I can’t believe it. I’m either coming to your country if you’ll let me in, or Canada,” the actor and singer told 60 Minutes in a recent interview.

Streisand and Dunham might be hurt to learn that Canadians don’t want them; so please don’t tell them.

#ElectionNight This is Canada building an igloo wall between the US, just in case. I’ll bet you regret all of those jokes now, eh? 😉 pic.twitter.com/UX5XxuTowr

BREAKING : #Canada reportedly building a wall along its southern border to prevent impending mass exodus from the South.#USElection2016 pic.twitter.com/2o3FmJtFj7

“I would definitely move. It’s not real to me that that would happen. I hope to God it won’t,” Cranston said.

The “Wrecking Ball” singer said she’d “move out da country” if Trump, whom she called a “f*cking nightmare,” wins.

The former Daily Show host told People magazine last year that if The Donald won he’d consider “getting in a rocket and going to another planet, because clearly this planet’s gone bonkers.”

Cher tweeted that she would be moving to Jupiter if Trump wins. She at least gets originality points for not saying Canada.

The comedian suggested that unlike other celebrities, her threat to leave the USA if Trump got elected was no idle threat: “I did buy a house in another country just in case,” Handler said in an ABC interview shortly after Trump locked up the GOP nomination “So all these people that threaten to leave the country and then don’t — I actually will leave that country.”

The guy that took on Darth Vader and survived Pulp Fiction apparently could not handle the prospect of a Trump victory. “If that motherf*cker becomes president, I’m moving my black ass to South Africa,” he told Jimmy Kimmel.

Goldberg, too, implied she might pick up stakes and give up on the old US of A if Trump managed to find his way to the Oval Office.

“Maybe it’s time for me to move, you know. I can afford to go,” Goldberg said on The View in January, while speculating on the possibility of a Trump presidency.

Neve Campbell, Barry Diller, Keegan-Michael Key, George Lopez, and Rev. Al Sharpton also said they would move if Trump got elected. We couldn’t agree if they counted as celebrities or not. (I argued with great passion that George Lopez of Ski Patrol fame should have been on the primary list, but I was out voted. Rigged.) So we created a second tier for them.