Is it Time to Stop Running Our Schools Like Factories? 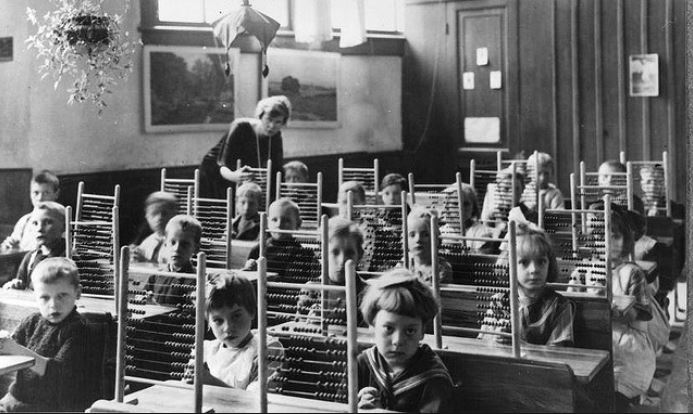 The political discourse over education in the United States consists mainly over arguing about funding and how best to “prepare students for the workforce.” These are certainly important matters to discuss, but what if our national conversation about education is too limited? What if the scope of our discussion on education were wider than merely how to fund it and how it can best feed labor? More specifically, what if we also discussed the model and the emphasis of our education system, rather than just the cost and the pragmatic ends?

Since the 19th century, the United States has adopted what is known as the “Prussian model” of teaching (also known as the “factory model”). We would recognize the manifestation of this model fairly easily: a teacher at the front of the room, and neat rows of desks with students sitting in front of him/her. The purpose of this structure is fairly simple: the teacher is giving students information in “assembly-line fashion,” and the students— through memorization, repetition, and eventually testing— hopefully retain it. The reason education was modeled this way so long ago was to prepare students for factory work. The Industrial era needed a steady stream of bodies to ensure that production did not wane and the economy did not suffer.

The only thing, it seems, that hasn’t changed is our way of educating. This is a problem. Research has shown a possible link between the Prussian model and student “burn out,” as well as student disinterest in academic subjects. (Editor’s note: Some contend the view that the U.S. system is built on the factory model. For alternative views, read this article or this article.)

So what if instead of a model that encourages uniformity over creativity, groupthink over individuality, and repetition and testing over cultivating genuine interest in a subject, we replaced that model with one that decentralized and democratized the classroom? What if the relationship between educators and those being educated was less teacher/pupil and more mentor/mentee? What if our education was more about discussion and debate, rather than “send and receive”? I submit that a more democratic (and Socratic) model of teaching our nation’s young people is needed.

But this is, of course, only half of the equation. Without the right emphasis in our education system, the model is useless no matter which model it is.

Currently our emphasis on education, as I briefly mentioned before, is preparation for the workforce. Because of this, our primary focus is on testing rather than students truly learning. But what if we emphasized the cultivation of moral values within students, before we concerned ourselves with their future career decisions or the bubbles they inked-in on an assessment?

It was Teddy Roosevelt who once said, “To educate a man in mind and not in morals is to educate a menace to society.” Indeed, one could look only at the 2008 financial crisis and the menaces responsible, and see that perhaps if our ethical fiber had been stronger we could have averted the situation entirely. So what if we took the approach that each person has a “primary virtue” (i.e. some are stronger in courage, while some are stronger in kindness, and others are stronger in honesty, etc.), and our education system was geared around finding what each individual student’s virtue was, and cultivating that virtue until they reached adulthood? Perhaps that would lead to a far better world far sooner than if we kept the current course.

Race Hochdorf is a writer and private military contractor. You can find him at www.racehochdorf.com