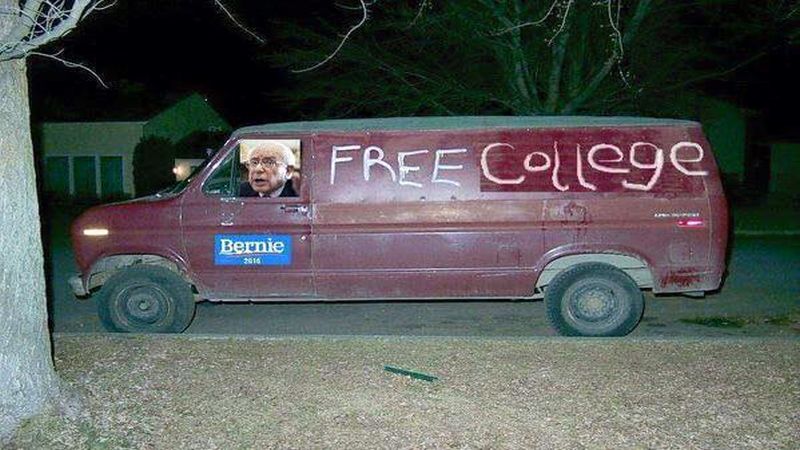 How often are we told by our friends on the left that America ought to follow the lead of Europe, specifically western Europe, and make college “free”? Pretty often, by my reckoning.

In the waning years of my community college teaching days a student raised that very matter on the first day of class. Obviously, it was much too early in our teacher-student relationship for me to know anything about his politics—or for him to know anything about mine. (Actually, mine were kept as much to myself as possible from the first day of class to the last.) But he soon proved himself to be very much on the left. As time went by, he also demonstrated that he was a very solid student, a polite and engaging young man, and a valuable member of the class.

So just what was his question?

First a bit of context. I was spending a few minutes of the opening class day congratulating my students on choosing a community college for their general education course work. College has become all too expensive, and they had selected the least expensive route to their degree.

Now, a community college lacks a residential setting. In all likelihood it also means delaying that escape from mom and dad. Classes do tend to be larger than in private four year colleges. And four years in one place can better cement lifelong friendships. But four year residential private colleges are anything but cheap!

Then there are the large public universities where introductory survey classes are essentially turned over to teaching assistants. At a community college we may be “teachers” (not “professors”), but we give the lectures, run the discussion groups, and grade the exams and papers. All in all, it’s a better deal at half the price.

At this point there was no need for any sort of sales pitch on my part. The students before me had already paid their tuition and found their way to class. But it was invariably my experience that too many community college students were at least somewhat embarrassed to be attending a community college. This was my way of letting them know that there was no need for any of that.

So… what was THE question? Here it is: Why doesn’t the United States do what Europe does when it comes to students and college? Why isn’t a college education free? Ah, the Bernie Sanders approach before anyone has ever heard of the man, much less felt the Bern.

For one of the few times in my teaching life I thought of the right answer right then, as opposed to a week later. OK, I replied, let’s do things the way Europe does them. For starters, that would mean that community colleges wouldn’t exist. It would also mean that by the age of about fourteen one’s educational future would have been plotted out. Test scores would determine your placement. You would be tracked for vocational training or more advanced learning, or some place in between. And that would be that.

Do western European countries pay for EVERYONE to go to college?  Hardly. Only the few are chosen—or selected—or culled. Choose your verb. We do things differently here. There are highly selective schools. There are mildly selective schools. And there are open-door schools. In addition, there is always the possibility of a second or third or fourth chance at a college education.

One of the best students I ever had was a fellow in his late twenties who, fresh out of high school, had flunked out of St. John’s University. He followed that up by washing out of my community college (Normandale in Bloomington, Minnesota). After spending nearly a decade as a fishing guide he decided that he’d like to become a physician’s assistant. So there he was, back where he had almost started, ready to “do school.” Between his time as a fine fishing guide and his ongoing career as a fine physician’s assistant he was finally a fine student. His story could not possibly be a European story.

But his is a very American story. Still, all of this is not to say that EVERYONE in America should at some time obtain a college degree. In truth, we have placed far too much hopes on a college degree as THE ticket to success in America. But that’s another topic for another day.

All that is being emphasized here is that doing education the European way is not necessarily the best way—and it’s certainly never been the American way. Our way is far from perfect. It can be inefficient, even downright sloppy. But it’s ultimately fairer. We want people to sort themselves out.

Of course, we could combine the worst of their system with the worst of ours. We could pay for everyone to go to college, no matter what. If you’re starting to “feel the Bern” on that one, stop and think before the singeing gets serious. Need more be said? I hope not.

John C. “Chuck” Chalberg was a long time veteran of the teaching trenches of the Minnesota community college system.