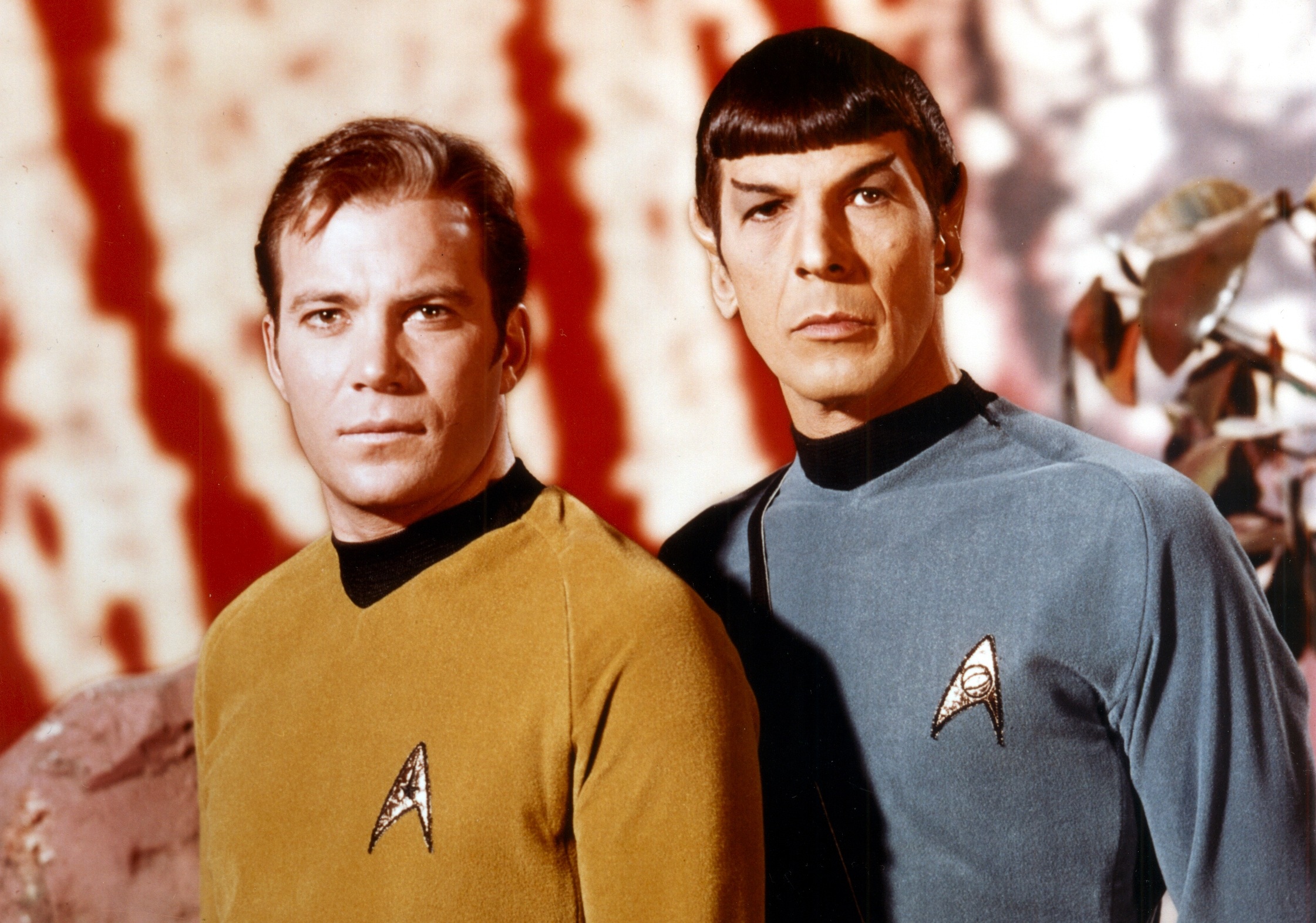 Fifty years ago – on Sept. 8, 1966 – TV viewers were transfixed by the appearance on screen of a green-hued, pointy-eared alien called Spock. But beneath the makeup, actor Leonard Nimoy fretted that this would be the end of his promising career.

“How can I play a character without emotion?” he asked his boss, Gene Roddenberry. “I’m going to be on one note throughout the entire series.”

Nimoy thought he looked silly wearing the prosthetics that turned him into a Vulcan, at one point issuing an ultimatum: “It’s me or the ears.”

Nimoy’s misgivings were just one of many problems the writers, producers and cast faced during “Star Trek”’s troubled journey to the screen. Culled from their recollections, this is the story of how “Star Trek”’s mission to explore strange new worlds was almost over before it began.

The ingredients of “Star Trek” had been slow-cooking in creator Gene Roddenberry’s brain for years. At first he wanted to write a show about a 19th-century blimp that journeyed from place to place, making contact with distant peoples.

Deciding instead to set the show in the future, Roddenberry drew upon his youthful immersion in science fiction magazines like Astounding Stories. Also important was his experience as a World War II bomber pilot, which caused him to ruminate on human nature: Would we ever outgrow our obsession with violence? And from C.S. Forester’s Horatio Hornblower novels, Roddenberry borrowed the idea of a courageous captain burdened by the duties of command.

With tiny Desilu Studios interested in making the show, Roddenberry pitched “Star Trek” to the networks. CBS passed after Roddenberry botched the pitch. But NBC bit and ordered a pilot episode, which was eventually titled “The Cage.”

NBC responds to the pilot

Watching “The Cage” now is a disorientating experience. In the captain’s chair is a sullen man called Pike, played by star Jeff Hunter. There is no sign of future series regulars McCoy, Scotty, Sulu, Uhura, Checkov. Spock is there, but not quite the inscrutable Spock we would come to know. He shouts and, more than once, breaks into a wide grin.

The role of chilly logician and second in command is instead taken by “Number One,” a character played by actress Majel Barrett.

“Number One” wouldn’t make it past this trial run. In tests, some men and a surprisingly large number of women objected to her stridency, which was out of touch with the gender norms of the time. NBC doubted that Barrett could carry such a prominent role (and even thought Roddenberry had cast her because she was his mistress).

“The Cage” – a complicated story about alien mind-control – was an ambitious pilot. When Roddenberry presented it to NBC, the programming executives were blown away. But the sales and marketing department wasn’t convinced. Not enough action, they thought. It would be hard to promote. Pass.

Roddenberry pleaded with NBC for another chance. He assured them he could make it action-driven, that it didn’t need to be high concept. A television miracle happened when NBC commissioned that rarest of things: a second pilot.

Roddenberry wanted Jeff Hunter to return as Captain Pike, and arranged to screen “The Cage” for him, reserving Desilu’s projection room for March 25, 1965. But Hunter was a no-show, sending his wife in his stead. “This is not the kind of show Jeff wants to do,” she told Roddenberry. “Jeff Hunter is a movie star.” Pike relinquished command.

“Jeff [Hunter] was playing Captain Pike as a very thoughtful, kind of worried, kind of angst-ridden nice guy,” Nimoy later told Shatner, in an interview for Shatner’s book “Star Trek Memories.” “Pike didn’t have the clarity or precision of character against which you could measure yourself.”

Shatner’s clear-cut performance carved out space for Nimoy to shape his saturnine Spock. “For lack of a better metaphor, on a bright sunny day, the shadows get very clear.”

The second pilot, bolstered by the Shatner/Nimoy tandem, was a winner. “Where No Man Has Gone Before” was a rollicking story about crew members irradiated in deep space and acquiring godlike powers. NBC liked it and commissioned a full season of “Star Trek.”

Righting the ship after a stormy start

Triumph quickly turned to panic for Roddenberry and for Desilu studios. Roddenberry needed scripts for the series – fast. He solicited stories from veteran TV writers, from sci-fi magazine and novel authors, and even from his office staff. His secretary Dorothy Fontana went on to become perhaps the most celebrated and prolific writer for the show.

But script problems would dog the young series. Veteran TV writers, unused to sci-fi, struggled to work within the universe Roddenberry had created. Sci-fi luminaries had boundless imaginations but little grasp of the practicalities of writing for television. Their scripts often called for casting and staging that would consume the budget for a feature film, let alone a fledgling TV series.

Roddenberry also wasn’t the best at managing the fragile egos of his writers. He took it upon himself to rewrite every script that made it on-screen, and his pages were often slow to arrive on set. Scripting was a constant source of tension and delay.

For Desilu, the elation of getting “Star Trek” picked up was dampened by the financial reality of producing the show. Network policy was to pay a set amount for each episode, calculated at something like 80 percent of the cost of production. For a small outfit like Desilu, deficit-financing both “Star Trek” and their other new show, “Mission Impossible,” required some accounting wizardry. Both were budgeted at US$200,000 per episode, with NBC kicking in $160,000. Any over-budget costs were born by the studio alone.

Tiny Desilu kept its head above water into the second season of “Star Trek” before finally drowning in debt. Studio owner and “I Love Lucy” star Lucille Ball was forced to sell to Paramount. Had she been able to hold on a few months more, she would have seen “Star Trek” picked up in 60 countries. Had she retained the rights long-term, Desilu would have benefited financially from endless reruns of the show’s 79 episodes. Network-friendly deals also ensured it would be many years before the cast would gain financial security from their iconic roles.

With the premiere date rapidly approaching, NBC chose an episode titled “The Man Trap” to be the first to air. It is, in truth, a run-of-the-mill “Star Trek” episode. The network liked that it featured a creature – a shape-shifting, salt-guzzling monster – with which the show’s heroes could do battle.

Although NBC’s marketing team had not initially seen the potential of “Star Trek,” by the time “The Man Trap” aired, they were able to trumpet the show in a glossy, multipage promotional brochure:

“As the Apollo moon shot moves steadily from the drawing board to the launching pad, STAR TREK takes TV viewers beyond our time and solar system to the unexplored interstellar deeps … the STAR TREK storylines will stimulate the imagination without bypassing the intellect. While speculating in a fascinating way about the future, the series also will have much to say that is meaningful to us today.”

A half-century later, we are on the cusp of a new CBS series set in the universe Roddenberry created. (CBS acquired the rights to “Star Trek” some years ago following a complicated series of corporate maneuverings.) Titled “Star Trek: Discovery” and scheduled for release in January 2017, the new series has no doubt had to contend with its own casting controversies, script problems and budget constraints.

The writers of the new show certainly know enough about Trek’s turbulent beginnings to temper expectations: “If you go in with open minds and open hearts, you may be rewarded,” they told a crowd eager for news at the Star Trek: Mission New York convention held over Labor Day weekend. “Whereas if you go with a set of impossible-to-realize expectations, which even you cannot specifically define, then we’re bound to fail.”