What Early Feminists Meant by ‘Equal Pay for Equal Work’

The phrase “equal pay for equal work” is in play again, with an intended meaning we all know. The idea is that government should force (really force, this time) private employers to boost the pay of women to match the rate of men in the same positions.

It’s a bad idea; more than that, the policy actually betrays the original meaning of the phrase, circa 1920; more about this in a bit.

Such a law, heavily enforced (after all, equal pay has been the law for half a century), would actually handicap women in the marketplace, taking away their ability to price compete. It would require an army of bureaucrats to enforce by overriding business control over wages and salaries. And because you can comply by either raising wages or by lowering the professional status of women, it would install a new glass ceiling for women, outpricing their labor in the market for professional advancement.

There is a mighty social cost too. It would do very cruel things to the reputation of all women of accomplishment. It would signal to the world that they only achieved through government power, the use of which is much like putting a gun to people’s heads. Anyone can do that. Nothing to brag about, nothing to feel proud about, nothing for which to take credit.

The market is achieving the goal in any case.

Misogyny and the Law

Maybe you detect a patronizing hint to the demand. It’s as if women can’t really cut it in the professional workforce. They can’t manage their own careers or make their own deals. They can’t cut it. They need the help of the state.

There’s more than a hint of misogyny here. And indeed, if you look at the history of labor legislation as it pertains to women, that is exactly what you find.

In the early part of the 20th century, restrictions on women’s work and the regulatory imposition of lower wages were put in place for eugenic reasons. The life goal of women is not to make money but to further the race. Their place is not in the factory but in the home bearing and raising children. Hence, regulations should punish their commercial ambitions.

Feminists in those days were savvy: they saw exactly what was going on. They used the phrase “equal pay for equal work” to call for an end to these regulatory restrictions on women’s work. It was a clarion call not for government but to allow the market to work! It was: let the market be permitted to pay women equal to man, because the law wouldn’t allow it.

What kinds of laws? Almost every state had laws that specifically limited when women could work: not before 6am and not after 10pm. And there were maximum working hours too: not more than 50. (That might sound like more than a full-time job, but 100 years ago, this workload was seen as less than serious.)

Such laws were typical. Also, states and even the federal government offered payments to mothers not to work. It was the earliest form of what we call the welfare state, and the motivation was, again, certainly eugenic. How can the best women breed the best offspring if they are hanging around the factories instead of using their reproductive talents to lift the quality of the human population?

At the time, the women’s movement was dedicated to repealing this law. As the New York Times reported on January 18, 1920, women “have begun a determined fight to prevent the passage by the New York State Legislature of three new labor measures and for the repeal of two laws limiting hours of employment.”

The Women’s Equal Opportunity League, centered mostly in New York, represented 20,000 working women through funding from various organizations. They demanded the right to choose the most favorable hours of employment and to choose the nature of that employment. These were harmed by existing legislation and pending laws concerning the minimum wage, the 8-hour work day, and the factory bill demanding special (and more expensive) accommodation for women workers.

The New York Times interviewed Maude Terryberry of New York. The “Lockwood transportation law,” which limited women’s rights to work as ticket takers, caused her to lose her job. Under this law, women conductors, ticket choppers, ticket sellers, and subway guards could work only nine consecutive hours, and they could not work after 10pm or before 6am. Ms. Terryberry’s life was wrecked by this law.

She told the Times:

I am not asking for sympathy but for an equal right with men to earn my own living in the best way open and under the most favorable conditions that I could choose for myself… In September I lost my job on the subway line. Not until November did I succeed in finding other work. As a ticket seller I made an average of $33 a week. The next work I could get was as an extra saleswoman in a department store at $15 per week. I do miss that $18 a week and I do hate to start over now and then on the wearying and sometimes humiliating task of finding a new job. There are thousands of other women like myself who must be self-supporting and are finding similar difficulties in making a living.

It is more important than any other consideration at this time that every human being who is obliged to earn his or her own living should have absolute freedom to find any employment which seems suitable and profitable without discrimination or restrictions of any kind. Life is hard enough at best in these days of mounting rents and high costs of living and the liberty and right to labor is as much a woman’s as a man’s just as a fair wage is no more a man’s than a woman’s privilege.

And here is what the Equal Opportunity League itself had to say:

So-called welfare legislation is not asked for or wanted by real working women. These welfare bills are drafted by self-styled social uplifters who assert that working women do not know enough to protect themselves, aided by a few women who once worked but who are now living off the labor movement.

Men’s labor unions have always opposed legislation restricting their hours of labor or regulating their wage scales. Men know that these matters can be adjusted satisfactorily only by the unions themselves.

Working at night is no more injurious than working in the daytime. Many women prefer to work at night because the wage is higher, opportunities for advancement greater, and women with children can enjoy being with their children after school hours in the day time.

Making it a crime to employ women even five minutes after the eight-hour day kills the principle of equal pay for equal work.

What kinds of bills were before the legislature? One would limit working hours per week to 48. The League said: “If the pending bill becomes a law women will be ousted from all classes of work where the wage is high enough to attract men, and they will be forced back into the canneries, textile mills, domestic service, and kindred drudgery.”

Another bill would impose a women’s-only minimum wage. The League said: “such a bill, affecting women only, while purporting to be for their benefit, would really be a serious handicap to them in competing with men workers for desirable positions.”

Yet another bill would apply to women working service professions such as secretaries, accountants, librarians, file clerks, and executives. It would limit their work to 9 hours a day. The League said that this bill would cause women to “be replaced by men” and thereby “prevent women from rising to executive positions and greatly retard their progress generally.”

If women are to hold the political quality granted by the suffrage amendment, they must insist on having industrial equality as well. It must be made clear that women do not relish – do not need – the so-called protection afforded by discriminative legislation which stunts and dwarfs – bars – woman’s progress, regardless of her ability and capacity for the fullest service, and it must be made clear that women refuse to be handicapped by laws which so restrict, hedge in and limit the scope of their activities to employers of labor.

In conclusion, cheers to the Equal Opportunity League, sadly defunct today. This was an organization that saw government for exactly what it was. It also understood that the interests of women were advanced by the dignity of freedom, not the demeaning dependence and institutionalized misogyny of state paternalism. 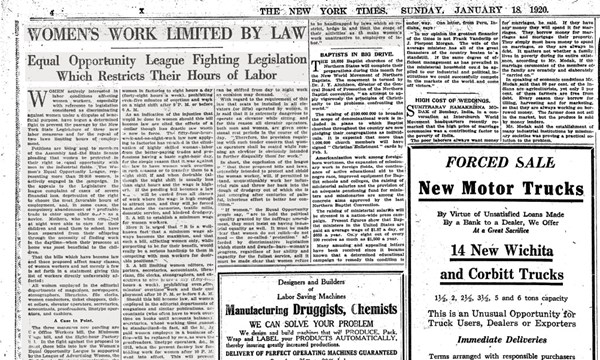