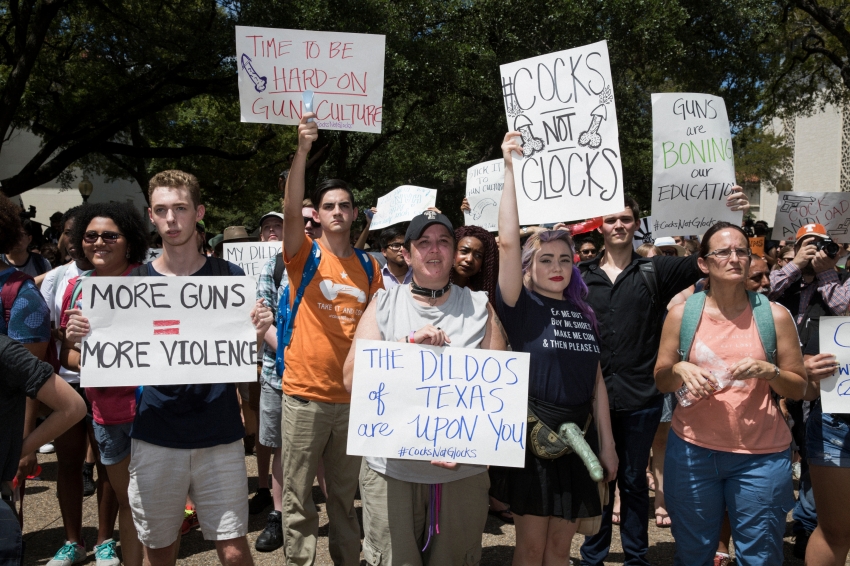 On Wednesday afternoon at the University of Texas at Austin, several students engaged in an act of protest.

The phallus-inspired action was in reaction to Texas’ new campus-carry law, which allows people with licenses to carry concealed handguns on all of state’s public university campuses.

At the same time, as the Chronicle of Higher Education points out, the state of Texas forbids openly displaying sex toys in public. They previously forbid the sale of all sex toys until 2008.

Protest is the default action for a society or group that has lost faith in rational discourse. Perhaps nothing better testifies to this loss than the fact that most of the protests that make the news today are taking place on university campuses. After all, universities are supposed to be the preeminent place where mature, rational discourse takes place.

Thus, it is not surprising to read opponents of the campus-carry law—which exists in seven other states—expressing frustration about the ineffectiveness of their arguments with opponents… Or perhaps it’s impatience about not quickly achieving their desired result:

“But Rebecca Johnston, a doctoral candidate and teaching assistant at the university, said that even with reason and facts conversations about campus carry have been frustrating. In her experience, which she detailed for crowds at the pre-rally on Tuesday, the common rebuttal has been some variation of ‘I’m a responsible gun owner.’ To Johnston, these subjective arguments are contrary to the kind of engaged and open conversations TAs and professors try to foster in classrooms. She compared those interactions to ‘talking to a brick wall.’”