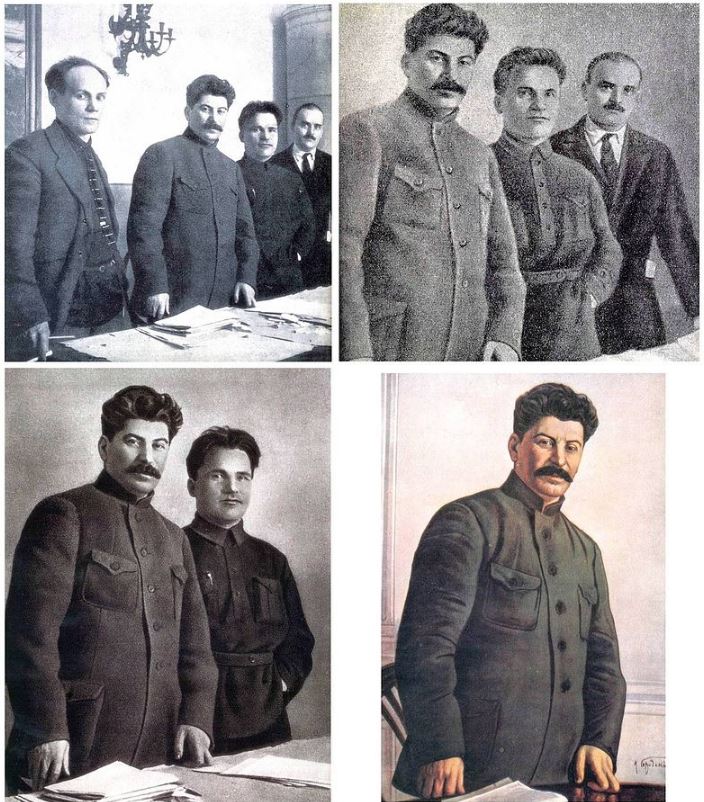 It’s no secret that governments in the 20th century killed a lot of people, but few did it with greater efficiency than Joe Stalin, whose policy of forced collectivization killed an estimated 14.5 million people between 1930-1937. Stalin employed terror with a zeal and skill few could match, marginalizing rivals such as Leon Trotsky, who was expelled from the Politburo, exiled, tried and found guilty in absentia, and eventually erased from the Party’s history.

I’ve long known of Stalin’s knack for erasing his enemies from Party photos once they had fallen out of his favor, but I recently stumbled on a wonderful visual example of it (see above).

The original photo (top left) was taken at the Fifteenth Leningrad Regional Party Conference in 1924 or 1925. It shows Nikolai Antipov (left), Joseph Stalin, Sergei Kirov (right), and Nikolai Shvernik (far right). Antiopov, who rose to become Deputy Chairman of the Council of People’s Commissars, was the first to fall out of Stalin’s favor. Shvernik vanished next. Readers can see he was airbrushed out of the photo, but Shvernik was lucky. He is the only person in the original photo to survive Stalin, whose enemies often had a penchant for dying unexpectedly. Which brings us to Kirov, a skilled politician and early Bolshevik leader who rose to become the First Secretary of the Communist Party’s powerful Central Committee. Kirov was shot in the neck in 1934 at the office at which he worked (the Smolny Institute). Though Stalin used Kirov’s death to clamp down on party dissidents, historians believe Kirov was killed on Stalin’s orders.

The images, which are now in the Public Domain, are instructive. They reveal at once the terror of the Soviet movement, the casual willingness of its leaders to employ deceit, and the importance the Bolsheviks placed on shaping narratives (regardless of truth).

The lesson? Beware those who employ deceit to shape a false version of history.