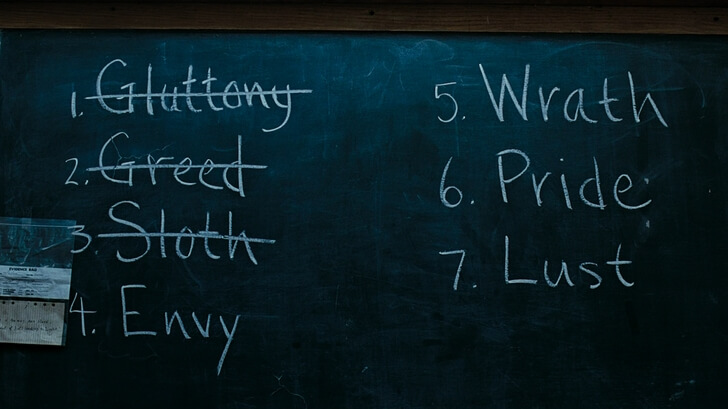 Today’s culture rarely references the seven deadly sins rooted in Christianity that had been known to nearly all men of the West for almost 2,000 years. Occasionally, one of the sins may be referenced in pop culture, but to my knowledge the most recent popular reference to them was the movie Seven (1995), a grisly crime and suspense movie starring Brad Pitt and Morgan Freeman.

In the Christian tradition, a sin is, of course, an offense against God and God’s laws perpetrated by an individual. Sin is rooted in the heart of man. As the Catholic Catechism states,

“There are a great many kinds of sins. Scripture provides several lists of them. The Letter to the Galatians contrasts the works of the flesh with the fruit of the Spirit: ‘Now the works of the flesh are plain: fornication, impurity, licentiousness, idolatry, sorcery, enmity, strife, jealousy, anger, selfishness, dissension, factions, envy, drunkenness, carousing, and the like. I warn you, as I warned you before, that those who do such things shall not inherit the Kingdom of God.’”

The Baltimore Catechism, a catechism designed for children, summarizes the seven deadly or ‘capital’ sins in the following way:

Here are the definitions for each sin as provided by the Baltimore Catechism:

Humorously, even a secular people seem to need the idea of “sin”. While our culture no longer recognizes or even remembers the seven deadly sins of the West’s Christian heritage, we still have sins that no man should violate. Indeed, to violate one of our modern sins is to call down the wrath of friends and coworkers, to draw unwanted media attention, and to even find yourself unemployed. While in the Christian tradition, one merely needs to ask for forgiveness of sin, today there is rarely any forgiveness unless one publicly admits to the sin, denounces it, and commits to never sin again. It’s all rather religious without the religion or the metaphysical belief structure.

Just so you don’t go wrong in modern America, here are the updated seven deadly sins encompassed under the broader notion of “social justice”, with definitions coming from various social justice organizations. What is common to all is that these sins are seen as forms of oppression. The thinking has deep roots in Marxism and the idea that history of composed of class struggle, of the oppressor vs. the oppressed, and that by eliminating these sins we will create an egalitarian world. Once true equality is reached, the belief is that we will see all of the suffering and evil fade away.

“It’s almost Bizzaro World how so many extra-sensitive liberals who would never, ever tell a racist joke, and are careful to use the very latest, socially-approved euphemisms for race and sexual preference, have no problem at all stereotyping working poor, working-class white people (i.e. prejudice).   What is even more enlightening is that this very same prejudice doesn’t apply to rich white people, who might also be just as racist or ignorant, but are still free of that stereotype by virtue of their wealth.   So the crime of the redneck isn’t having white skin. His crime is being poor.” (Daily Kos)

The contrasts between the traditional and the modern sets of deadly sins are fascinating. While both sets judge individual actions, they work toward very different goals and play out in very different ways in society and for individuals. That is due to the competing views of human nature.

The West, rooted in the synthesis of Christianity and Hellenism (Ancient Greek Philosophy), has traditionally viewed man as a being having a divine purpose, though also a “fallen nature”. In other words, we have dignity from God or the “Prime Mover”, but we also have the capacity to do good or evil. For many of the Ancient Greeks as well as the Christians, one of the great purposes of the individual was to work towards a more virtuous state, to work towards holiness.

The social justice view, rooted in the Marxist tradition, sees the world as only a material entity, there is no soul or spirit to man. Everything, therefore, is to be solved not by changing the spirit of the person, but rather by changing the material surroundings or structures of society. If we can eliminate all material barriers to a person’s well-being, we will eliminate what some might call “evil”. All of the faults of people come from imperfect societal structures, not actual evil in the hearts of men. The goal, therefore, is to fix those societal structures in order to create the perfect social order. Doing so may include pushing aside those individuals who may maintain those structures.

The question is, which worldview is actually better for a person to live by and for a society to be grounded upon? And which one is more realistic?