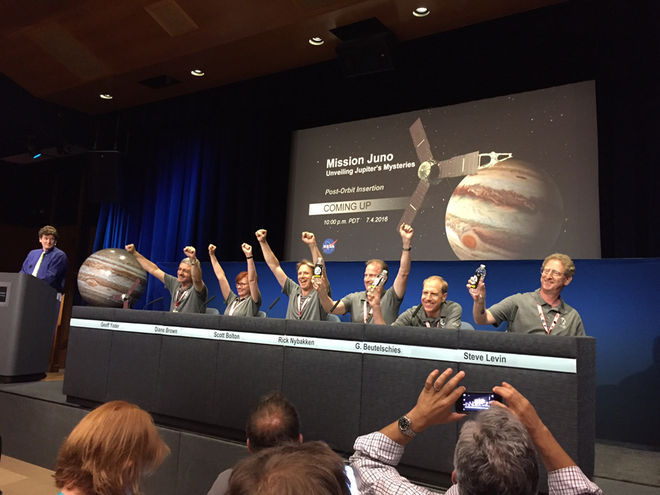 Science and space junkies are thrilled by the success of the recent Juno mission that put a NASA satellite into orbit around Jupiter. As Google writes:

Juno’s five year, 500 million mile journey will culminate in a treasure trove of new pictures and measurements taken by its nine instruments. What Juno tells us about Jupiter will detail the planet’s magnetic and gravitational fields and interior structure, revealing how it was formed and providing clues to our own planet’s humble beginnings.

You’ll notice in the image above it’s a very diverse group of NASA scientists. The reality, though, is something different. Here’s a picture of the actual NASA Juno team celebrating:

Here’s video from within the celebration:

What you’ll notice again is the near absence of diversity when it comes to the color of the NASA team’s members: Nearly everyone there is white, even when the video pans around the room. To Google’s credit, they did get the red-haired scientist right.

We’re in a curious time when any lack of diversity is seen as a bad thing, particularly if there is a great accomplishment. Arguably, that is what the Google Doodle represents.

The question is: Does it matter? What if a primarily white group of individuals achieves something great, as is the case with the Juno mission? Is that okay? Or are we now too uncomfortable depicting reality when it doesn’t match some of the values of our current culture? And if it wasn’t a primarily white group of individuals, would we be okay with depicting that reality?