PEW: Republicans and Democrats REALLY don’t like each other 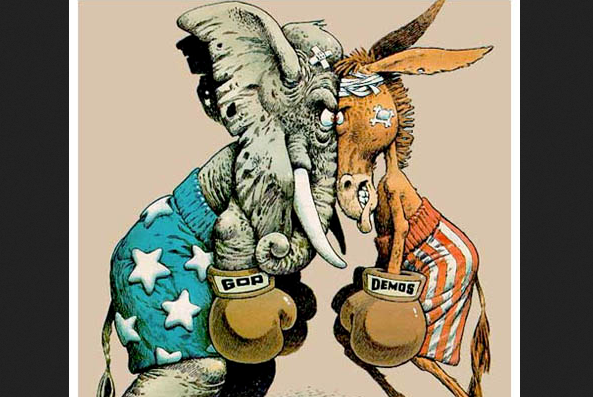 Pew Research has come out with a new study on the presence of partisanship in America, and it’s not very encouraging. The report noted:

“For the first time in more than two decades of Pew Research Center surveys, majorities of partisans have not only an unfavorable view of the other party, but a very unfavorable one. Today, 55% of Democrats and 58% of Republicans view the other party in deeply negative terms.”

In plain English? The animosity between the parties isn’t our imagination – it’s really happening. And its occurrence is simply the fulfillment of what the American founders warned would happen:

“There is nothing I dread So much, as a Division of the Republick into two great Parties, each arranged under its Leader, and concerting Measures in opposition to each other. This, in my humble Apprehension is to be dreaded as the greatest political Evil, under our Constitution.”

“If faction should long bear down law and government, tyranny may raise its head, or the more sober part of the people may even think of a king.”

“I never submitted the whole system of my opinions to the creed of any party of men whatever in religion, in philosophy, in politics, or in any thing else where I was capable of thinking for myself. Such an addiction is the last degradation of a free and moral agent. If I could not go to heaven but with a party, I would not go there at all.”

“If a faction consists of less than a majority, relief is supplied by the republican principle, which enables the majority to defeat its sinister views by regular vote. It may clog the administration, it may convulse the society; but it will be unable to execute and mask its violence under the forms of the Constitution. When a majority is included in a faction, the form of popular government, on the other hand, enables it to sacrifice to its ruling passion or interest both the public good and the rights of other citizens.”

“The alternate domination of one faction over another, sharpened by the spirit of revenge, natural to party dissension, which in different ages and countries has perpetrated the most horrid enormities, is itself a frightful despotism. But this leads at length to more formal and permanent despotism. The disorders and miseries which result gradually incline the minds of men to seek security and repose in the absolute power of an individual; and sooner or later the chief of some prevailing faction, more able or more fortunate than his competitors, turns this disposition to the purposes of his own elevation, on the ruins of public liberty.”

With the increasing animosity between the two major parties, do you think we are nearing the founders’ worst fears? Will the contention and strife between Democrats and Republicans eventually lead Americans to cave to a strong, tyrannical leader?