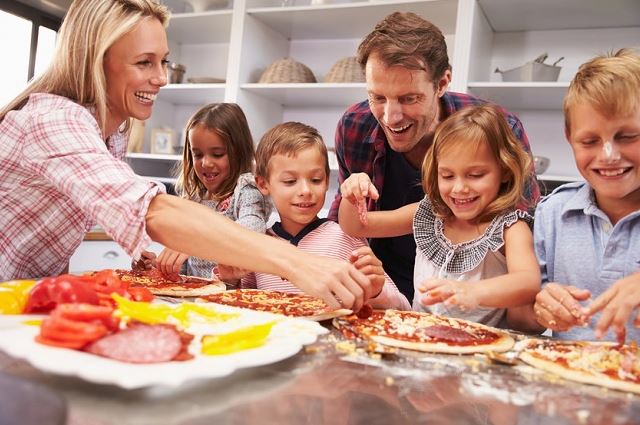 According to Food and Wine magazine, when I cook a big meal for my family, I’m not just offering nourishment and fostering important domestic traditions (and, according to studies on childhood obesity, improving my child’s chances of staying at a healthy weight), I’m “wasting money and destroying the environment.”

That’s rather rich commentary coming from a magazine whose raison d’être is to offer guidance to home cooks and provide recipes with enormous serving sizes like this onefor a meatloaf that serves twenty. That’s not a meat loaf, that’s a meat couch.

Further adding to the confusion for its readers, earlier this year, the magazinepublished an interview with food writer Michael Pollan about his new Netflix seriesCooked, which is based on his 2013 book of the same title. Pollan is trying hard to demystify cooking while encouraging people to get back to the kitchen. About cooking, Pollan told Food and Wine:

We’ve been brainwashed to think of [cooking] as drudgery… The story I’m telling is a very simple story…Which is: Look how valuable [cooking] is. Look how interesting it is. Look how pleasurable it can be.

And now, according to the same magazine, look at how it’s destroying the planet. I’m having trouble keeping up with Food and Wine’s positions on cooking. Should I or shouldn’t I?

At least Food and Wine writer Mike Pomranz has a sense of humor. After breaking the grim news that I and other kitchen dwellers hate the earth, he offered a “shout out to ambivalent and absentee mothers everywhere!” Evidently these women “get it”: they neglect their kids’ meals and yet they are the real earth mothers!

Pomranz’s source for this vision of a future where cooking resembles a Michael Bay disaster movie is a new study published in the Journal of Food Products Marketing (whatever that is), titled “Wasted Positive Intentions: The Role of Affection and Abundance on Household Food Waste.” Pomranz offers this summary:

As many can probably relate to, the research found that mothers (or, more broadly, caregivers) often like to serve large meals to show affection for their family. Families who have faced food insecurity in the past are more likely to keep extra food on hand. But having more food also led to more waste, which not only has the much discussed global impact, but also a personal financial impact: wasting $371 on average per person in the US per year.

But it isn’t just wasted food and money; the article also suggests home cooked meals could even lead to obesity.

It’s important to understand the limitations of this study. The first thing one should know (and which Pomranz fails to mention in the Food and Wine piece) is that the researchers only include twenty individuals in the study’s sample size. While one can certainly derive some information from a study that small, it’s hardly big enough to make the rather dramatic conclusion that we should all be taking a sledgehammer to our kitchens.

Secondly, the latest studies on childhood obesity come to quite a different conclusion than Pomranz’s itty-bitty study. The largest study on childhood obesity was conducted in 2010 by Ohio State University and found that children are more likely to stay at a healthy weight if they eat dinner with their families more than five times a week. Limiting television watching and getting ten or more hours of sleep a night were also shown to benefit kids.

Most importantly, the study showed that following these routines reduced the likelihood of obesity even among children within demographics with the highest risk for obesity, such as those with a family history of obesity, or living in a low-income household, or growing up in a single-parent home. More recently, an Australian study of overweight children found that children lost weight successfully when their parents were also involved in diet programs, compared to programs that only involved the children. These studies suggest that the key to controlling childhood obesity is hands-on parenting and more home cooked meals.

As for Food and Wine; the magazine probably needs to move away from writing about scientific studies and stick to recipe testing and pretty pictures of dinner parties. After all, encouraging people to stop cooking is a recipe for disaster for a cooking magazine.