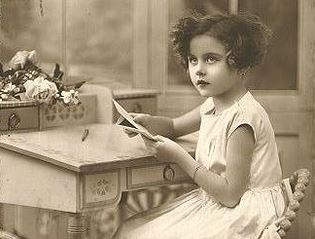 In the eyes of many, some of C.S. Lewis’ greatest works are those he wrote for children, namely, The Chronicles of Narnia. Perhaps it’s not surprising then to hear that Lewis received a number of fan letters from the children who read them.

In 1956, C.S. Lewis responded to a letter from a little girl named Joan, who had apparently sent him a sample of her own descriptive writing. Lewis took the opportunity to praise her style, but also worked in several gentle critiques. He went on to offer the following five tips to boost the little lady’s English and writing abilities:

“Always try to use the language so as to make quite clear what you mean and make sure y[ou]r sentence couldn’t mean anything else.”

2. Use Plain and Direct Language

“Always prefer the plain direct word to the long, vague one. Don’t implement promises, but keep them.”

3. Be Practical, Not Philosophical

“Never use abstract nouns when concrete ones will do. If you mean ‘More people died’ don’t say ‘Mortality rose.’”

“In writing. Don’t use adjectives which merely tell us how you want us to feel about the thing you are describing. I mean, instead of telling us a thing was ‘terrible,’ describe it so that we’ll be terrified. Don’t say it was ‘delightful’; make us say ‘delightful’ when we’ve read the description. You see, all those words (horrifying, wonderful, hideous, exquisite) are only like saying to your readers ‘Please will you do my job for me.’”

“Don’t use words too big for the subject. Don’t say ‘infinitely’ when you mean ‘very’; otherwise you’ll have no word left when you want to talk about something really infinite.”

Considering that only 27 percent of American 8th and 12th graders are proficient in writing, perhaps today’s students would be wise to take Lewis’ advice to little Joan to heart.