The Woman Who Warned the World about Hitler 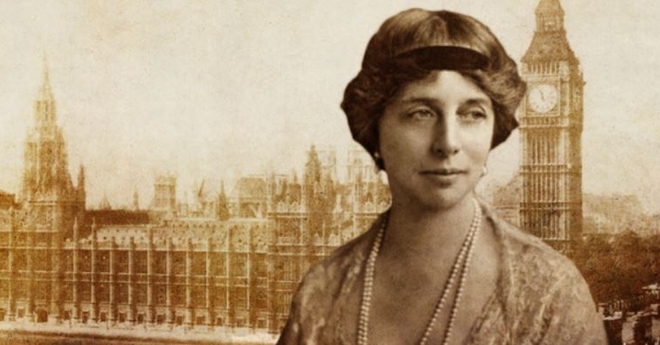 Some people can smell a rat a mile away. Others don’t notice even when the odor wafts right under their noses.

Olfactory proficiency by itself doesn’t make you a hero. But if you’re among the first to pick up the scent and warn others, and then you put your political future on the line to save society, you’ve got something that makes you heroic. As C.S. Lewis wrote in The Magician’s Nephew, “What you see and hear (and smell) depends a good deal on where you are standing; it also depends on what sort of person you are.”

Katharine Margory Ramsey combined courage and character with a great nose for rats. She had principles and the guts to stand by them.

Born of Scottish noble blood in Edinburgh in 1874, “Kitty” (as she was known to close friends) was an accomplished composer and pianist. She became the Duchess of Atholl after her husband succeeded his father as the Duke of Atholl in 1917. Author Lynne Olson, in her superb 2007 book, Troublesome Young Men (about the Tory upstarts in the 1930s who challenged their elder and leader, Prime Minister Neville Chamberlain), describes her as a “diminutive woman with large, expressive blue eyes … cultured, diffident, and unworldly, with little interest in calling attention to herself.”

At the urging of her husband and former Prime Minister David Lloyd George, the Duchess stood for a seat in Parliament in 1924. She won. Only two other women had ever before been elected to the House of Commons. She became the first Conservative Party MP to hold ministerial office when Prime Minister Stanley Baldwin appointed her to a junior post in education.

The men in government assumed Atholl would be quiet and do the womanly thing: whatever she was told. Even Winston Churchill snubbed her at first, telling her directly, “I find a woman’s intrusion into the House of Commons as embarrassing as if she burst into my bathroom.” Many now think of Churchill as the sage who bravely opposed Chamberlain’s policy of appeasing Hitler, but Kitty Atholl was one of those few who worked to stiffen Churchill’s spine when it was still pliable. Churchill later came to appreciate her greatly.

As her years in Parliament wore on, Atholl’s principles deepened, and her courage blossomed. In 1935, she resigned from the leadership position of whip for the Conservative Party because of what she derisively labeled the government’s “national socialist tendencies” in its domestic agenda. She was, in her own way, a precursor to Margaret Thatcher, who was just 10 years old at the time.

The first big rat to catch Atholl’s attention was ensconced in Moscow. Less than a decade after the Bolshevik revolution, the Soviet experiment had attracted naïve acolytes in the West. Reporter Lincoln Steffens famously wrote after his 1919 visit to the USSR, “I have been to the future and it works.”

One of the worst of what Lenin would term “useful idiots” was New York Times reporterWalter Duranty, who, at the height of the Stalin-induced famine in Ukraine that killed millions, denied there was a hunger problem. The Duchess of Atholl was no such fool.

In 1931, Atholl published a 200-page book titled The Conscription of a People. It was a blistering, well-documented indictment of the savage collectivization of life in the Soviet Union. Her investigations revealed that

Russia has carried through revolution on a scale which knows no parallel, and which, even after thirteen years, is as ruthless as in its early days. She has undermined marriage and is rapidly breaking up family life. She wages ceaseless war on all religion. She is responsible for the most comprehensive and continuous experiment in the nationalization of industry, banking and trade that has ever been seen.

Atholl’s book was one of the earliest and most detailed critiques of the communist regime from a high-level British official. Forced labor, the liquidation of the kulaks, mass seizures of property, an extensive secret police network, and an unprecedented diversion of resources to the military meant one thing: the Bolsheviks were a menace to their own people and a growing threat to world peace.

The Duchess decried the British government’s extension of credit to Moscow. “Can those in any country who value liberty regard such a position with equanimity?” she asked. “Are the citizens of the United Kingdom in particular to tolerate any longer the guaranteeing by taxpayers’ money of a system so utterly repugnant to British traditions?”

The rats in Moscow were alarmed at Atholl’s denunciations. Who was this Scottish Cassandra who dared so publicly to question the subsidies coming their way from the government of her own party? (In The Fall of Troy by Quintus Smyrnaeus, Cassandra desperately tried to warn the Trojan people about the peril of a certain large wooden horse.)

After 1933, Atholl’s wrath turned against the rats in Berlin. When she read Hitler’s Mein Kampf in 1935, she entertained no illusions about where he was headed. “Never can a modern statesman have made so startlingly clear to his reader his ambitions,” she noted. She was now on her way to becoming, in Olson’s words, “the boldest Tory rebel of all.”

Even more vigorously than Stanley Baldwin, Neville Chamberlain kowtowed to the Nazi dictator. Those “troublesome young men” in his Conservative Party — such as Churchill, Antony Eden, and Harold McMillan — formed an opposition to appeasement, but at first they focused exclusively on Hitler. They sought to placate Mussolini in Italy and Franco in Spain. Atholl saw all fascist dictators the same way she saw all communist dictators: as evil men not to be trusted, let alone subsidized. She was a constant thorn in the side of men in power who wanted to cut deals with unsavory thugs of any stripe.

In September 1938, the infamous Munich conference gave Hitler a green light to forcibly incorporate the Sudetenland (a Czech region along the border with Germany) into the Third Reich. The hopelessly naïve Chamberlain famously waved the agreement on the tarmac on returning to London. “Peace in our time,” he declared. War seemed to be averted. As much of the world breathed a sigh of relief, Atholl was strongly advised by her husband and others to endorse the Munich accord. She not only refused to do so; she wrote and widely distributed a pamphlet that castigated it.

The prime minister reacted furiously. He strong-armed the local Conservative Party officials in Scotland to select a new candidate for Parliament to replace Atholl, who then resigned from the party and announced she would run as an Independent in the special by-election set for December 1938. The country’s attention was riveted on the fierce campaign that ensued. The prime minister saw to it that Atholl’s opponent received showers of cash and endorsements.

Cowed by Chamberlain, the male anti-appeasement MPs of the party wouldn’t go to Scotland to campaign for the Duchess. Churchill first accepted and then, under pressure, rescinded his approval of an invitation to speak on her behalf. As reported in Olson’s book, he at least sent a letter of endorsement that she distributed before the voting. Churchill wrote,

You are no doubt opposed by many Conservatives as loyal and patriotic as yourself, but the fact remains that outside our island, your defeat at this moment would be relished by the enemies of Britain and of freedom in every part of the world. It would be widely accepted as another sign that Great Britain … no longer has the spirit and willpower to confront the tyrannies and cruel persecutions which have darkened this age.

She lost by a heartbreakingly slim margin. Chamberlain was delighted, but after all the pressure and resources he had brought to bear against her, the verdict was no ringing endorsement of his appeasement policy. When Hitler invaded Poland less than nine months later, Kitty Atholl was vindicated. A humiliated Chamberlain sulked through the remaining few months of his tenure. Out of government, Atholl spent the war years working mightily to relieve the awful conditions of European refugees. She died in 1960 at age 85.

Katharine Atholl had smelled danger and said so, years before the elite of her own political party mustered similar courage. How different might history have been if there were more people like her?