Forgotten: What happened after the Doolittle Raid. 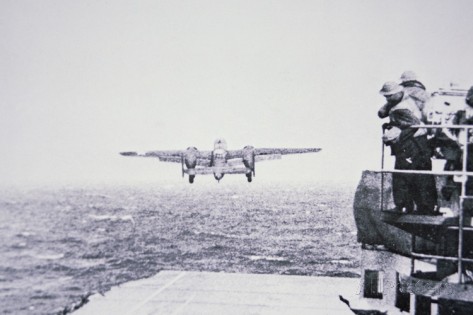 In the early days of World War II as the Japanese advanced their “Greater East Asia Co-Prosperity Sphere” through the military subjugation of an incredible number of peoples, islands, and nations, they turned their attention to the United States.

In what was hoped to be a knock-out blow to the United States, the Japanese struck at Pearl Harbor on December 7, 1941 sinking numerous ships and leaving the American Pacific Fleet in disarray. The attack was followed by the Japanese conquests of Wake Island and the Philippines, both held by the United States.

In its feeble state following the attacks, the United States pursued revenge with a remarkable attack against the Japanese homeland. It’s known as the Doolittle Raid.

On April 18, 1942, under the leadership of Lieutenant Colonel James Doolittle, the U.S. Navy and U.S. Army Air Force launched sixteen B-25 medium bombers from the aircraft carrier Hornet. The planes then  flew over Japan, bombing military targets, and because there was no way for a plane the size of a B-25 to land on an aircraft carrier, continued to China after the attack.

Fifteen of the B-25s crashed in China following the attack and one crashed in Russia. Eight American pilots were captured by the Japanese who tortured and starved them.

While there was little long-term damage that resulted from the attack, it was both an incredible boost to American morale at the time and quite damaging to Japanese prestige. As a result, the Japanese retribution against the Chinese for aiding the American pilots was swift and brutal.

Here’s how Edward Jablonski describes the Japanese action in Airwar:

Possibly the greatest injury was to the self-esteem of the Japanese Samurai. Although it had not been hit, the very fact that the air over and around the Emperor’s Imperial Palace had been violated by enemy aircraft was a gross affront to those who had sworn their very lives to keep this from happening. The militarists, with a keen professional eye, tended to denigrate the raid – English-speaking members referred to it as the “Do Nothing Raid” – but they knew better. It was a harbinger of things to come.

The reaction to the raid was savagery unleashed. The mistreatment of the eight prisoners was reprehensible, but the slaughter of the Chinese which followed the raid was manic barbarism without military justification. Fifty-three battalions of Japanese troops moved inland, ravaging the land, and in about three months they had killed 250,000 Chinese – soldiers as well as civilians – in the rampage. Villages in which the American airmen had hidden or were cared for were all but deracinated. Chinese who had taken small token gifts – coins, gloves, a scarf – or who had taken parts from the planes were tortured and killed. Wang Poo-fang, a village schoolteacher from Ihwang, near which the plane of Lieutenant Harold Watson had crashed, related a single incident which could be multiplied a thousand times over.

‘We fed the Americans,’ Wang said, ‘and carried them safely so that they could bomb Tokyo again. Then the dwarf-invaders came. They killed my three sons; they killed my wife, Angsing; they set fire to my school; they burned my books; they drowned my grandchildren in the well.’ The schoolmaster, too, had been flung into the well, but managed to climb out after the Japanese had moved on. There was little of his village left to him.

All airfields, which might have served as landing spots for possible future raids, were destroyed, ridged with trenches (all work being done by Chinese), and rendered unusable. And then the Japanese troops moved back from a wasteland of twenty thousand square miles.

Still to this day, Americans debate the acts of our nation towards the Japanese, particularly the fire-bombings and the atomic bombs. But we often forget the savagery of the Japanese that the peoples who came into conflict with them experienced and how that shaped future actions against them as they were pushed back to their homeland and eventually conquered.