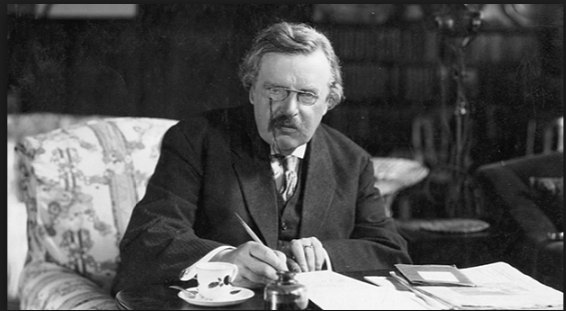 Oscar Wilde’s literally genius can be found in many literary styles, but it was his use of paradox that truly set him apart from all others.

The possible exception to this, of course, was a contemporary of Wilde’s: G.K. Chesterton.

In many ways—politics, temperament, religion, and taste in art—the two men could not have been more different. But the Irishman and Englishman shared a mastery of letters and a unique talent to convey profound ideas through paradox.

Through this technique each sought to explain the world in which they existed. Wilde also used it, at times, simply to entertain.

This seemed to annoy the conservative Chesterton, a man who took ideas very seriously and came to believe that Wilde used his literally talents irresponsibly.

In 1909, about a decade after Wilde’s death, Chesterton explained his frustration with Wilde. Writing in the Daily News, he accused the Irishman of sharing ideas he knew to be “literally valueless” in his effort to appeal to the bourgeois he claimed to scorn. (“The truth is that no artist so really great ever worked so much for the bourgeois as Oscar Wilde.”)

Chesterton offered examples of what he regarded as Wilde’s banal lines and lazy thought:

Wilde: “What is an immoral woman? The kind of woman a man never gets tired of.”

Chesterton: “…rubbish. It is without value of any sort or kind. It is not symbolically true; it is not fantastically true; it is not true at all. Anyone with the mildest knowledge of the world knows that nobody can be such a consuming bore as a certain kind of immoral woman. That vice never tires men, might be a tenable and entertaining lie; that the individual instrument of vice never tires them is not, even as a lie, tenable enough to be entertaining.”

Wilde: “Nothing is so fatal to a personality as the keeping of promises, unless it be telling the truth.”

(Chesterton: “That is said by a tried quack.”)

Wilde: “Nothing survives being thought of.”

Chesterton: “nonsense, but nonsense of the nobler sort; there is an idea in it”

It’s easy to see how a man such as Chesterton, arguably the fiercest and most thoughtful opponent of moral relativism of his day, would find Wilde’s thoughts and prose so frustrating.

Chesterton believed that Wilde was using his immense talent not to enlighten but to obfuscate. Instead of revealing truth, Wilde was attempting to deny and destroy it.  He used irresistible prose without asking (or caring?) whether it was true or false.

The Englishman tipped his hat to Wilde for lines he found brilliant and true—“Life is much too important to be taken seriously”; and this: “A man can be happy with any woman so long as he does not love her”—but it’s clear he believed Wilde used his talent irresponsibly.

“He descended below himself to be on top of others. He became stupider than Oscar Wilde that he might seem cleverer than the nearest curate. He lowered himself to superiority; he stooped to conquer.”