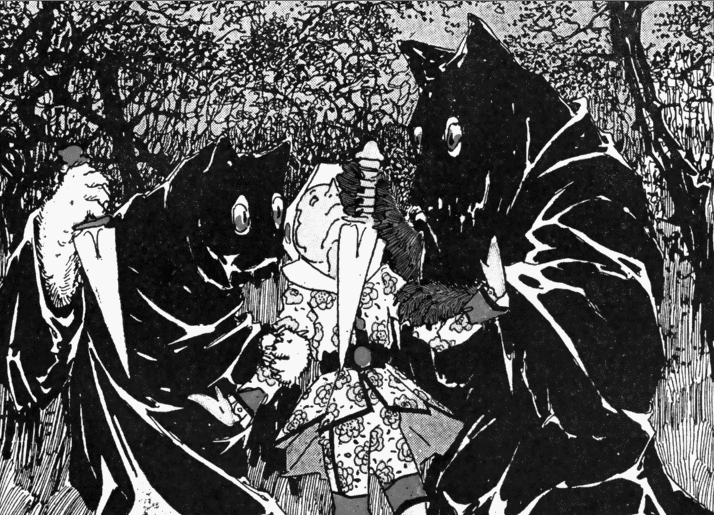 Recently while hunting for children’s books with my 4-year-old daughter, I picked up a copy of Pinocchio for a dollar. That night for fun I began to thumb through the book.

Now, I recall hearing at some point that Carlo Collodi’s Pinocchio was not quite the charming, good-natured lad we all remember in Walt Disney’s happy “When You Wish Upon A Star” version of the story.

What I didn’t expect was to find Pinocchio insufferable. And Gepetto? The sweet toymaker of the film is, at times, a quarrelsome brute prone to fits of violence. Jiminy Cricket? Well, our philosophizing cricket is flattened by Pinocchio with a mallet in the fourth chapter (the same chapter he’s introduced) after he made the mistake of giving the wooden-headed puppet some sound advice. (The ever-creative Shrek creators had some fun with Jiminy’s violent demise in Scared Shrekless, their Halloween parody of The Exorcist.)

That, however is only the beginning.

Things get really strange after Pinocchio skips school to go to a show. (To get in, Pinocchio sells his school book, which Gepetto purchased with money he received for selling the coat off his back.) At the show Pinocchio causes a bit of commotion and is seized by the Showman, a man named Fire-Eater, to be burned alive. The chapter ends with Pinocchio screaming, “O Daddy, save me! I don’t want to die.”

Pinocchio is spared by the Showman, who decides he can eat his mutton half done. Upon his release his is quickly hoodwinked by the familiar fox and cat, who promise Pinocchio they can double his five gold pieces through a scheme. The scheming animals only con the wooden-headed child out of one of his coins, after which Jiminy makes a return—as a ghost.

Jiminy offers to the boy who murdered him some advice: Go home. Pinocchio’s response: “I am going forward.” (And, like an annoying child, he repeats the line over and over.)

Go forward he does. But not before Jiminy yells out, “Good night, Pinocchio. May Heaven preserve you from dangers and assassins!”

The reader grasps this bit of foreshadowing, but not Pinocchio. He continues talking about all the things he’ll do to any assassins who dare to appear. Of course assassins do appear–Pinocchio’s friends, the cat and the fox, disguised in charcoal sacks. The brigands demand his money. They promise to kill him if he refuses. And his father. The brigands attempt to pry the coins from Pinocchio’s mouth, where he had hidden them, with a knife, but the puppet bites off the hand of one of his assailants. He gleefully spits the hand out and begins to struggle more furiously.

He manages to flee, and encounters a house in the woods. All of the occupants, however, are dead, including a blue-haired dead girl who shares this secret with a petrified Pinocchio. The assassins then track down the puppet and begin plunging knives into his body. When the tactic proves ineffective, they hang him from the nearest tree.

After the noose tightens on the boy’s throat and he is left for dead, he realizes nobody is coming for him. “O Daddy! If only you were here,” he moans. Then he closes his eyes, shudders once, and goes stiff.

Pinocchio did not die for good, however. Collodi brought him back, apparently by popular demand. (The stories were originally published as serials.)

This is just a taste of the Rasputin-like torment visited up on the child. Throughout the book Pinocchio is also kidnapped, flogged, starved, imprisoned, beaten, and burned.

Collodi died in Florence in 1890 never knowing his character would become world famous. One cannot help but wonder if he would have been overjoyed or appalled.

We often think today our children are bombarded with more adult themes than ever before, but it’s easy to miss the fact that there has been great ebb and flow in the history of our literary (and cinematic) culture.