The ‘Haunted’ Baby Craze in Thailand 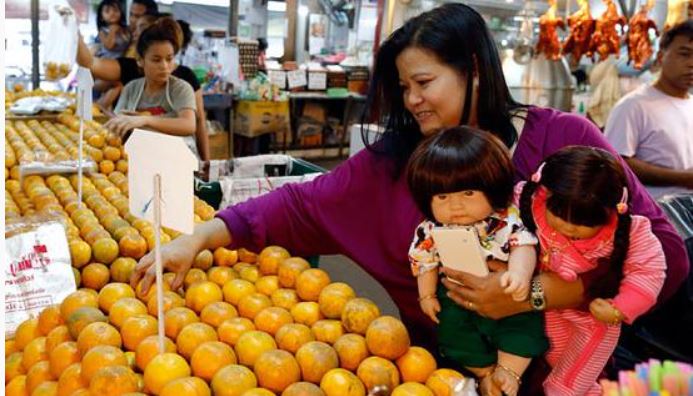 The internet is buzzing about the baby-boom underway in Bangkok—a plastic baby boom.

That’s right, grown women are carrying around little dolls called luk thep (“little angels”). They apparently take them everywhere and treat them like an actual child complete with manicures at salons and meals at restaurants. Airlines have even set up guidelines to accommodate the lifelike looking children.

“The customers can put the dolls on their lap while flying,” Patee Sarasin, CEO of low-cost airline Nok Air, told CNN earlier this year. “If they want to buy a seat, it is the most expensive price possible.”

How popular is the craze? Well, the Atlantic reports Thailand’s prime minister has actually urged citizens not to spend money on the dolls if they are cash-strapped, fearing some may forego basic necessities to purchase a new plastic child.

What’s behind the craze? One theory is that it is a product of Thailand’s unusual religious blend (a mix of Buddhism and Hinduism) and history of object worship.

Mae Ning, a doll-seller and self-professed master of Hindu ritual, is widely credited as the first person to transform plastic dolls into sacred luk thep. Last year, Thai celebrities started posting photos of the dolls on social media and crediting them with bringing good fortune. One radio DJ said that his lifeless look-alike, a doll named Wansai, had helped him recoup a lost job and later land a film gig. Ever since, assorted Buddhist monks, fortune-tellers, and other enterprising individuals have been conducting rituals that promise to imbue dolls with spirits.

A second theory is that the craze is a result of social unease in Thailand, which is suffering from a stagnant economy and political unrest.

More and more media outlets have covered Thailand’s “haunted doll fad,” undoubtedly because many people in the West find the phenomenon strange.

What’s unclear from my perusing of materials is whether or not people in Thailand truly believe the dolls are imbued with a spirit that brings good fortune or if the craze is more social in nature, akin to Americans collecting baseball cards (and in some cases spending thousands of dollars on them) or the Kewpie Doll craze in the early twentieth century.

If it’s the former, I’ll admit that I find that slightly creepy. Why?

For one, the Christian mind has been trained to regard the idea of spiritual possession of objects as dangerous. Second, I saw the Telly Savalas Twilight Zone episode as a kid. (Great episode, still a little creepy; watch the clip below if you’re not all alone in a dark house.)

So what does the luk thep craze represent, if anything? Is it harmless fad? Dangerous demonism? Is it interesting and exotic? Or is it just weird, more evidence that humans are irrational creatures capable of believing anything?