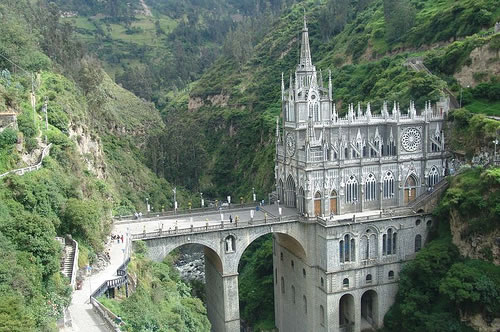 A scientific study conducted a few years ago found that the sorts of architecture once typical of “museums, churches, and libraries” has measurable effects on brain function that are similar in some ways to traditional forms of meditation.

That’s potentially very significant, not only for the small elite that designs such buildings today, but for the countless people who use them.

My title is derived from that of a recent blog post from an international Catholic site called Aleteia, which first called my attention to the study. The post also uses fine pictures to illustrate the sort of architecture that the study’s lead, Prof. Julio Bermudez of the School of Architecture and Planning at the Catholic University of America, is talking about.

The details of how Bermudez and his team went about confirming the theory are fascinating. For instance, they used something called ‘functional magnetic resonance imaging” (fMRI):

“…to capture the effects of architecture on the brain. His team operates with the goal of using the scientific method to transform something opaque—the qualitative ‘phenomenologies of our built environment’—into neuroscientific observations that architects and city planners can deliberately design for. Bermudez and his team’s research question focuses on buildings and sites designed to elicit contemplation: They theorize that the presence of ‘contemplative architecture’ in one’s environment may over time produce the same health benefits as traditional ‘internally-induced’ meditation, except with much less effort by the individual.”

So what did the team actually do?

“By showing 12 architects photos of contemplative and non-contemplative buildings from facade to interior, the researchers were able to observe the brain activity that occurred as subjects ‘imagined they were transported to the places being shown.’”

The controls for the sample selection were designed to heighten relevant factors and screen out extraneous ones. As to the first:

“In addition to posing an interesting control on the experiment, the decision to use architects was a strategic one meant to increase the researchers’ chances of achieving conclusive results. Though everyone encounters architecture, studies on the built environment struggle for funding because, as Bermudez remarked with a sigh, ‘it’s difficult to suggest that people are dying from it.’ Architects were a natural choice for the pilot study because, the team reasoned, their critical training and experience would make them sensitive to features of the buildings that a lay person might overlook.”

As to the “second control”:

“All of the architects were white, right-handed men with no prior meditative training, creating the necessary (if comical) uniformity for neuroscientific research—the team wanted to ensure that the brain scans would not be influenced by factors unrelated to the photos, like gender, race, or handedness. For instance, the brain scans of left- and right-handed people often look different even when subjects are performing the same task.”

And what, exactly, were the results? Cutting through the verbiage:

We can all agree that architectural design affects our moods. It’s good to have some scientific validation of that—especially if this study can be replicated with a broader sample, as it ought to be.