How Grade Inflation Erodes the Meaning of College 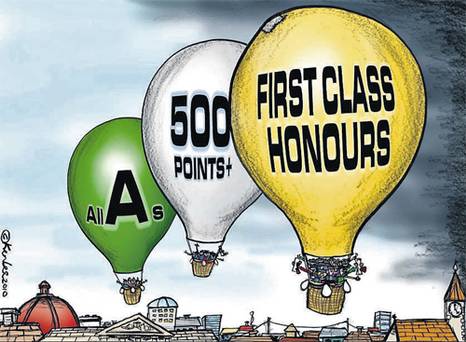 Every so often, the issue of grade inflation makes the headlines, and we are reminded that grades are being debased continuously.

That happened in late March when the two academics who have most assiduously studied grade inflation—Stuart Rojstaczer and Christopher Healy—provided fresh evidence on their site GradeInflation.com that grade inflation continues.

The authors state, “After 30 years of making incremental changes (in grading), the amount of rise has become so large that what’s happening becomes clear: mediocre students are getting higher and higher grades.”

In their database of over 400 colleges and universities covering the whole range of our higher education system, from large and prestigious universities to small, non-selective colleges, the researchers found not one where grades had remained level over the last 50 years. The overall rise in grades nationally has brought about a tripling of the percentage of A grades, although some schools have been much more “generous” than others.

Or, to look at it the other way, some schools have been much better than others in maintaining academic standards. For instance, Miami of Ohio, the University of Missouri, and Brigham Young have had low grade inflation. Why that has been the case would be worth investigating.

In North Carolina, Duke leads in grade inflation, followed closely by UNC. Wake Forest is in the middle of the pack, while UNC-Asheville has had comparatively little.

But why have American colleges and universities allowed, or perhaps even encouraged grade inflation? Why, as professor Clarence Deitsch and Norman Van Cott put it in this Pope Center piece five years ago, do we have “too many rhinestones masquerading as diamonds?”

Part of the answer, wrote Deitsch and Van Cott, is the fact that money is at stake.  “Professors don’t have to be rocket scientists to figure out that low grades can delay student graduation, thereby undermining state funding and faculty salaries,” they observed.

It might surprise Americans who believe that non-profit entities like colleges are not motivated by money and would allow honest academic assessment to be affected by concerns over revenue maximization, but they do.

But it is not just money that explains grade inflation. At least as important and probably more so is the pressure on faculty members to keep students happy.

History professor Chuck Chalberg put his finger on the problem in this article in the Minneapolis Star-Tribune.

Chalberg writes about a friend of his who had completed her Ph.D. in psychology and was working as a teaching assistant to a professor and graded the papers submitted by the undergraduates “with what she thought was an appropriate level of rigor.” But it was not appropriate, she soon learned. The professor “revised nearly all of the grades upward so that were left no failures, few C’s, and mostly A’s and B’s.”

Had she underappreciated the real quality of the work of the students? No, but, Chalberg continues, “the students thought that they were really, really, smart, and would have been quite angry and thrown some major tantrums if they got what they actually deserved.”

Thus, giving out high but undeserved grades is a way of avoiding trouble. That trouble could come from students who have an elevated and unrealistic view of their abilities and will complain about any low grade to school officials.

It could also come from their parents, who have been known to helicopter in and gripe to the administrators that young Emma or Zachary just can’t have a C and if it isn’t changed immediately, there will be serious repercussions.

Another possibility is that faculty will give out inflated grades to avoid conflict with those school administrators.

Low grades affect student retention and at many colleges the most important thing is to keep students enrolled. Back in 2008, Norfolk State University biology professor Stephen Aird lost his job because the administration was upset with him for having the nerve to grade students according to their actual learning rather than giving out undeserved grades just to keep them content. (I wrote about that pathetic case here.)

Could it be that students are getting better and deserve the higher grades they’re receiving?

You’d get an argument if you ran that explanation by Professor Ron Srigley, who teaches at the University of Prince Edward Island. In this thoroughly iconoclastic essay published in March, he stated, “Over the past fourteen years of teaching, my students’ grade-point averages have steadily gone up while real student achievement has dropped. Papers I would have failed ten years ago on the grounds that they were unintelligible…I now routinely assign grades of C or higher.”

Professor Srigley points to one factor that many other professors have observed—students simply won’t read. They aren’t in the habit of reading (due to falling K-12 standards) and rarely do assigned readings in college. “They will tell you that they don’t read because they don’t have to. They can get an A without ever opening a book,” he writes.

We also have good evidence that on average, today’s college students spend much less time in studying in homework than students used to. In this 2010 study, Professor Philip Babcock and Mindy Marks found that college students today spend only about two thirds as much time as they did some fifty years ago. That’s hardly consistent with the notion that students today are really earning all those A grades.

On the whole, today’s students are receiving substantially higher grades for substantially lower academic gains than in the past.

Grade inflation is consistent with the customer friendly, “college experience” model that has mushroomed alongside the old, “you’ve come here to learn” college model. For students who merely want the degree to which many believe themselves entitled, rigorous grading is as unwelcome as cold showers and spartan meals would be at a luxury resort. Leaders at most colleges know that if they don’t satisfy their student-customers, they will find another school that will.

Exactly what is the problem, though?

Grade inflation could be seen as harmful to the downstream parties, the future employers of students who coast through college with high grades but little intellectual benefit. Doesn’t grade inflation trick them into over-estimating the capabilities of students?

That is a very minor concern. For one thing, it seems to be the case that employers don’t really pay much attention to college transcripts. In this NAS piece, Academically Adrift author Richard Arum writes, “Examining post-college transitions of recent graduates, Josipa Roksa and I have found that course transcripts are seldom considered by employers in the hiring process.”

Instead, the real harm of grade inflation is that it is a fraud on students who are misled into thinking that they are more competent than they really are.

It makes students believe they are good writers when in fact they are poor writers. It makes them believe they can comprehend books and documents when they can barely do so. It makes them think they can treat college as a Five Year Party, or a Beer and Circus bacchanalia because they seem to be doing fine, when they’re actually wasting a lot of time and money.

Dishonest grading from professors is as bad as dishonest health reports from doctors who just want their patients to feel happy would be. The truth may be unpleasant, but it’s better to know it than to live in blissful ignorance.

George C. Leef is director of research at the John W. Pope Center for Higher Education Policy. This article was originally published by the Pope Center.