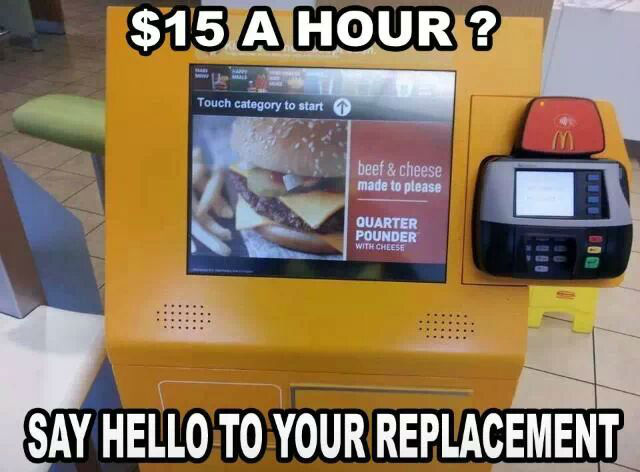 Ed Rensi, the former president of McDonald’s USA, wrote an article that appeared in Forbes recently in which he argued that raising the minimum wage to $15 an hour could cost about a million jobs in limited service restaurants.

Rensi, who worked at McDonald’s for three decades before he became Chief Executive Officer, made three key points: 1) A $15 minimum wage would eat up 75 percent of the profit for a typical McDonald’s franchise owner; 2) Franchise owners would be compelled to shift to automated kiosks to protect their bottom line; 3) the job losses would primarily impact young workers.

Many people will argue that McDonald’s and other restaurants will simply raise prices to cover costs, but Rensi said it’s not that easy:

Recouping those costs isn’t as simple as raising prices. If it were easy to add big price increases to a meal, it would have already been done without a wage hike to trigger it. In the real world, our industry customers are notoriously sensitive to price increases. (If you’re a McDonald’s regular, there’s a reason you gravitate towards an extra-value meal or the dollar menu.) Instead, franchisees can absorb the cost with a change that customers don’t mind: The substitution of a self-service computer kiosk for a full-service employee.

Rensi then took a poke at labor organizers, suggesting that they would be the ones responsible for the labor carnage, not McDonald’s.

I suspect that the labor organizers behind this campaign for a $15 minimum wage are less interested in helping employees, and more interested in helping themselves to dues money from their paycheck. They’re unlikely to succeed in their goal of organizing the employees of McDonald’s franchisees, but they may well succeed in passing $15 into law in other sympathetic locales. You’ll see their legacy every time you visit the Golden Arches, where “would you like fries with that” is a button on a computer screen rather than a phrase spoken by an employee in their first job.

First, it seems intuitive that customers wouldn’t mind punching numbers on a screen as much as paying $9 for a Big Mac meal (versus the $6 we pay today). And if that’s correct, it’s difficult to argue with Rensi’s conclusion that most franchises would adjust by adding automated customer service machines, similar to those already popular in European franchises, and reducing their work force.

If that is the case, it’s probably true that we’d be pricing many young people out of employment (particularly in urban areas such as New York and Washington, D.C., where youth unemployment already sits at about 30 percent).

Liberals (here) and conservatives (here) each have their arguments and models showing how minimum wage laws do or do not increase unemployment. (Though it’s worth pointing out that the proposed $15 minimum wage is much steeper increase than your typical minimum wage hike.)

But sometimes events shed more light on a subject than literature. As it happens, the University of California at Berkeley just last week provided a real-life case study on this very question. One week after passing a $15 minimum wage, the university fired 500 employees.