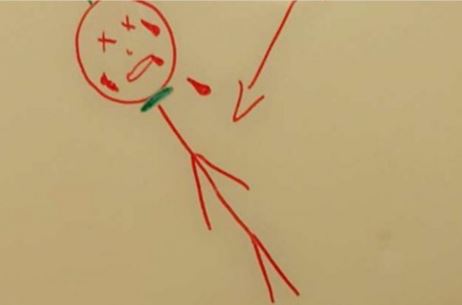 Authorities have identified the culprits behind a racist drawing found on a whiteboard at Salisbury University in Maryland.

The image, found April 10 on a whiteboard in Blackwell Library, showed a stick figure being hung and labeled with a racial slur. Underneath was the hashtag “#whitepower.”

The university confirmed Tuesday, April 26, the students involved in the incident were black, spokesman Richard Culver wrote in an email. The university would not provide names of the students, citing the federal Family Educational Rights and Privacy Act.

The drawing can be accessed below. The question, of course, is what the motivation behind the drawing was.

Wow. I have no words. Whoever drew this in Blackwell is sick. This makes me angry as hell. pic.twitter.com/I3YwmgxkUW

The student body at Salisbury is a little less than 9,000 students; roughly 25 percent of those students are minority students, according to a recent university report. Apparently there has been racial tensions at the school.

On Feb. 8, a few months after students reportedly walked out of a meeting with university leaders, the Salisbury Student Committee issued a letter to university president Janet Dudley-Eshbach.

The letter is not particularly negative in tone, but did suggest “the current environment on campus takes a huge toll on the psyche of students of color affected by the subconscious oppression.” It’s unclear if the walkout or the letter are related to the drawing.

The drawing could simply be a poor (and potentially dangerous) joke by irresponsible students. Conversely, it could also have been a calculated effort to pressure university leaders.

The emerging culture of victimhood on campuses is very real, and the stakes are very high. In an environment where microaggressions can kill academic careers, a macroaggression—such as a drawing depicting a hanging person of color from a tree—can create a panic (or a revolution).

What are your thoughts? Will this go down as a bad joke or an act intended to stoke fears of racial terrorism?