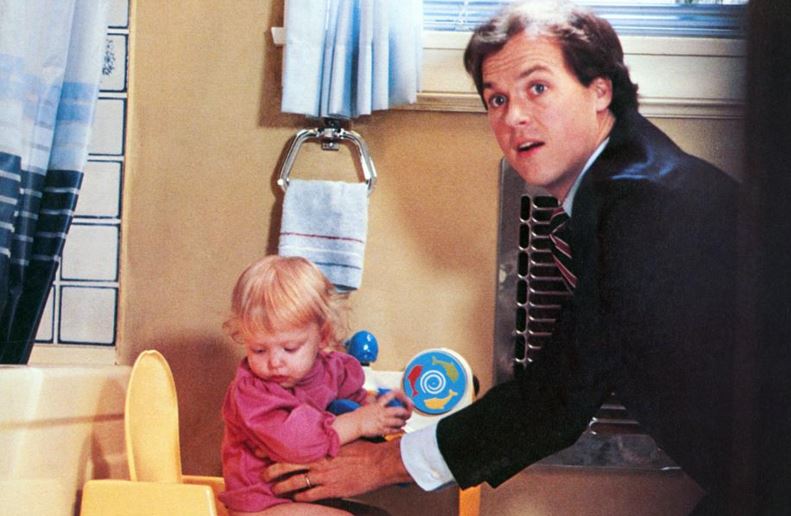 Last week I took all three of my little girls into a supermarket, where another man noticed me pushing a cart around with two kids in it and wearing a third one on my chest in a baby harness. “Superdad!” he called out, with a thumbs-up. I was rather proud of that since being the World’s Best Father is a major life goal of mine. Then a woman saw me and marveled, “Wow, Dad doing the shopping and the babysitting!” While she certainly didn’t intend that as a jab at my manhood, I felt a twinge of defensiveness at the implication that I was doing what used to be disparaged as “women’s work.”

Fathers and mothers through the ages have generally settled into traditionally different roles in the raising of children – and, for biological and cultural reasons, that is as it should be. But as The New York Times’ Frank Bruni pondered in an op-ed last week, fatherhood has changed over recent generations. We are moving beyond the emotionally distant patriarch of an earlier time (who, like the male-bonding sexists of Mad Men, relegated all the child-rearing to the mother) to a new era of the unabashedly caring, hands-on dad. The new fatherhood is “less hidebound, with more elastic definitions of masculinity.” Bruni called his piece “Building a Better Father,” but does being a better father mean that a man necessarily becomes less masculine in the process?

Despite this evolution of fatherhood, the cultural assumption still tends to be that when dads trespass in the mother’s domain, it’s emasculating. Cafemom.com, for example, recently gushed that doting father-of-two Prince William “is totally in the running for being Mr. Mom.” No man wants to be thought of as Mr. Mom.

Bruni, 51, remembers his childhood as a time when there was an impenetrable wall of separation between the roles of mothers and fathers, who expressed affection differently as well. “A mother’s love was supposedly automatic, unconditional,” Bruni wrote. “A father’s love was earned. Mothers nurtured, tending to tears. Fathers judged, prompting them.”

That was my experience too. The mothers of my parents’ generation were the homemakers; the fathers were the financial providers, and they considered that to be the full extent of their paternal responsibility. My dad, God rest his soul, took virtually no part in raising me and my brothers apart from throwing the football with us on Sundays.

By contrast, Bruni notes a Pew Research Center survey which states that men today spend almost three times the number of hours a week with their children as they did half a century ago – and still feel conflicted about not devoting more. He also refers to a new book, Love That Boy by journalist Ron Fournier, who is Bruni’s age. One of the themes of the book is fatherhood “in the here and now.” Fournier lays bare his fatherly feelings and failings in a way that would have been unthinkable in men of his (and my) fathers’ generation. I never witnessed my father wrestling with any fatherly shortcomings. I never saw him cry.

But today, as the proudest father in human history, I have become one of what Bruni calls the new “doters and gushers.” Friends I have bored recently at parties will attest to this. I had lunch the other day with a more sympathetic friend whose two daughters are the same age as my youngest ones. We gushed about our kids and talked about how fatherhood changes a man’s life (for the better, we agreed).

My friend lamented that working long hours for his family’s future means he can’t spend as much time with them as he’d like. This reminded me of Frank Bruni’s prominent examples of fathers today who put family before career: baseball player Adam LaRoche, for example, who walked away from the Chicago White Sox and a $13 million salary because a team exec told him that his son could no longer accompany him to daily practice. Republican Speaker of the U.S. House of Representatives Paul Ryan declared that he would not sacrifice time with his kids for his colleagues.

Is this evolution, this doting and gushing, an indication that today’s fathers are less manly than yesterday’s Mad Men? Of course not. Masculinity should be gauged by a man’s commitment to virtues, not by a pointless tradition of emotional unavailability or a fear of appearing maternal.

Courage and emotional strength are manly virtues, however, so it doesn’t help for a man to be so in touch with his emotions that he becomes quivering jelly when his family needs him to be a rock. But it is crucial that fathers teach their sons and daughters by example that a real man, a good father, is unashamed to be emotionally present in their lives and is a full parenting partner of the mother – not as Mr. Mom, but as Superdad.