14 Facts on Beer and U.S. Presidents 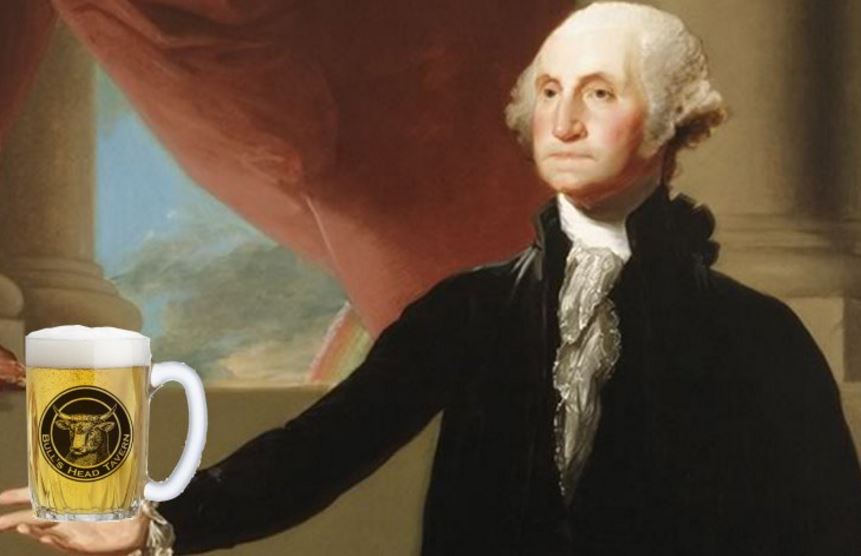 1) George Washington loved beer and had his own recipe.

His favorite style was a porter, but he (or his servants or slaves) also brewed his own “small beer,” a simpler brew with less alcohol. Here is the recipe he used:

“Take a large Siffer [Sifter] full of Bran Hops to your Taste. Boil these 3 hours then strain out 30 Gall[ons] into a cooler put in 3 Gall[ons] Molasses while the Beer is Scalding hot or rather draw the Melasses (sic) into the cooler & St[r]ain the Beer on it while boiling Hot. let this stand till it is little more than Blood warm then put in a quart of Yea[s]t if the Weather is very Cold cover it over with a Blank[et] & let it Work in the Cooler 24 hours then put it into the Cask—leave the bung open till it is almost don[e] Working—Bottle it that day Week it was Brewed.”

2. Franklin Pierce loved beer too much.

Pierce drank lots of beer—and pretty much everything else. He died of cirrhosis of the liver.

3. Thomas Jefferson hired a former British soldier to teach a slave how to brew.

Jefferson too loved his beer. (Are you seeing a theme here?) His wife, Martha, would brew as much as 15 to 20 gallons every few weeks. After Jefferson’s wife died, he brought to Monticello a brewer and former British soldier who had stayed in America after the cessation of hostilities. The brewer taught one of Jefferson’s slaves, Peter Heming, how to brew.

4. Lyndon Johnson was dangerous when he drank Pearl beer.

Johnson loved drinking Pearl beer out of a can.

5. He also liked to drink beer while driving.

6. Grover Cleveland once attempted to cut back to four beers a day–and failed.

Grover Cleveland, as a young attorney working in Buffalo, could predictably be found in the city’s many beer garden’s with cigar in one hand and a tankard of beer in the other (especially during warm summer evenings). According to author Mark Will-Weber, “Big Steve” (Cleveland’s nickname) made a deal with his opponent during their race for district attorney that they would limit their beer intake to four per day during the campaign. Finding the prohibition stringent, however, the men came up with a solution. They upgraded to four full tankards per day. (If political challenges today could only be resolved so easily.)

7. James Garfield was sneaky about his beer drinking.

Garfield once received “criticism” for having a keg of beer on campus. His defense? He claimed it was for “medicinal purposes.”

8. Garfield, whose presidency followed teetotaler Rutherford B. Hayes, did not serve alcohol at the White House. He would, however, occasionally sneak out for beers in the evening, according to diarist Thomas Donaldson.

9. Teddy Roosevelt tried to crack down on beer drinking. It didn’t go well.

Teddy Roosevelt was not a huge fan of beer or taverns. In fact, while serving as police commissioner in New York during the mid-1890s, the progressive Republican led a crackdown on saloons, especially on Sundays. His crusade did not go well, as he ruefully noted in his autobiography. An ordinance that allowed the intake of alcohol with food foiled his efforts: “After two or three months a magistrate was found who decided judicially that seventeen beers and one pretzel made a meal.”

For years leading up to the American Revolution, colonialists who loved good porters, like George Washington and John Adams, had to import it from London. That changed, however, when a Philadelphia brewer named Robert Hare developed a porter recipe that could compete with the breweries in London. By 1774, Hare’s porter was all the rage in the colonies (the crumbling ties to England might have had something to do with Hare’s success, as well). On the Fourth of July in 1788, a huge party was thrown to celebrate the ten states that had ratified the constitution. Ten toasts were made and a blast of cannon fire accompanied each toast—and a majority of toasters were said to have had Mr. Hare’s famed porter in hand.

Lincoln is considered one of America’s greatest presidents; alas, he is one of the few who rarely (if ever) tasted a drop of beer.

12. During the 1787 Constitutional Convention the Framers drank A LOT.

During the hot summer of 1787 when the U.S. Constitution was signed, delegates drank like fraternity brothers at a reunion. According to one receipt from a local tavern, racked up a few days before the document was completed, the 177 delegates drank the following: 54 bottles of Madeira, 60 bottles of claret, 8 bottles of whiskey, 22 bottles of porter, 8 bottles of hard cider, 12 bottles of beer, and 7 bowls of alcoholic punch.

13. Jefferson thought beer was good for human health and spirit.

He once said the following: “Beer, if drunk in moderation, softens the temper, cheers the spirit, and promotes health.”

14. Washington came up with creative drunken names for his dogs.

Washington enjoyed both hunting and beer so much that he named his French hounds after his, er, fondness for spirits. Among the names of his hounds were the following: “Drunkard,” “Tippler,” and “Tipsy.”

Note: A lot of these facts came from Mark Will-Weber’s very cool book: Mint Juleps With Teddy Roosevelt: The Complete History of Presidential Drinking. I highly recommend it to people interested in history or alcohol.

Bonus fact: Ben Franklin, who was not a president, did not really say: “God made beer because he loves us and wants us to be happy.” But it would have been cool if he did.