Who actually is intolerant, violent and wants to suppress speech? 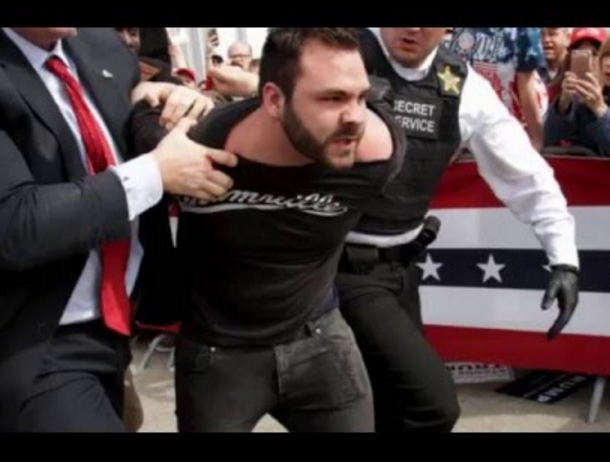 On Friday, March 11, America was treated to the mass disruption of a Donald Trump Rally in Chicago. Based on the celebration by the protesters, the goal was to shut down political speech.

There is no other way to describe the actions of the protesters other than intolerant, violent, and hateful.

And now, from University of California Berkeley, we get video of another violent protest, this one against an event that featured Marc Benioff, CEO and founder of Salesforce.com, and Lars Ulrich, one of the founding members of Metallica.

The op-ed went on to say,

“We are students, administrators and faculty who have come together in defense of vital values.

On March 2 in Zellerbach Hall, during a student-organized event called ‘Front Row,’ Berkeley witnessed a disturbing violation of one of our sacrosanct principles, namely the right to the open and free expression of ideas. A small student group that calls itself the Student Labor Committee, or SLC, decided to use physical violence to attempt to disrupt this event. Though quick and professional action by the police prevented worse from occurring, it was a sickening moment.

As a community, we unambiguously denounce such behavior. We cannot shrug off these acts as ‘the exuberance of youth,’ ‘it’s Berkeley,’ or ‘it’s freedom of speech.’ It is none of these. This is our community and our campus, our place of work and our place of study. Violence has no place here. No matter what cause the disrupters may believe they are serving, it cannot justify the attempt to destroy a fundamental function (arguably the fundamental function) of the university — namely creating an open space for the free exchange of ideas.”

“More than just an attempt to exercise the heckler’s veto, this was a planned, violent, bullying act, with the express purpose of destroying a core activity of the campus.

All groups at UC Berkeley have the right to free expression, but none have the right to prevent others from doing likewise, least of all by using violence. The disruption last week was not an example of protest, it was not the exercise of free speech. We will not compromise our mission to create and disseminate artistic expression, illumination and the evolution of ideas — for it is only through these means that we can better our community and society in general. It is a moral obligation of anyone who cares about the free exchange of ideas, the cornerstone of any democratic society, to condemn such behavior in unambiguous terms. Be it on our performance stages or in our classrooms, we hold true to our principles of the vital exchange of ideas. Most of all, we unequivocally condemn this violence, and we hope everyone in our community will join us in doing so.”

How true. Freedom of speech means tolerating the speech of people with whom you disagree. As the op-ed states, free speech is the “vital exchange of ideas.”

Sadly, the behavior of many of these protesters calls into questions whether or not they actually want free speech.

Whatever one’s political orientation, if we want to keep our centuries-old tradition of free speech alive in America and the West, these sorts of violent, intolerant, and hateful actions cannot be tolerated any longer. They need to be called out for what they are and condemned vigorously.