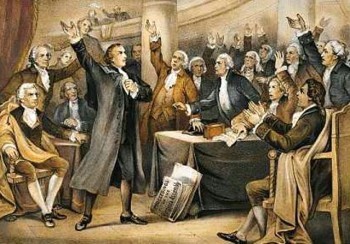 Patrick Henry is a name familiar to many Americans. But let’s be honest, few of us who know of him could offer more than a detail or two about the man.

There is not a lot of detailed biographical information on Henry available online, an irksome fact when you want to write catchy things about someone on the anniversary of a historic speech. So I dusted off a few biographies of the man.

To my astonishment, I found some question around the certitude on whether or not one of America’s most famous orators was even literate.

In fact, biographer John Torrey Morse dedicates an entire chapter to the issue of Henry’s alleged illiteracy. (Chapter II: Was He Illiterate?).

The allegations of illiteracy seem to stem primarily from the following:

For these reasons (and perhaps a few others), Henry’s literacy was called into question by his peers and historians. So what’s the answer?

A thorough review of Henry’s record, Morse concludes, reveals that “the Jeffersonian tradition of Patrick Henry’s illiteracy is, at any rate, far too highly tinted.”

Henry was not only literate, but the letters he wrote that did survive reveal a “real intellectual cultivation,” Morse wrote. In fact, the biographer concluded that the few written documents penned by Henry that survived suggest the great speaker was a stronger writer than many of his peers: “In penmanship, punctuation, spelling, syntax, they are, upon the whole, rather better than the letters of most of the great actors in our Revolution.”