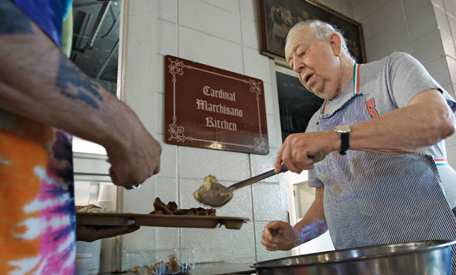 Unsurprisingly, most Americans think of ISIS’ killing of people for refusing to convert to Islam as a case of “religious extremism.”

What is surprising is some of the other things that Americans now label as “religious extremism.”

A story this week in The Atlantic by Jonathan Merritt focuses on the pertinent results of a poll discussed in a new book from Barna Research: Good Faith: Being a Christian When Society Thinks You’re Irrelevant and Extreme. Allowing for the margin of error that’s normal for a relatively small sample, the poll shows that “religious extremism” is a spectrum that popular attitudes seem to keep expanding to include more and more.

Some of the pertinent results from the poll of 1,000 U.S. adults:

As Merritt notes, the view implied in this last statistic “specifically places evangelicals in the crosshairs of public opinion, since proselytizing is one of the key characteristics of that subset of Christianity.” Furthermore, he writes:

“If most Americans would apply the same descriptor to ISIS militiamen and soup kitchen volunteers who believe it is their duty to convert non-believers, something is amiss.”

And it gets worse:

“According to Barna, three-quarters of Americans believe ‘being religiously extreme is a threat to society.’ Which means that many Americans now believe that Christians who advocate for sexual abstinence or value missions work over money constitute, in some way, a social threat.”

One would think that the last sentence of that previous quote speaks for itself. But it doesn’t, because a great many of the people with attitudes like the ones the Barna poll describes don’t see the irony of their position. So Merritt makes the point explicit:

“One of the great ironies of this politically correct age is how those who most champion tolerance are often in such great need of the virtue themselves. Society calls ‘extremist’ those believers they consider to be rigid, narrow-minded, and unaccepting of others.

Carelessly painting such wide swaths with a caustic descriptor is its own form of intolerance. It’s refusing to accept those who are less accepting. It’s coercing someone to convert to your way of thinking to keep them from converting others to their own. It’s marginalizing one group to keep them from shaming some other marginalized group. It contributes to the very problem it’s trying to solve.”

In an era when public civility and tolerance seem to be in ever-shorter supply, that’s worth keeping in mind.