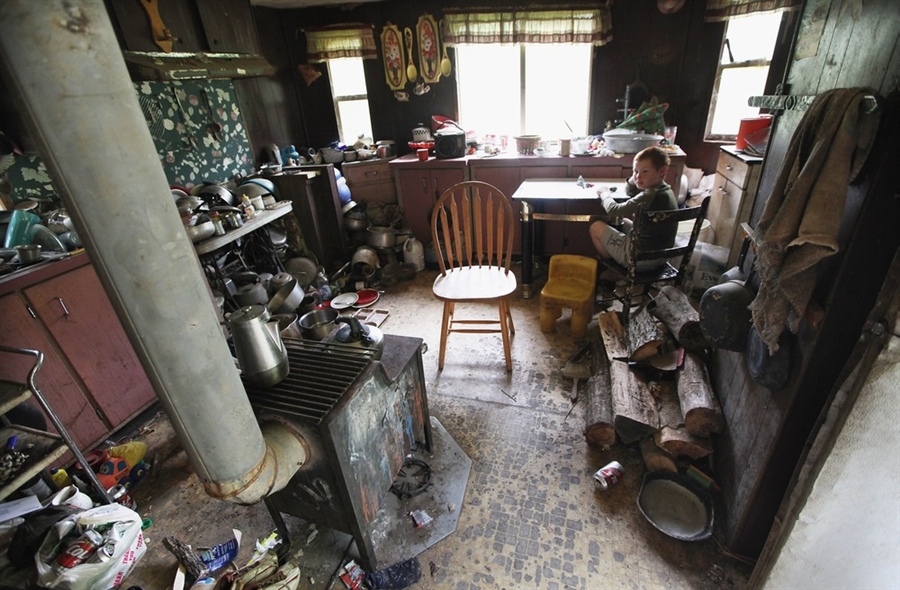 “As it turns out, our deeply racialized view of poverty bears no resemblance to reality. Though it’s true that African Americans are disproportionately likely to live below the poverty line, it is also true that the vast majority of those in poverty are white: 29.8 million people. In fact, there are more white poor than all other poor combined.

Owsley County (Booneville is the county seat) is the epicenter of that poverty. Median income here is less than $20,000. The obesity rate is 50 percent. Life expectancy: 71.4 years, more than seven years below the national average. With 36 percent of its citizens living below the poverty line and 98.5 percent of its population identifying as white, it is the poorest — and one of the whitest — places in America.”

Leonard Pitts is black and so his commentary on poor whites is even more fascinating as it reveals an honest reflection on the issue and a coming to grips with the falseness of the national narrative on poverty. There is a recognition that the dynamic of the conversations about poverty must change, while still acknowledging challenges of race in America.

“There is a remarkable consistency to the way citizens of the poor, white mountain South have been portrayed in popular culture and scholarship. In entertainment, they are narrowly defined as naifs whose very innocence and trusting nature insulates them from the conniving machinations of city folk (think Jed Clampett), as lazy sluggards (think Snuffy Smith), as big, dumb rubes (think Jethro Bodine) or as the personification of perverse evil (think Deliverance). Women’s roles are even more constrained: they tend to be either ancient, sexless crones (think Mammy Yokum) or hyper-sexualized young women (think Daisy Duke).

Get past John-Boy and the rest of The Waltons, and it is difficult to recall a sympathetic portrait of white Southern poverty in mass media. To the contrary, America has always bred a special contempt for the white poor. As far back as 1866, a Boston Daily Advertiser writer opined that ‘time and effort will lead the negro up to intelligent manhood, but I almost doubt if it will be possible to ever lift this “white trash” into respectability.’

In 1957, the Chicago Tribune described an influx of ‘savage,’ ‘vicious,’ ‘depraved’ newcomers from the poor white South under the lurid headline: ‘Girl Reporter Visits Jungles of Hillbillies.’

In 1963, Harry M. Caudill published what is still regarded as a landmark in the study of the poor white South, Night Comes To The Cumberlands. Yet even that book, which takes pains to document how poverty was imposed upon Appalachia by its isolation and the predatory practices of lumbermen and coal magnates, also indicts what the author seems to feel is the native inferiority of the people. Appalachia, writes this ‘defender’ of the region, was settled by the dregs of England, ‘human refuse dumped on a strange shore.’

The thinking goes that the white South — and in particular, the poor white mountain South — is a land of primitives, a land of people who never quite evolved. ‘Our contemporary ancestors,’ one author dubbed them. Another called them ‘yesterday’s people.’

Nor is the image of ‘yesterday’s people’ solely yesterday’s concern. Consider the Hillbilly to English Translation Dictionary. Its cover depicts a woman with pigtails and a missing front tooth, clutching a scraggly bouquet. She is wearing a dingy white wedding dress. She is barefoot and pregnant. This was published in 2010.

There is no national advocacy group to defend the white poor against such libels as this, no analogue of the NAACP or the National Organization for Women to assert their dignity. You may malign them without a whisper of complaint.

The invisibility of white poverty, says Edmund Shelby, editor of the Beattyville Enterprise, is part of the problem. ‘Those of us who are aware of the issues facing Appalachians and those of us who speak out about those issues see that as one [thing] that has kept us in the position that we are in for so long. I think that can be said for a lot of poor populations, because if you can say things about people that dehumanize them, then there’s no need to help them raise themselves up in any way because, after all, using that stereotype, they are incapable.’

That invisibility is ironic. Although the War on Poverty is generally remembered for what it did and did not do for black people in the cities, it was actually Appalachia Lyndon Johnson had in mind when he launched it.”

Leonard Pitts was good to shine some journalistic light on the topic of poor whites. Perhaps now Bernie Sanders will want to walk back his infamous statement at the March 6 Democratic debate.

While whites may not understand what it means to be black in America, many millions of them deeply understand grinding poverty.