How ‘The Simpsons’ Predicted Trump 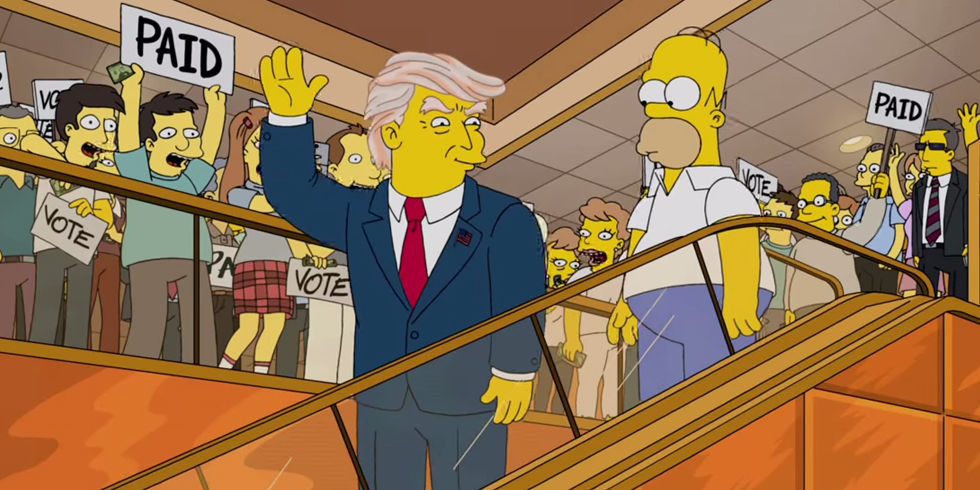 On March 19, 2000, The Simpsons alluded to a future Donald Trump presidency in an episode titled “Bart to the Future.”

“Bart sees his future in a vision where his band plays a gig for popcorn shrimp and Lisa becomes the first ‘straight female’ president of the United States.

In a clip from the episode, Lisa tells her staff, ‘As you know, we’ve inherited quite a budget crunch from President Trump.’”

That’s it from the show itself. At the time, some viewers seem to have found the idea of Trump as President a bit over-the-top. I know I did. That may have been the point, however. Thus Newsday:

“Simpsons Dan Greaney recently told The Hollywood Reporter, ‘It was a warning to America.’

He added, ‘And that just seemed like the logical last stop before hitting bottom. It was pitched because it was consistent with the vision of America going insane.’”

“The Simpsons has always kind of embraced the over the top side of American culture … and [Trump] is just the fulfillment of that.”

As it turns out, the comedy was prophetic. A good many Americans today, Republican as well as Democrat, view Trump’s rise as the “logical last stop” for America before “hitting bottom.”

The serious question worth considering is whether Trump’s campaign success is evidence of America’s descent into “insanity,” as people like Greaney think, or whether it’s somewhat inevitable in a culture that celebrates… well, celebrities. A real-estate mogul such as Trump doesn’t get to be a celebrity just by how he gains his wealth, but by making himself a brand—in this case, through his style and bravado. It would seem that the celebrity brand is a good part of what’s driving his political appeal. That, and some real grievances Trump is addressing in his campaign.

What that says about America, I leave to the reader to decide.