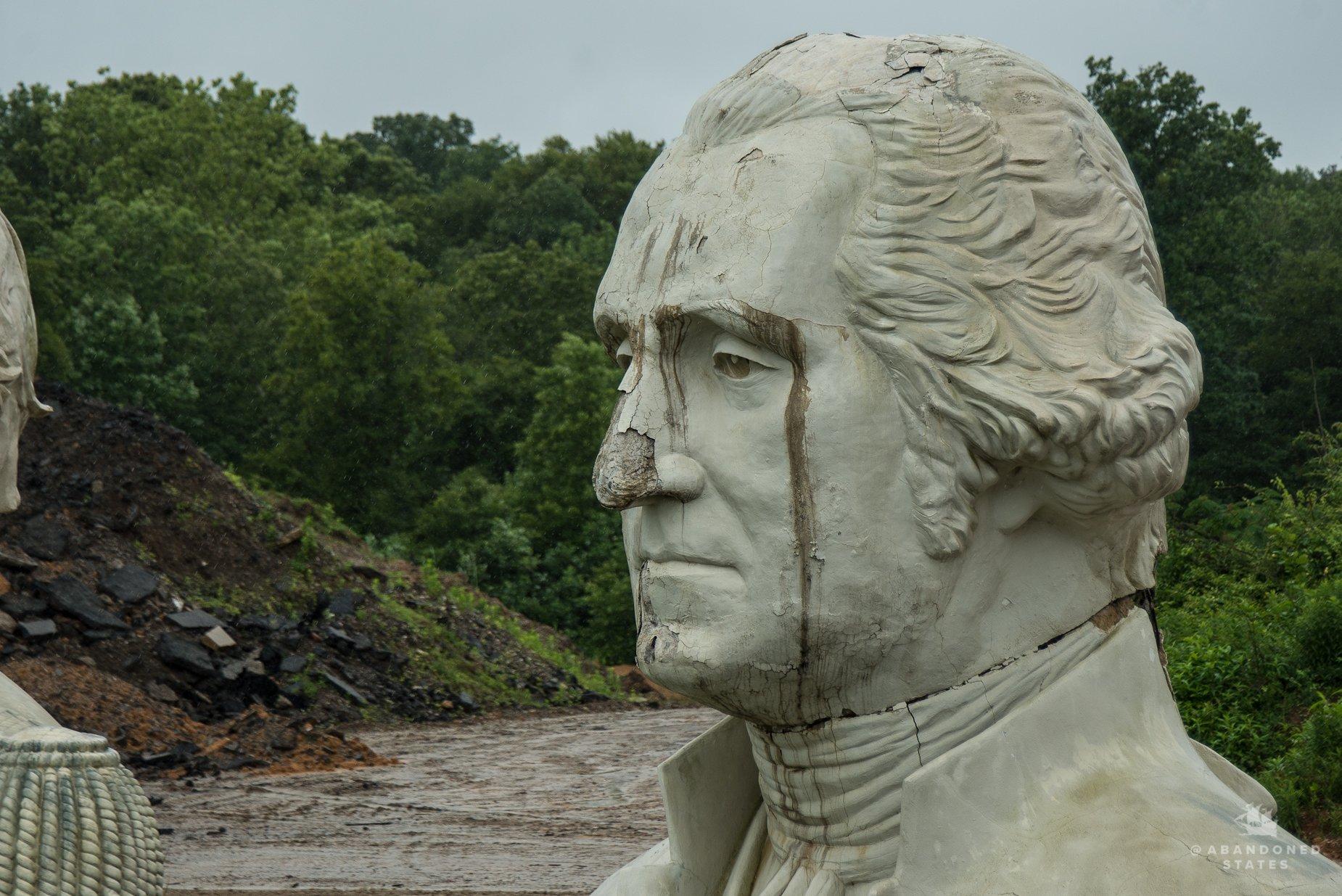 On Presidents’ Day, in the week that the Republican presidential candidates were crisscrossing my home state of South Carolina, I stumbled across an essay in a magazine that tells how you can find the gigantic busts of forty-three American presidents standing broken and decaying in a farmer’s field in Virginia. The essay is full of dramatic pictures. Like a prophetic parody of Mount Rushmore, the back of Abraham Lincoln’s head has caved in, and the weather has stained George Washington’s face as if he is weeping for his nation.

The busts are all that remains of Presidents Park, an open-air museum where visitors could once walk among the monuments of presidents. The park opened in 2004 after a local landowner, Everette Newman, got together with Houston sculptor David Adickes. Their tourist attraction, which cost about $10 million to create, went into foreclosure six years later. They couldn’t bring themselves to break the sculptures, so a local farmer did his best to transport them to his property. Many were damaged in the process and now stand forlorn, weathered, and wounded in the tall grass.

Faced in 2016 with a disappointing array of presidential candidates who eerily reflect the decadence, arrogance, and ignorance of our electorate, the essay made for depressing reading on Presidents’ Day during the overheated run up to the South Carolina primary. Seeing the battered and weather-beaten monuments to America’s greatness, I could not help but think of Shelley’s Ozymandias:

I met a traveller from an antique land,

Who said—“Two vast and trunkless legs of stone

Half sunk a shattered visage lies, whose frown,

And wrinkled lip, and sneer of cold command,

Tell that its sculptor well those passions read

Which yet survive, stamped on these lifeless things,

The hand that mocked them, and the heart that fed;

And on the pedestal, these words appear:

My name is Ozymandias, King of Kings;

Look on my Works, ye Mighty, and despair!

Nothing beside remains. Round the decay

Of that colossal Wreck, boundless and bare

The lone and level sands stretch far away.”

Meanwhile, the candidates around me, eager Ozymandiases all, were spending obscene amounts of money advertising how mendacious, cunning, vulgar, untrustworthy, and incompetent their opponents were, while bragging about their billions or praying piously as they buckled up their Bibles and praised Jeezus to try to please us. Before long the other two rascals will come creeping into the Carolinas, like two aged Gollums searching for their precious.

What are we to make of these colossal wrecks who would be the King of Kings, all made unattractive by their attraction to power: antique travelers through the Manhattan marketplace of greed, the grubbiness of graft, a priapic presidency, and the cosseted closets of the champagne socialists? Alas, it is only the two sons of immigrants who seem to present the best chance….

We can only look on them and despair, not only for their own frailty, but for ours, because we get the leaders we deserve. The presidential candidates are us. Are they corrupt, greedy and base? We are too. Do we shrug and yawn at their adulteries and not-so-secret affairs? We are open about ours. Do we dismiss their hidden violence, their cutthroat ways hiding and sliding behind their smooth exteriors? We do that. Do we admire their boasting about themselves and their roasting of their foes? We like that. Do we believe their strutting ways, their pious phrases, their self-righteous airs, and their lofty promises? We believe all the lies we tell ourselves.

The gigantic presidential heads in the field in Virginia are a stark reminder that all the presidents and all the president’s men are Ozymandias and so are we. Our nation, like the abandoned presidents’ busts, is broken, battered, and weather-beaten. Why? Because we did not preserve what is best in a beautiful memorial park. We turned it into a tourist attraction with tickets for sale, and when the amusement park went bust we abandoned it and moved on to a new entertainment, putting the past out to pasture.

The parable of the president’s park is this: that if we do not preserve what is best from the past we should not be surprised if the future is even worse. For the better part of the past half-century we have demolished and distorted the morality, the law, the principles, and the faith of our fathers.

Now the past being abandoned and broken, the present is our curse.