If We’re All So Connected, Why are Our Kids so Lonely? 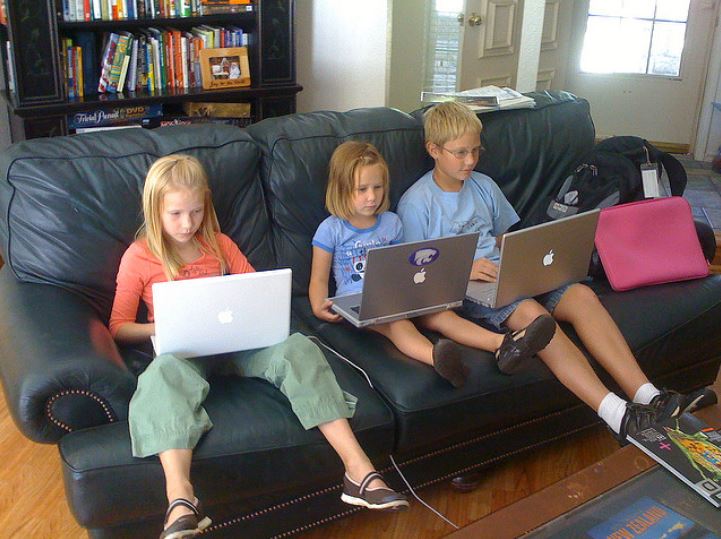 Heading out on an overnight school trip, my daughter spent 90 minutes each way on the bus with her classmates. Before the trip, the school laid out the electronic use policy—students would be allowed to use iPhones and iPads on the drive to and from their retreat but not during their stay. A few parents questioned the need for devices at all—can’t they talk to each other for 90 minutes?—but the policy stood. I sent my daughter off with a few books, a journal, and pens.

When she returned, the review was glowing: the place where they stayed was awesome, she loved having roommates (“Maybe we can look at some sleep-away camps this summer?”), the food was yummy, and the classes were fun. Everything was great—except for the bus ride. “I was one of only a few kids who didn’t have an iPhone or iPad,” she told me. I shrugged my shoulders as if to say, “That’s OK.” But clearly it wasn’t. “It’s lonely when everyone else is on a device except you,” came her serious reply.

The exchange highlighted an important experience: the place of childhood loneliness in a world where people are seemingly ever more connected. Our devices offer opportunities for constant exchanges with which we can fill nearly every stray minute in a day. It’s worth asking whether and how this is any different—for a child at least—than having his or her nose constantly buried in a book and hearing nothing else going on around them. I can ask my daughter five times how her school day was, but if she is reading the latest Rick Riordan book, I’ll never get an answer. Books are closed worlds, and the very best ones offer an alternative place with mind-bending and blissful alternative dimensions.

But our children are spending an increasing amount of time staring at screens. And a new study released in January found that children today are struggling with “loneliness or deep levels of unhappiness” as a result of the time they spend on the Internet. The experience of loneliness has always been a part of childhood, of course. But technology, which in some cases can connect children to others virtually, clearly also has the potential to aggravate and introduce new sources of loneliness (cyberbullying, catfishing).

ChildLine, the agency that conducted the survey and runs both an online and phone hotline for children in the UK, said the kinds of worries that young people face and the way they talk about these problems “have dramatically changed” since ChildLine was launched in 1986. Mairead Monds, ChildLine’s service manager in Northern Ireland, said: “It is clear that the pressure to keep up with friends and have the perfect life online is adding to the sadness that many young people feel on a daily basis.”

“Unlike a generation ago, when being excluded from a social event might have meant moping around the house for the weekend, today’s teens have to watch their peers post dozens of party photos on Facebook or Instagram, seeing all the fun they’ve missed in graphic detail, and probably heightening any feelings of isolation and depression,” said Melissa Schorr, a young adult author whose most recent book, Identity Crisis, deals with some of these issues.

Where can we go to understand the loneliness of childhood? Loneliness is a central theme of Francis Hodgson Burnett’s classic, The Secret Garden. The book is a hymn to lonely children and lonely places, lost families and sparse friendships. In this most unhopeful of themes, Burnett gives children the brightest and most hopeful of alternatives, a garden, itself transformed by death and the loneliness of loss. Here is a place where the roots grow deep, and the illusions of what one is and what one has lost fade behind the real sights and scents of life allowed to flourish within.

The loneliness that Burnett’s main character, Mary Lennox, endures is a solitude that is imposed by others, a loneliness that grows when others can (or choose) to neither see nor hear her. “I’m lonely,” Mary tells Ben Weatherstaff, the gardener, once she identifies with the loneliness of a robin in the garden. In that famous chapter, when Mary first walks into the enchanting locked garden, she begins to understand the difference between stillness and loneliness:

Everything was strange and silent and she seemed to be hundreds of miles away from any one, but somehow she did not feel lonely at all.  All that troubled her was her wish that she know whether all the roses were dead, or if perhaps some of them had lived and might put out leaves and buds as the weather got warmer. She did not want it to be a quiet dead garden. If it were a quiet alive garden, how wonderful it would be . . .

The loneliness of Burnett’s Garden is one that must be cultivated with human touch and longing. In a moving tribute to Burnett, Gretchen Holbrook Gerzina wrote:

The image of the triumphant gardener wrestling with life itself and emerging victorious has inspired legions of girls on both sides of the Atlantic to believe that they could discover secret gardens and rejuvenate and order the chaos of adolescent loneliness.

Technology will be a part of most children’s lives, in useful (and useless) ways, but teaching children how to step away from their screens, and gravitate toward what can be felt and cultivated in the real world—where they might discover their own secret gardens—will reveal to them the difference between the beauty of stillness and the loneliness of isolation.