This great inventor only had 5 years of formal schooling 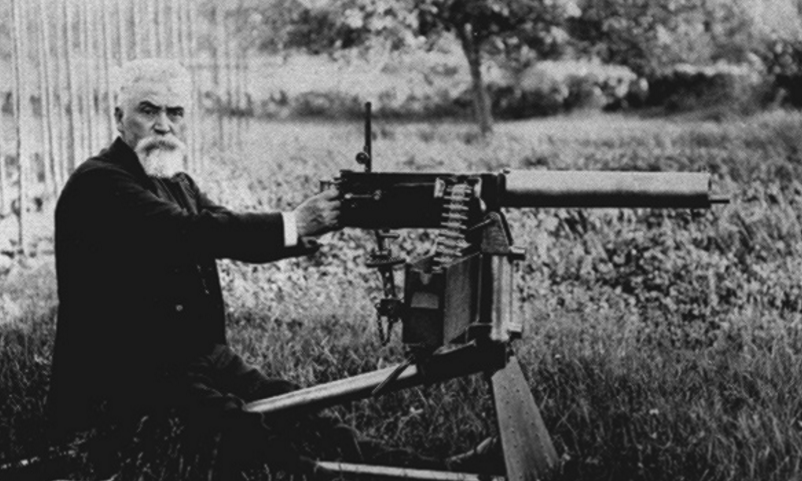 If you’re a military-history buff, you’ve probably heard the name Hiram Maxim. If you haven’t, he is credited with inventing the Maxim machine gun in 1884, which substantially changed warfare with its ability to fire 600 rounds per minute.

Now, the ingenuity of the Maxim machine gun reveals that odd contradiction of progress. On one hand, the invention was an incredible leap forward for technology. On the other hand, man could now kill even more men in less time. This simple fact would become clear thirty years after Maxim’s invention when modified and improved versions of his weapon would decimate men by the thousands and even tens of thousands in single days of pitched battle in World War I.

In To Hell and Back, Audie Murphy, America’s most decorated soldier in World War II, recalls a conversation about the machine gun with his grandfather who fought in World War I against the Germans:

“’But you knowed where they were,’ I said.

From the shade of the tree, he gazed over the cotton fields.

‘Of course, I knowed where they was,’ he said. ‘Any ijiot would have. It was still early mornin’; and when they crawled through the field, they shook the dew off the wheat. So every blessed one of ‘em left a dark streak behind. That give their positions away.’

‘What would you done? I lined up my sights on the machine gun and waited.’

‘Yeah. It’s the devil’s own weapon. When they got to the edge of the patch, I could see ‘em plain. There was nothin’ to it. I just pulled the trigger and let ‘em have it.’

Fascinated, I glanced at the hands again, picking out the trigger finger. ‘You killed ‘em?’

“It’s the devil’s own weapon.” That says a lot, especially coming from a man who operated one. Again, technological progress doesn’t always bring out the best in humanity.

Another example of the mixed blessings of technology would be the aircraft. It’s a beautiful invention that has given many benefits to mankind. It’s also been used to destroy cities and towns the world over. Why bring it up? Because interestingly enough and probably far less known was Hiram Maxim’s role in developing “heavier-than-air flight”. Here’s a picture of his test aircraft built in the 1890s:

It never technically flew, but instead was used to test Maxim’s belief that heavier-than-air flight was possible if the right engine was developed. Up front, there is a steam engine (yes, a steam engine) powering his test aircraft. It weighed 8,000 lbs. and had pusher-propellers nearly 18-feet in diameter.

Here is how journalist H.J.W. Dam described his ride on the flying machine:

“A rope was pulled, the machine shot forward like a railway train, and, with the big wheels whirling, the steam hissing, and the waste pipes puffing and gurgling, flew over the eighteen hundred feet of track in much less time than it takes to tell it.”

These days, one would expect that Maxim surely must have spent many, many years in formal education with degrees from a variety of prominent institutions. Alas, from The Road to Kitty Hawk, we learn that Maxim had less than five years of formal education. The book describes his learning as follows:

“Maxim had been interested in aeronautics since his boyhood in Maine, where he was born in 1840. When Hiram was 16, his mechanically minded father designed an ingenious two-rotor helicopter, but never attempted to build it – there being no engines light and strong enough to power such a craft. Not long afterward, with less than five years of formal schooling to his credit, young Maxim struck out on his own. Traveling the eastern United States and Canada, he found odd jobs as a carriage painter, cabinetmaker, mechanic, or whatever happened along. In his spare time he studied science and engineering – and dreamed up practical jokes. Once he put phosphorous in a friend’s hair oil; when the young man went out walking with his girl, his hair glowed in the dark.

At the age of 24, Maxim signed on as an apprentice at his uncle’s engineering works in Fitchburg, Massachusetts. While there, he gained impressive skills in draftsmanship, wood turning, brass finishing and coppersmithing…

In the early 1870s Maxim moved to New York, where he became chief engineer for one of the nation’s first electric utilities. Toward the end of the decade he invented a machine gun and showed it to the United States War and Navy Departments; both agencies found the gun ingenious but impractical, and turned it down. But when Maxim made a business trip to London in 1881, he found the British War Office considerably more interested in his ideas … In 1884 he perfected the 600-rounds-per-minute Maxim machine gun, a devastating weapon that made him rich and famous.”

It’s a fascinating account to keep in mind as the debate about formal schooling continues to heat up in America. Here is a man who accomplished much in the world of technology and engineering, yet who had little formal schooling. It seems that his success was the mixed result of innate desire, the influence of his father and relatives, apprenticeships, work experience, and a continued desire to learn on his own.

One wonders how Hiram Maxim would fare in modern America’s education system.