The Few, the Proud… the Educated 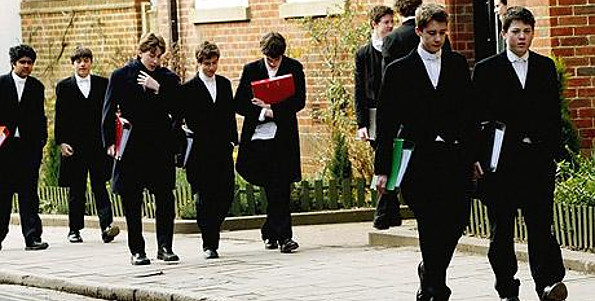 It is often said that the measure of a civilization is how it treats its weakest members.

But when it comes to education, historically, the opposite is true: one can often judge a civilization’s staying power by its most highly-educated members.

In Education and Culture in the Barbarian West, historian Pierre Riché notes that classical culture in Ancient Rome had always been “the privilege of the aristocracy.” Those who had the means to receive the best education were groomed for positions of public administration, and had a special responsibility to preserve and hand on the culture. Thus, Riché notes that ?as goes the aristocracy, so goes the culture:

“The fate of this isolated, worldly culture depended on the existence of the aristocratic class. Should a political crisis test this social group, classical culture could very well disappear.”

And indeed, it was the breakup of the Roman aristocracy in the decades following the fall of the empire that helped plunge the West into what is called the “Dark Ages.”

At the beginning of the 19th century, Alexis de Tocqueville provided America a valuable reminder of the “aristocratic” character of education. In Democracy in America (1835) he wrote of our still-young country:

In the following years, however, America focused its efforts on extending education’s reach rather than its depth.

Horace Mann (1796-1859) is known as the “Father of American Public Education.” The Common School Movement he led in Massachusetts shaped what we now know as the U.S. public education system. Education historian Lawrence Cremin accurately captured the primary intention of this Movement:

“Throughout [Mann] was concerned with the greatest general proficiency of average students. Thus it was never the remarkable progress of a few which captured his attention but, rather, the more general progress of all.”

Undoubtedly, many of us have benefitted from the more egalitarian thrust of American education. We’ve been able to attend school for more years than would have been available to us in past ages, and have thereby enjoyed a greater variety of career options.

But at the same time, I fear this egalitarianism has been costly for America. The increase in students who partake of higher education has been inversely proportional to the quality of that education. Those who possess what has traditionally been thought of as an “education” are an endangered species, and with the passage of each generation, fewer of them are left who can pass that education on to others. Today, what we refer to as our “educated elite” usually consists of those who possess the façade of education—years of schooling, degrees, institutional prestige—but who often lack the substance. As a result of all this, America has a weakened ability to both preserve and transmit the Western culture upon which it was founded.

I will leave you with a final warning from professor Allan Bloom in The Closing of the American Mind:

“Most students will be content with what our present considers relevant; others will have a spirit of enthusiasm that subsides as family and ambition provide them with other objects of interest; a small number will spend their lives in an effort to be autonomous. It is for these last, especially, that liberal education exists. They become the models for the use of the noblest human faculties and hence are benefactors to all of us, more for what they are than for what they do. Without their presence (and, one should add, with their being respectable), no society—no matter how rich or comfortable, no matter how technically adept or full of tender sentiments—can be called civilized.”