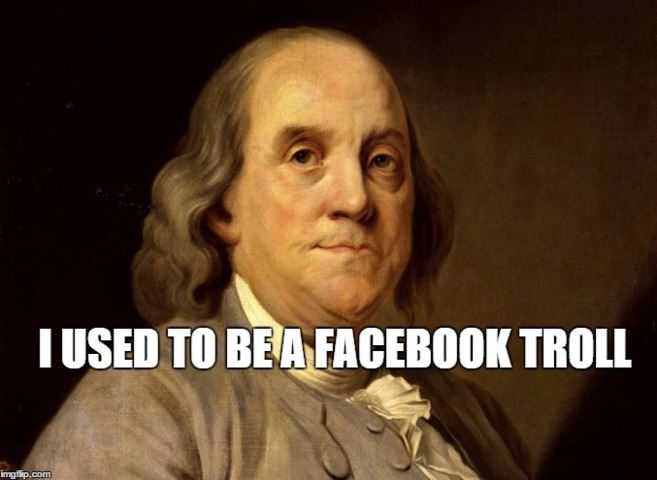 Benjamin Franklin’s famed Autobiography portrays a bright, talented young man, eager to be a success, but with a touch of mischief coursing through his veins. Reading between the lines, one can almost picture the spirited young Franklin as the equivalent of a modern-day Facebook troll.

But something happened to Franklin in his late teens that changed all that. Give up debate he did not; rather, he stumbled upon a method of argumentation which enabled him to strengthen his own arguments while casting doubt on those of others. Here are three ways in which he did this:

1. He Studied the Socratic Method

While in his late teens, Ben Franklin began reading an English grammar which introduced him to the elements of the Socratic method of argument. After learning these principles, Franklin read The Memorable Thoughts of Socrates by Xenophon, which gave him practical examples of how Socrates conducted his arguments. By following these examples, Franklin noted that he “grew very artful and expert in drawing people, even of superior knowledge, into concessions, the consequences of which they did not foresee, entangling them in difficulties out of which they could not extricate themselves, and so obtaining victories that neither myself nor my cause always deserved.”

Rather than practice a “my way or the highway” attitude while in debate, Franklin instead used a gentle tone which never assumed complete certainty of an idea. By avoiding words such as “certainly” and “undoubtedly,” Franklin avoided coming across as arrogant and thus was able to better win the other side to his way of thinking.

3. He Sought to Learn

According to Franklin, “the chief ends of conversation are to inform or to be informed, to please or to persuade.” By taking the form of an inquiring individual whose desire was to learn rather than force people to accept his viewpoint, Franklin disarmed his listener and enabled his own knowledge and understanding to grow.

Many Americans are frustrated with the tone and tenor of today’s discourse. Would public discourse be more civil and worthwhile if we took Franklin’s debate methods to heart?