Are Thank-You Notes Becoming a Thing of the Past? 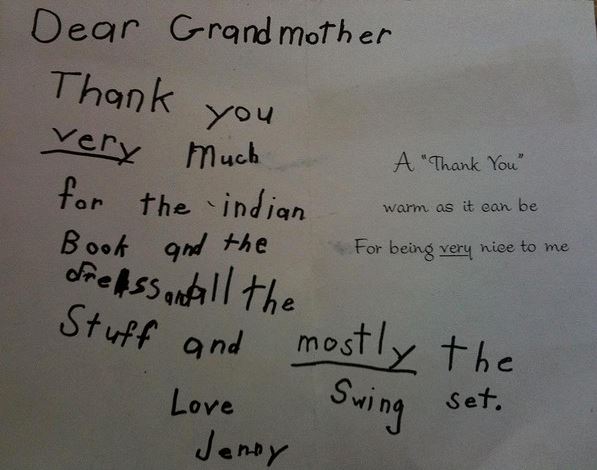 Several years ago, my grandmother received a note from one of my young cousins which made her cry. If I recall correctly, the tears were of delight rather than sadness, for the note graciously thanked her for a trifle which many would have normally overlooked.

‘Experts’ had apparently conducted some form of survey and concluded that for the first time, more of us would be sending thank-yous via email than on paper.

Can this be true? I fear it can. It is so much more convenient to tap out a few words on a smartphone and ping off a quick email. Perhaps some people will even descend so low as to post a general ‘guys, thanks for the stash’ message on Twitter. But since when did convenience have anything to do with politeness and consideration for others?

Quentin Letts goes on to relate how when he was a child in the 1960s, writing thank yous was a Christmas Day ritual:

“There was an expectation that these would be neat, grammatical and long enough to make it over the page. If we could find a way of starting them with something other than ‘thank you very much for the present’, so much the better.

…
Was it a chore to write these letters? It may have seemed so at the time, and my own children now certainly have to be reminded to do their letters.

However, I can now see that my parents were teaching us a good habit, one I hope I have maintained.”

In spite of busy schedules and the increasingly casual nature of society, is it still important to train children to purposefully express gratitude for what they have been given? In a small way, might such an act encourage the revival of courtesy, politeness, and respect which many of today’s young people seem to have lost for their elders?

“I should be ungrateful then, if I did not take every Opportunity of expressing my Gratitude….” – Benjamin Franklin, 1735