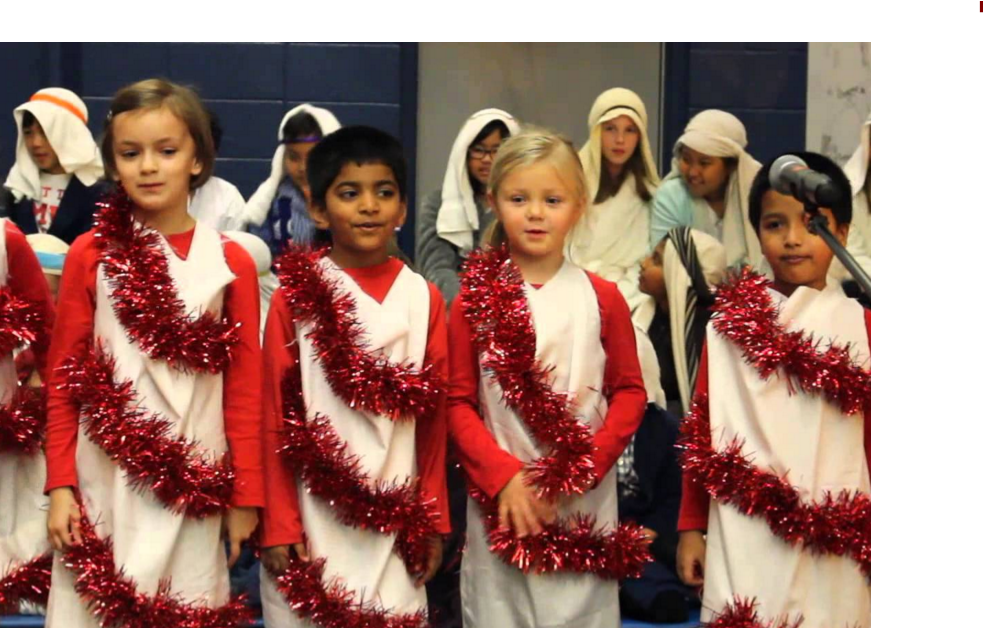 Two stories are making national news. The first comes out of Virginia and the second takes place in Minnesota.

In Virginia, a Riverheads High School world geography class assignment had “students complete an assignment that involved practicing calligraphy and writing a Muslim statement of faith, also known as the shahada, which translates as: ‘There is no god but Allah, and Muhammad is the messenger of Allah.’” Here’s part of the assignment:

At this point, the backlash has been so fierce that “every single school in the county” has been closed as a “safety precaution.”

In Minnesota, a Blaine High School teacher decided to include a “song about Ramadan performed in Arabic” at the school’s holiday concert. That song also included the phrase “Allahu Akbar” – translated as “God is great.”

According to CBS Minnesota:

“In a statement, the district said that they have students from many different backgrounds and cultures, and they promote equal opportunities for all students.

‘Songs are not performed in a worship setting or to promote religion,’ the district’s statement said. ‘but rather in [an] educational setting where students are learning and performing music.’

A spokesman for the district said the Arabic song will be sung during an audience participation portion of the concert.

During that time, a Jewish song and Christian songs, such as ‘Away in the Manger’ and ‘Silent Night,’ will be sung as well. A hallelujah chorus will also be sung near the end of the program.

While the Ramadan song mentions brotherhood and peace, the district says that any student who doesn’t feel comfortable singing it doesn’t have to. Their grade will not be affected.”

First of all, if you’re familiar with people’s religious beliefs, it’s not a surprise that parents and students of differing beliefs would be upset by a school asking either them or their children to either write something or say something that they might interpret as swearing loyalty to another religion. It’s a reasonable position to take.

That said, many of those same parents in Minnesota who are upset by a song that includes the ‘Allahu Akbar’ chant probably turned a blind eye to the fact that Christian and Jewish worship songs were being sung. While “Silent Night” is a very traditional Christmas song in the West, it is also a very Christian song with a declaration that Jesus Christ is the “Son of God”, “Lord”, and “Savior”:

Not long ago, American public schools were largely Christian in a watered-down, Protestant kind of way. It was believed that the nation was a Christian nation (not government) and therefore it was perfectly acceptable for local education to reinforce the culture. A little further back in time, before Blaine Amendments swept the nation, local schools were supported by local taxes and were often filled with students of specific Christian denominations as well as ethnicities. The teachings in the schools often reflected both the desire to form Americans and to maintain religious and ethnic roots.

“Almighty God, we acknowledge our dependence upon Thee, and we beg Thy blessings upon us, our parents, our teachers and our Country.”

The second landmark decision occurred in Abington School District v. Schempp. In that case, the Supreme Court ruled that,

“…no state law or school board may require that passages from the Bible be read or that the Lord’s Prayer be recited in the public schools of a State at the beginning of each school day — even if individual students may be excused from attending or participating in such exercises upon written request of their parents.”

Yes, American schools used to be very Christian. And while the fumes of that legacy still linger, the country has largely moved on. Nonetheless, even though Christianity has largely been purged from public schools, the fact is schools are still pushing certain values. There is no value-neutral education.

In the examples from today about schools attempting to incorporate Islam into traditionally Christian holiday celebrations, we see a set of values – tolerance or universalism – being taught to students. While perhaps not stated, the lesson to students in the attempt to mix Islam, Judaism, Christianity, and who knows what else into a holiday concert is that they are all equal. But clearly, the adherents of the different faiths would argue otherwise. Simply purging religion from schools does not mean that a certain set of values or a worldview isn’t being taught.

The big question is, what is the just way to move forward?

If education is not neutral, but government is funding it, do we need to rethink the rights of the government, taxpayers, and parents? It seems rather unjust to take tax dollars from the public to teach a certain set of values in government operated schools. Not all taxpayers or parents will agree with what is being taught. On the other hand, the reason the schools exist in the first place was always to push a certain set of values.

Can a compromise through school choice be had? Is it reasonable for the government to want to make sure that all children get a basic education and to provide funding for it, but to allow parents to use that funding to find the schools that best educate their children so while also in harmony with their values? Or, to be truly fair, do we have to restore the burden of education on the parents?

As the country becomes more diverse, this issue will only become more contentious. If we want a peaceful, stable society in the long-term, we might have to shift our paradigm.