What American Students Learned about the Pilgrims in 1913 vs. Today 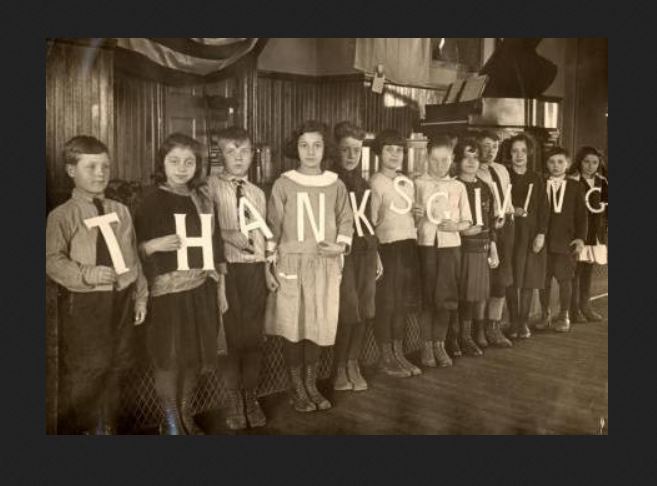 I was reminded that Thanksgiving is fast approaching when I drove by a local school the other day and saw children leaving the building wearing Pilgrim and Indian hats. This morning I got to thinking: the story of the Pilgrims’ arrival in America is quite a common lesson in the early elementary classroom, but is it glossed over in more advanced grades? An examination of the well-known 2014 AP History textbook America’s History suggests it is. As shown in the picture below, only 2 paragraphs of this 1,000+ page textbook are devoted to the Pilgrims.

But have high school history textbooks always minimized the story of the Pilgrims? Not according to the 1913 textbook once used by Texas high schools. It devotes 3+ pages to the Pilgrims, taking care to expound on the hardships they endured and the government they formed, recognizing that such lessons were a crucial component in the founding of America. Consider these three examples from the text:

The Character of the Pilgrims:

“The experience of the first winter is important chiefly in showing the temper of these first colonists. Poor housing, inadequate and unwholesome food, and the lack of sufficient clothing for a New England winter produced sickness. Governor Carver and about fifty other members of the colony died. Ordinary men would have given up in despair, but there was no weakening on the part of these zealous and hardy Puritans. They preferred even the hardships that bereft them of friends for a time to the restraints that denied them their liberties.”

The Importance of Private Property, Religion, and Local Government:

“[I]n 1624, in order to avoid actual starvation, each man was given one acre of land for his exclusive use, upon condition, however, that his holding should return to the community at the end of the seven years. It is important to note that these parcels of land were clustered around the town, because of danger from the Indians and convenience to the church. This custom proved afterward one of the factors in developing the distinctive form of local government in New England, and eventually in giving color to civic institutions in America.”

The Formation of Representative Government:

“In matters of government, Plymouth was from the beginning very democratic. A primary assembly chose the governor and his assistants until it became inconvenient for the voters of the new settlements to attend en masse. When this condition arose, in 1638, the representative system was adopted, perhaps under the influence of the system already in vogue in the Massachusetts colony. The general court thus established gradually acquired the right to make laws as well as to administer them, but the freemen continued to vote in local assemblies upon all matters of purely local interest.”

As the 1913 text demonstrates, the coming of the Pilgrims laid important foundations for America’s future government, grit, and lifestyle. Do they deserve more than two paragraphs in today’s history textbooks?