Tradition! “Fiddler on the Roof” Gets it Wrong 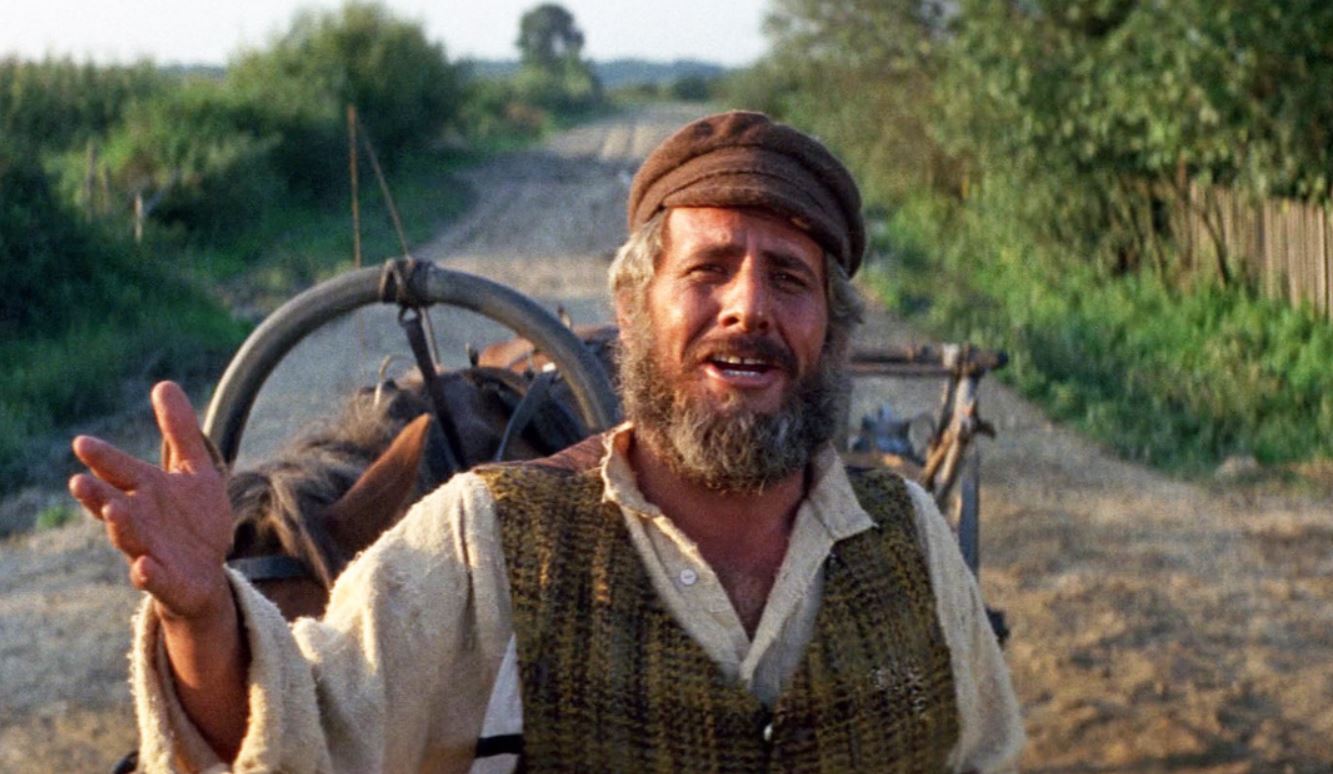 It is hard not to have seen the 1971 film adaptation of Fiddler on the Roof or a stage performance of the play. It is a staple in high school drama clubs across the United States and the world. Many communities have a local playhouse that has at one time or another put on a production of this recurrent musical. It was based on the short story, “Tevye and his Daughters” by Sholem Aleichem. First produced on Broadway with Zero Mostel as the lovable Russian Jewish village milkman, Tevye, Fiddler on the Roof is one of the most popular modern musicals.

But at the risk of seeming the spoilsport, I must confess that I dislike Fiddler on the Roof. Yes, I agree that the songs are cute and memorable and that it is wholesome and family-friendly entertainment. But as a story about tradition and the melancholy of cultural demise, it is vastly overrated.

I say this as a Jew who is very proud of my tradition. I believe Fiddler on the Roof does a great disservice to the greatness of Torah-based Judaism as a way of life. More than that, it sends the wrong message about what tradition actually means and why for all people of the world traditions “keep our balance.” And yet, the opening number, “Tradition!” is so iconic that when many people think of tradition—particularly Jewish tradition—they think of Fiddler on the Roof.

The play’s major flaw is that it mistakes tradition for habit, conformity, and comfort. Real tradition is about a life of quality, which necessitates a devotion to high precepts. As Michael Oakeshott has explained in his famous essay on political education, “What has to be learned is not an abstract idea, or a set of tricks, not even a ritual, but a concrete coherent manner of living in all its intricateness.” That is not what we see of tradition in Fiddler on the Roof. What we see are just tricks and rituals.

In the prologue, Tevye tells the audience: “Because of our traditions, we’ve kept our balance for many, many years. Here in Anatevka, we have traditions for everything: how to sleep, how to eat, how to work, how to wear clothes. For instance, we always keep our heads covered and always wear a little prayer shawl. This shows our constant devotion to God. You may ask, how did this tradition get started? I’ll tell you. I don’t know. But it’s a tradition. And because of our traditions, every one of us knows who he is and what God expects him to do.”

But observant Jews certainly do know how their rituals got started. They have very specific origins and purposes. For example, the commandment Tevye mentions for Jewish men to wear prayer shawls with strings attached to the corners, or tzitzit, as they are called in Hebrew, derives from Numbers 15:37, which says, “You will put fringes on the corners of your garments.” And then in Numbers 15:39, the purpose is revealed: “You will see it and remember all the commandments.” It is a reminder to live a holy life. There is no way a pious Jew in those Russian villages would not have been aware of the origin and purpose of one of the most basic holy commandments.

In Anatevka, the villagers seem to be unaware and unconcerned about why they adhere to their traditions. They just follow them as a matter of convention. This was not the way shtetl life really was. Life involved a deep relationship with God, not as a memory of the distant ancestral past, nor as an invisible spirit in the sky. It was, rather, as if God was standing right there beside them, speaking to them, encouraging them, wanting to be worshipped, wanting to be loved and wanting to be feared. The late socialist scholar Irving Howe understood it far better than Tevye. In his book, World of Our Fathers, he explains:

“Yiddish culture was a culture of speech, and its God a God who spoke. He was a plebian God, perhaps immanent but hardly transcendent. Towards Him the Jews could feel a peculiar sense of intimacy: had they not suffered enough in His behalf? In prayer His name could not be spoken, yet in or out of prayer he could always be spoken to. Because the east European Jew felt so close to God he could complain to him freely, and complain about Him too. The relation between God and man was social, intimate, critical, seeming at times to follow like a series of rationalistic deductions from the premise of the Chosen People.”

We are used to thinking of tradition as a source of comfort. That is how Tevye sees it and it is why audiences sympathize with him over the destruction of the cozy world in which he does not have to think but just act. But tradition is not meant to make us comfortable. It is meant to guide us towards a meaningful existence, no matter how difficult. Observance of tradition is a constant struggle. If it were easy, we as conservatives would not have to worry about its collapse from within.

Defenders of Fiddler on the Roof might counter that the struggle to hold on to traditions is the entire point of the show. It is true that the fiddler is indeed a metaphor for that theme. The fiddler, as Tevye says, is “trying to scratch out a pleasant, simple tune without breaking his neck.” But Tevye adds, “You may ask, why do we stay up there if it’s so dangerous? Well, we stay because Anatevka is our home.” That is the problem with the play. No civilized man strives to preserve his ways merely because those ways are his. He grapples with their extinction because those ways are right.

On the contrary, Fiddler on the Roof paints a society of traditional Judaism as if it were suspended in time and soon to be sucked up into a more enlightened modern age. But Tevye’s traditions are actually timeless Jewish principles. It is an ancient heritage long predating Tevye’s time and still existing today in our century and in our country. In fact, many times before dress rehearsals, the cast and crew of Fiddler on the Roof productions prepare by visiting their local Orthodox synagogue to make sure they are getting the aesthetics accurate. But do they ever look beyond the aesthetics and ask the communal members, “Why do you live this way?” If so, in the confines of a shallow, limited script there is never an opportunity to showcase the answer.

The life they are drinking “L’Chaim!” to in Fiddler on the Roof is not a life anyone in the audience would really want for themselves, nor would the actors. Secularized Jews enjoy this play immensely because it reminds them of their ancestors, but watching it never inspires them to live like their ancestors and return to their birth religion. These commandments from God are shown to be nothing more than relics of an antiquated, unenlightened era. While we feel sad for Tevye that his culture is lost, there is never a compelling case made for that culture. Only because the Czar represents a great evil do we lament the conquest of Anatevka. When the curtain closes and the talented performers take their bows we still never actually feel sorrow for the life Tevye is leaving behind.