Have You Seen the “Bone Church”? 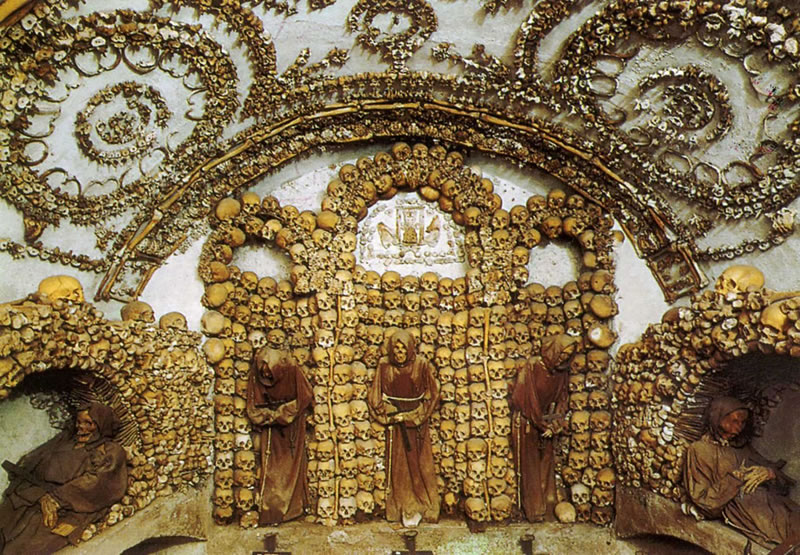 When I arrived in Rome for my study abroad program in 2000, one of my first visits was to the famous “Bone Church.”

Marquis de Sade said of it, “I have never seen anything more striking.” Mark Twain called it “a spectacle for sensitive nerves.”

The “Bone Church” is actually the crypt of the church of Santa Maria della Concezione dei Cappuccini, owned by the Capuchin monks. (By the way, “Capuchin” is the origin of the name of the “cappuccino” coffee drink, so called because the color of the drink resembles the color of the monks’ robes.) The crypt contains the bones of around 4,000 monks, which have been creatively arranged as decorations in five separate chapels.

The decorations include altars with skulls, arches made of femurs, and chandeliers made of ribs.

Nowadays we are probably more separated from death than people in the past, and tend to think of such displays as unnecessarily macabre. However, the Bone Church is in line with a long tradition in Christianity – nay, in history – of reminding human beings of their mortality. The sign as you enter reads, “What you are now, we once were; what we are now, you shall be.” The purpose of such reminders of death – whether it be an hourglass on a desk, a prayer uttered before sleep, or a church made of bones – is so that men and women will use the time they have wisely.

As the Latin saying goes, tempus fugit – “time flies.” We will not live forever; our lives are quickly passing by. Is it good to have regular reminders of death? Do such reminders help us to truly live?