Boomers: You Made Us 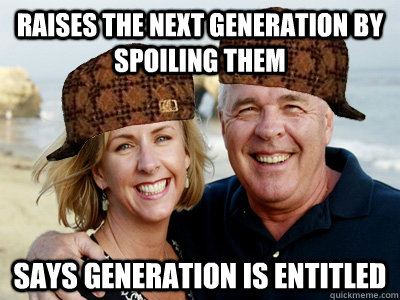 At a reception a bit ago, a Baby Boomer asked, “Will the Millennials be able to get their sh*t together?”

If you interact with Boomers or older Americans, especially those hiring and managing Millennials, you’ll hear it a lot. There’s certainly some truth to the idiosyncrasies occasionally displayed by Millennials about wanting high-pay straight out of college, work-from-home options, flexible schedules, a quick path to becoming CEO, etc.

If you’re a Boomer and worried about the future of Millennials, maybe you should consider how your generation raised its children. You may represent the tail of the curve and did things right, but ultimately when it comes to generational patterns the bell curve matters.

The Millennials are self-centered? Could that be because the “Me” generation raised us? Maybe we learned by watching and not listening.

The Millennials need an education on reality? Wait, who was in charge of our educations and raising us?

The Millennials think they’re special snowflakes? Again, who raised them to be such?

The Millennials want high-pay? Who told us to go to college and take on boatloads of debt? Frankly, here at Intellectual Takeout we’ve had individuals apply for jobs straight out of college and ask for $60k or $70k – they weren’t engineers or bio-chemists. When asked why they wanted so much, the response was often a spreadsheet listing the expected expenses, with $800 or $1,000/month in school loan payments alone. And when it comes to mortgage payments, consider the following:

In other words, even after the housing collapse, a home today costs approximately three times as much as a home in 1970 compared to the average wage that a person earns.”

The Millennials should have worked through college? Here’s a long response from The Simple Dollar:

So, let’s say you’re earning minimum wage and trying to make it through college.

In 1970, you could work 755 hours at a minimum wage job over the course of a year to earn enough to pay for a year of schooling at a public institution – about 14 hours per week.

In 2010, you would have to work 1,823 hours at a minimum wage job over the course of a year to earn enough money to pay for a year of schooling at a public institution – about 35 hours per week.

In other words, in 1970, you could work a part time job as a cashier or something to that effect and easily pay for college, enabling you to work and attend college without going into debt. In 2010, you have to work a full time job to pay for college, meaning you essentially have to choose between debt and an education or some other difficult plan.

The Millennials have relationship problems? No kidding. Perhaps a generation who was heavily impacted by rampant divorce and single-parenthood didn’t learn much about relationships, loyalty, and sacrifice from their parents.

The Millennials have trust problems? See above.

The Millennials are Godless? See all of the above.

The Millennials are selfish and want the economy to serve them? Right. Which generation runs Wall St. and DC right now? Which generation will actually see Social Security, Medicare, etc. work for them?

The list could go on and on, but you probably get the point. In the end, demographics is everything. And when it comes to demographics, within the next 5-10 years the Millennials will be firmly in control of the future of the country.

Rather than constantly ripping their children, perhaps it’s time for Boomers to invest in them and make up for what didn’t happen long ago.